AFC Wimbledon supporter Mark Wood has talked passionately about attending a future match at Plough Lane – and he has promised to make it extra special by bringing along his World Cup winners’ medal!

The Durham fast bowler, who has supported Wimbledon since the 1990s, played a key role in last summer’s glorious England victory. We previously hosted Mark as a special guest for a match during our 2015/16 promotion-winning season and he spent a long time after the game meeting our supporters, who posed for pictures with his Ashes medal.

Though he’s been busy getting back into training with Durham recently, he’s made time to look at pictures of our new stadium on social media – and he can’t wait to visit Plough Lane.

“I did bring my Ashes medal last time, so maybe this time if I come to Plough Lane I will bring my World Cup medal! I’m sure ‘Morgy’ (Eoin Morgan, England captain for limited overs matches) would help as well, and we will try to get the World Cup down at some stage. I took the World Cup to my local cricket club and that was a fantastic day, so I will do my best to do the same for Wimbledon.

“It feels like the real home. All the songs when I first started going to watch Wimbledon, that’s what they were about, and the place had fantastic memories for fans. It’s not just about the development, but all the hard work that has gone into it by a whole host of people, it’s their dreams. The fans and myself are excited, so the players must be desperate to get out there. I’m sure no stone will be left unturned and it will be a huge success. It’s hard to say what it will be like, but the pictures are awesome. It will make other teams jealous, but it doesn’t bother me because it will raise the profile of the club even more.”

Mark was speaking during an extensive Zoom chat with Rob Cornell. You can watch a clip below and the full interview is at the bottom of this page.

Despite being invited to Newcastle United – a club much closer to where he was brought up in Ashington, Northumberland – Mark hasn’t wavered in his allegiance to Wimbledon.

“There are plenty of times when people get confused,” added Mark. “They hear my Geordie accent and they automatically assume I’m a Newcastle fan. I have been to some Newcastle games – we got invited by the Premier League after we won the World Cup – and my best friend is a Sunderland fan, so I am spoiled in the north-east because I can constantly stay on the fence! ‘Who do you support?’ is often what they ask and when I tell them, they say ‘Wimbledon, really?’ I then have to explain that my favourite colour was blue, I had a sticker book, and Hans Segers looked like my Dad, so that’s how it all started.

“Wimbledon used to send me kits and little packs with toothbrushes and other stuff. They would get sent to my address and I thought the way Wimbledon looked after young kids back then was great. I used to get sent signed pictures of my favourite players at the time. I think I have the one of Robbie Earle still and I used to love that about the club. The people were so driven to look after their young fanbase. It was brilliant.” 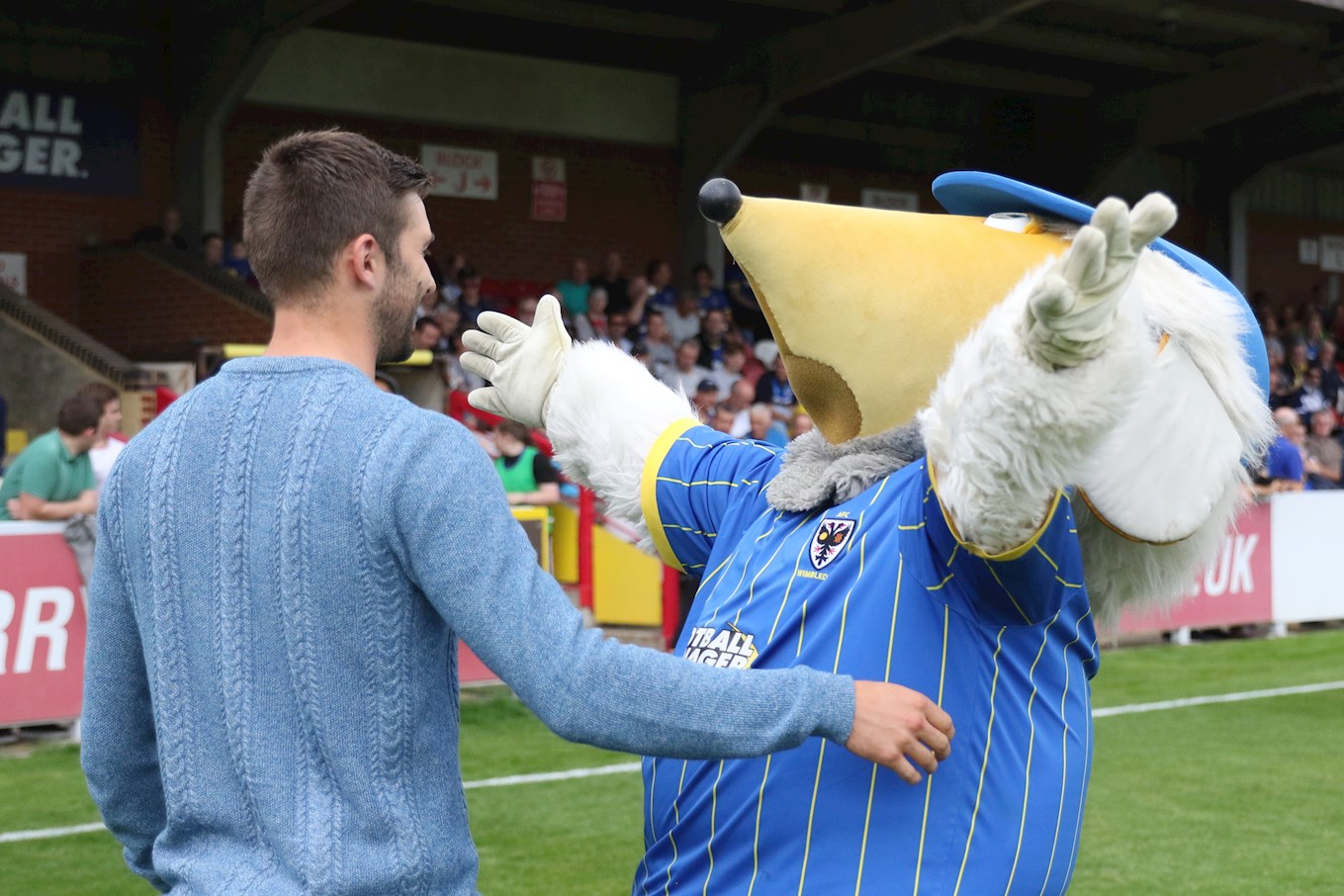 Mark has also enjoyed banter with big Accrington Stanley supporter David ‘Bumble’ Lloyd about our epic play-off semi-final victory in 2016 against the men from Lancashire. However, he’s been careful not to push it too far due to Bumble’s role as a commentator for Sky Sports!

“We have spoken about it (that semi-final). If we’re on tour Bumble is part of a card school and I like to have a game of cards as well,” added Mark. “If we are sat in the airport we will have a game together. He’s so passionate about Accrington Stanley, he loves that club, and his knowledge would be up there with most supporters. He knows the club inside out. When I mentioned that I was a Wimbledon fan, he said ‘they beat us!’. I didn’t want to rub it in too much because he’s got to commentate on me! I couldn’t say too much in case he hammered me when I was bowling! He’s a great character and to have a guy who supports a lower league team is quite nice for myself, so that we are not just talking about the glitz and glamour of the top division.”

With the Plough Lane Bond having raised over £5.2 million for the new stadium and the Dons Local Action Group doing remarkable work in the community, Mark offered high praise for the work of our volunteers.

“I think the word ‘outstanding’ doesn’t do them justice,” added Mark. “The fact that they’ve kept the club as a fans-owned club and have kept the dream alive in terms of going home. More importantly, with everything that’s going on, the volunteers have helped vulnerable people. To throw on the shirt, the hat, or the scarf, and to say ‘we represent AFC Wimbledon, this is what we’re about’. We’re about helping people, we’re about hard work, I think that speaks volumes for the club. It’s always been a club that’s close to my heart, but I’m sure other clubs will see the hard work that Wimbledon are carrying out. They will see that as a huge positive that ‘little old Wimbledon’ was the cry in 1988 when we won the FA Cup by beating the giants Liverpool and ‘little old Wimbledon’ are doing big things in the community now. Whether you are a Wimbledon fan or not, our fans are there to help.” 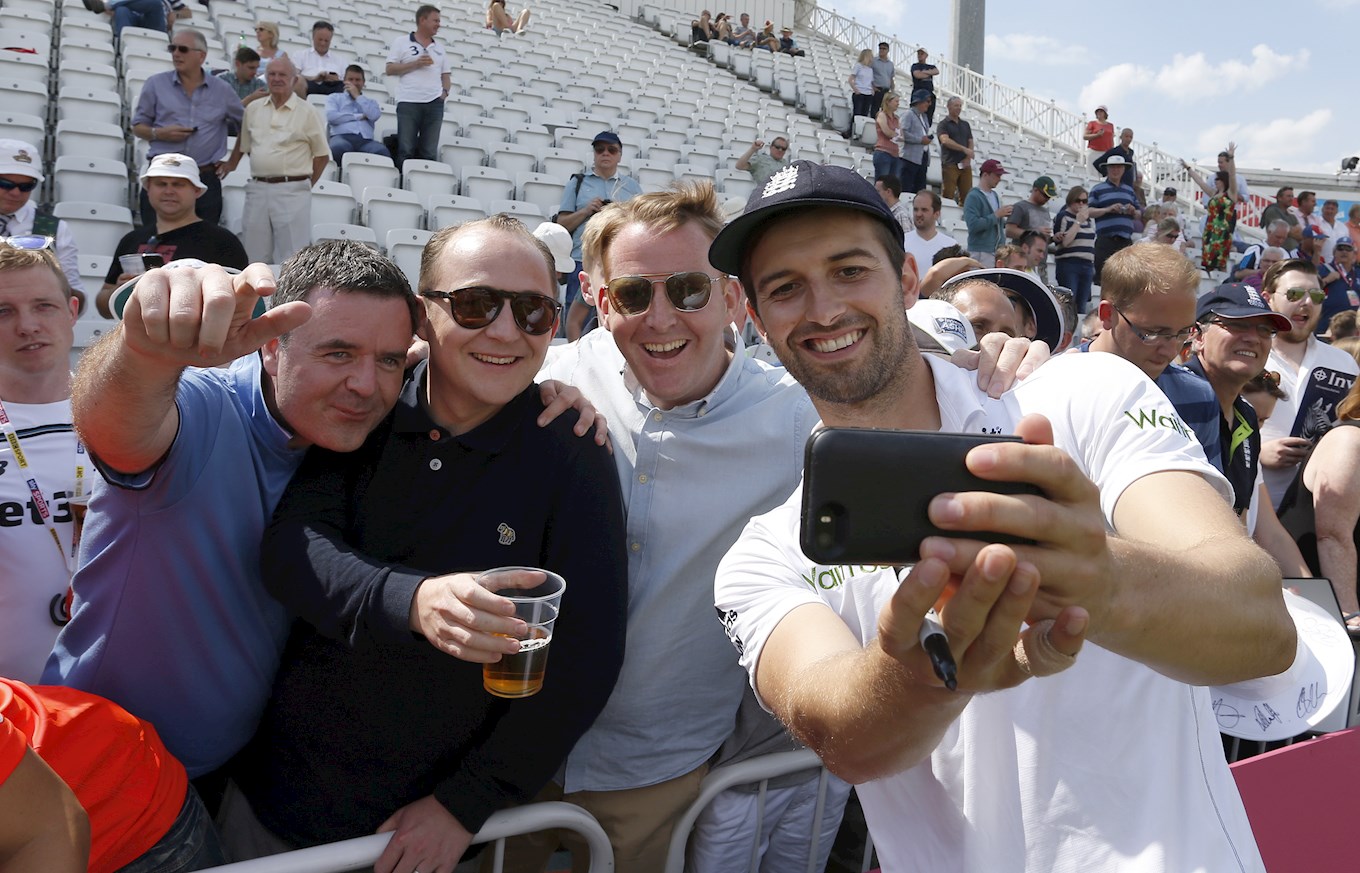 In his interview, Mark gave a mixed review on Ivor Heller’s cricketing abilities and his bowling action! Our Commercial Director recently showed off his cricket skills as one of his daily challenges on Twitter.

Mark said: “The thing that struck me first is that if he wants to get anything out of the pitch he’s going to need a ball that hasn’t got an Emoji face on it! I think he needs a proper cricket ball with a seam so that he can get a bit of movement! It’s not a bad action, a good run up. He was aiming for the stumps, and he missed it with his first bowl, but with practice I’m sure he will get there. I wouldn’t give him the new ball, but he will probably be first change!”

However, Mark had heard completely different things about the cricket ability of our striker Joe Pigott, who was an academy player with Kent.

“I’ve heard that he’s got a bit of gas actually! He was a quick bowler, ‘Farby’ (Paul Farbrace, England Cricket Assistant Coach) had him, and said he was a good cricketer. If we switched roles I’m not sure I could do as good a job up top! If he fancies a go at a bowling partnership with me, I will get him on the other end, and we will have a go together. Maybe it could be ‘Feed the Pig and he will bowl’ and we will do a role reversal!

In his interview, Mark also talks cricket, including getting back to training with Durham, and changing his bowling action for the better. Click on the link below to watch the full interview.