Just a couple of weeks after he signed for Wimbledon in January 2019, an extensive interview with Shane McLoughlin featured in our match day programme, charting his rise from playing local football in County Kerry.

We earlier today announced that the club had taken up the option on Shane’s contract, therefore prolonging his stay at AFC Wimbledon.

Shane is pictured above on the day he signed for Wimbledon and the interview for the programme is reproduced below.

Having grown up in a part of Ireland where Gaelic Football is the number one sport, Shane McLoughlin has never been one to take the easy option in life and that certainly hasn’t changed now.

Shane, who has made an impressive start to life at Wimbledon, was still playing Gaelic Football in his home county of Kerry until the age of 14. However, making it as a professional footballer in England was always his priority.

“Where I come from it’s not the easiest to break into football,” said Shane. “Kerry is more known for Gaelic Football and there are not too many players from my home county that come over to England to play football. I never really thought about making it in Gaelic Football, I just played it for social reasons. I never played to a high standard as I just played for Castleisland, my local team, but I felt I could have gone higher. I never really pursued it as I didn’t see it as something I wanted to do. I have friends that play Gaelic Football to a high standard.

“I used to play Basketball and Gaelic Football, but becoming a professional footballer is what I always wanted to do. Ever since a young age I wanted to be a footballer and play in England. Irish football has become better in recent years, but I just wanted to come over to England so that I could test myself against the best. I always watched football over here when I was a kid.”

Shane’s big chance to make it came over here came when he signed for Championship club Ipswich in 2013. Progression through the ranks followed and he went onto make two first-team appearances for The Tractor Boys. Though he could have stayed put at Ipswich in January, Shane’s determination to earn first-team football shone through as he earned a deal at Wimbledon after a successful trial spell.

“I wanted to go somewhere and prove that I could do it, to show that I deserved a chance. When I first came down here and met the players and staff, I believed it would be a good fit for me. I came down and trained here for four or five days before I signed. That helped because I got to see what everyone was about. I got the impression that everyone wanted to get us out of the position that we are in at the moment.

“I think the main thing for me is getting games under my belt and learning both sides of the game, on the ball and off the ball. I feel that I’ve made a positive start, it’s been as good as I’d hoped for. To come in straight away and be playing, it’s been good to make my mark here. Being presented with the Man of the Match award in the bar was different to anything else I’d experienced! I enjoyed it though and it shows that the club tries to keep the fans involved in things.” 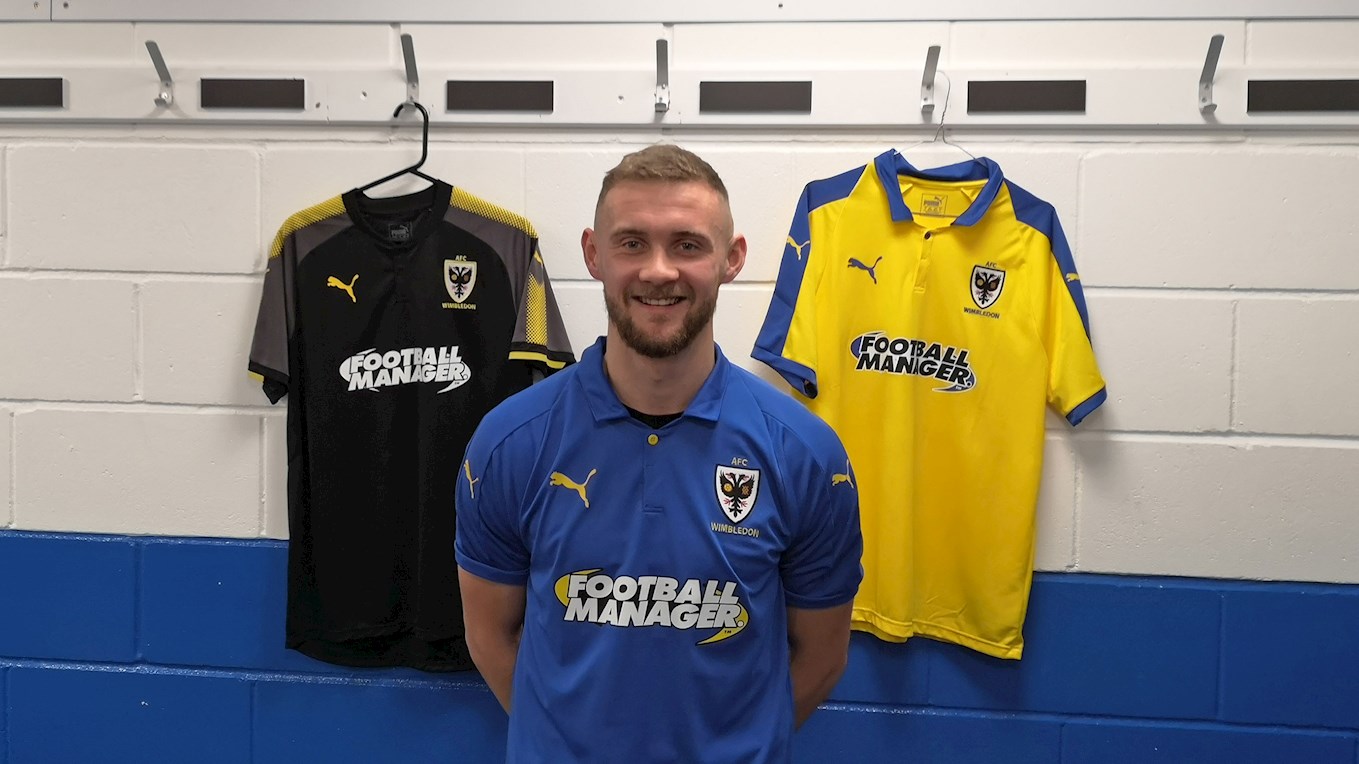 Shane certainly knows all about the AFC Wimbledon story as his uncle David is a Dons supporter. The midfielder has also been helped to settle in by his fellow Irishman Dylan Connolly with the pair currently staying in the same hotel!

“I was 16 when I moved over to Ipswich and it was difficult at the start. I just wanted to play every day. I am staying at the hotel in Surbiton at the moment, just while I’m looking for somewhere. Dylan is in the room across the way from me, he never leaves me alone! I knew Dylan from Ipswich days and Woody too as he was at Ipswich too. When I first came to Wimbledon at least I knew people, so that was a good start.

“My uncle David has watched Wimbledon for years and Ivor knows him. I have other family around London too, so that does help me to settle in. I have got two uncles that live around here and cousins. I already knew a lot about the history of the club before I came here, about how the fans set-up the Dons Trust and the club had to progress through the leagues.”

Shane, who was born in New York but moved over to Ireland when he was young, started playing football from a very young age, but his big break came in 2012 after impressing for his county team.

“I played a little bit in America when I was about three or four. I remember kicking a ball around back then as my older brother was playing for a team in the Bronx, so I got involved in that. When I moved to Ireland I played for my local team called Castleisland in Kerry. I was probably five or six when I started playing for my local team. When I was a young boy I always ended up playing against kids two years older so that helped in my development. I was playing against older kids that were probably better than me at the time, so I had to keep stepping up.

“When I was starting out my coach Tim Collins, back in Kerry, helped me a lot. I followed him around to a few clubs. Castleisland was my local team and then I moved to Killorglan because I had worked with Tim for the county team. He was with the county team and was the best coach around at the time. Then we moved to St Brendans Park. I was there for just a season and then I went to Ipswich. I felt that playing for Tim would give me the best opportunity of progressing. All of the coaches I worked with back home gave me belief that I could succeed as a footballer.

“I was playing at the Galway Cup in 2012 for Kerry, my county team, and scouts asked me if I wanted to go on trials at a few clubs. From the moment I went to Ipswich I felt comfortable there. I thought, ‘if they offer me a scholarship, I will go’. I got offered a two-year scholarship, so I decided to go for it.”

Though first-team appearances followed at Ipswich, Shane felt that his progress had stalled there and he believes it was the right time to move on.

“I started a League Cup match against Crystal Palace and I came on too in the last league match of the season against Middlesbrough. It was an unbelievable feeling to make my debut. It was a bit weird against Palace because I think we had an average age of 20 with a lot of young players in the team. We coped fairly well with it though and we only lost narrowly on the night.

“It was a very close-knit club, I got on well with everyone, including all the backroom staff, coaches, and even the laundry ladies. I settled very well there, but I wasn’t getting the opportunities that I wanted, so I decided to leave.”

During his time at Ipswich, Shane became known for playing in several different positions. Wally Downes said after signing Shane that he had tracked his progress for years, even when he was coaching in India, and the player is eager to repay the manager’s faith in him.

“The manager’s interest shows that he believes in me. He thought that I could come in and help out. I feel that it will give me confidence. I could have stayed at Ipswich and I had a few other options, but once I heard about this and I felt there was an opportunity here, I felt it was the right move for me.

“I think central midfield is my best position, but I’ve played all over the pitch in the last few years. I feel comfortable in most positions. I want to play as many games as I can, to keep improving, and to help us out of the situation that we are in.”

Take a look below at a short video containing Shane’s best moments in a Dons shirt so far, and a few interview clips from his time with us.