Ryan Patel earned headlines at the age of just 20 when he claimed six wickets in 11 balls and the Surrey all-rounder has certainly hit the mark in a completely different challenge this summer!

For the last three months, Ryan has made a vital contribution to the Dons Local Action Group, putting in the hours to provide emergency food for those in desperate need during the Coronavirus crisis. Now back to his bread and butter of cricket training at The Oval, Ryan headed there this week with a feeling that he had made the most of his extended break from the sport.

“It is pretty special that a group of people who don’t know each other can come together in this way to help the vulnerable in society,” said Ryan. “Some of the volunteers don’t have any association with Old Ruts or AFC Wimbledon, but they’ve shown a lot of generosity and given up so much of their time to help. Volunteers have their own commitments, including looking after kids, working from home, or going back to work, but they have made time to help. The Dons Local Action Group has over 1,000 volunteers and that’s pretty amazing. How it has all grown in the last 14 weeks is remarkable.

“I’ve known Craig Wellstead, President at Old Ruts, for a long time because he’s good friends with my Dad. I remember the initial e-mail sent around to those people involved at Old Ruts and Craig had decided, along with Xavier, to set-up a food hub for a community project. I remember it starting on day one and I popped down to see how it was going. People were donating, but it was on a much smaller scale. To see it all grow from day one has been pretty amazing.

“At the start, I was on deliveries and delivered food to houses. More recently, I was working at the front of Old Ruts and getting the food parcels ready for drivers to deliver. My role involved looking at the list and preparing the boxes ready for delivery – it would be like a drive-through here on Thursdays, Fridays, and Saturdays! Craig takes the mickey out of me by saying that I’m always around! I was down there every day and I did my best to help out.” 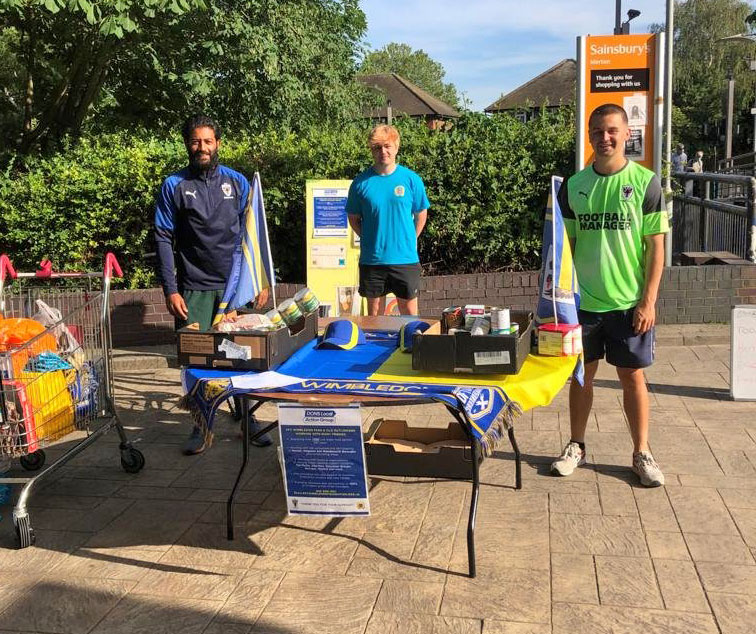 Having been brought up close to Old Rutlishians’ Association, Merton Park, Ryan played for his local cricket club as a boy. Though he’s not an AFC Wimbledon supporter, his involvement in the last few months with the Dons Local Action Group has brought him closer to our club and the prospect of attending a game at Plough Lane in the future is something that appeals to him.

“I’m an Arsenal fan, but Craig has been an AFC Wimbledon supporter for a long time, so I always hear bits and pieces about the club,” said Ryan. “I live about 30 seconds away from Old Ruts! I’ve been a part of Old Ruts virtually since the day I was born! I played cricket at Old Ruts until I was 16 and then I moved to Wimbledon Cricket Club. I was about six or seven when I first started playing cricket at Old Ruts and it’s a great club.

“I have more of an interest now in AFC Wimbledon because I’ve been involved with this. I’ve met Simon Bassey, who was at AFC Wimbledon for many years, and I got on well with him during this project. I’m getting more interested in what’s going on at AFC Wimbledon, especially because the club is moving back to Plough Lane.

“I’ve seen the images on social media of the new stadium and it looks very impressive. It will be nice to attend a game in the future. There are people involved here as volunteers that are not AFC Wimbledon supporters. They’ve been wearing the club colours, including the scarves, and maybe it will attract some of those people to a game at Plough Lane. There’s no reason why they wouldn’t want to follow AFC Wimbledon, or at least to show support for what the club stands for.

“I can’t speak highly enough for what the people involved at the club have created. Volunteers helped back in 2002 to build the club up again and the Dons Local Action Group is a project that has rightly attracted attention for what has been achieved in the community. Maybe AFC Wimbledon will now be my second team!" 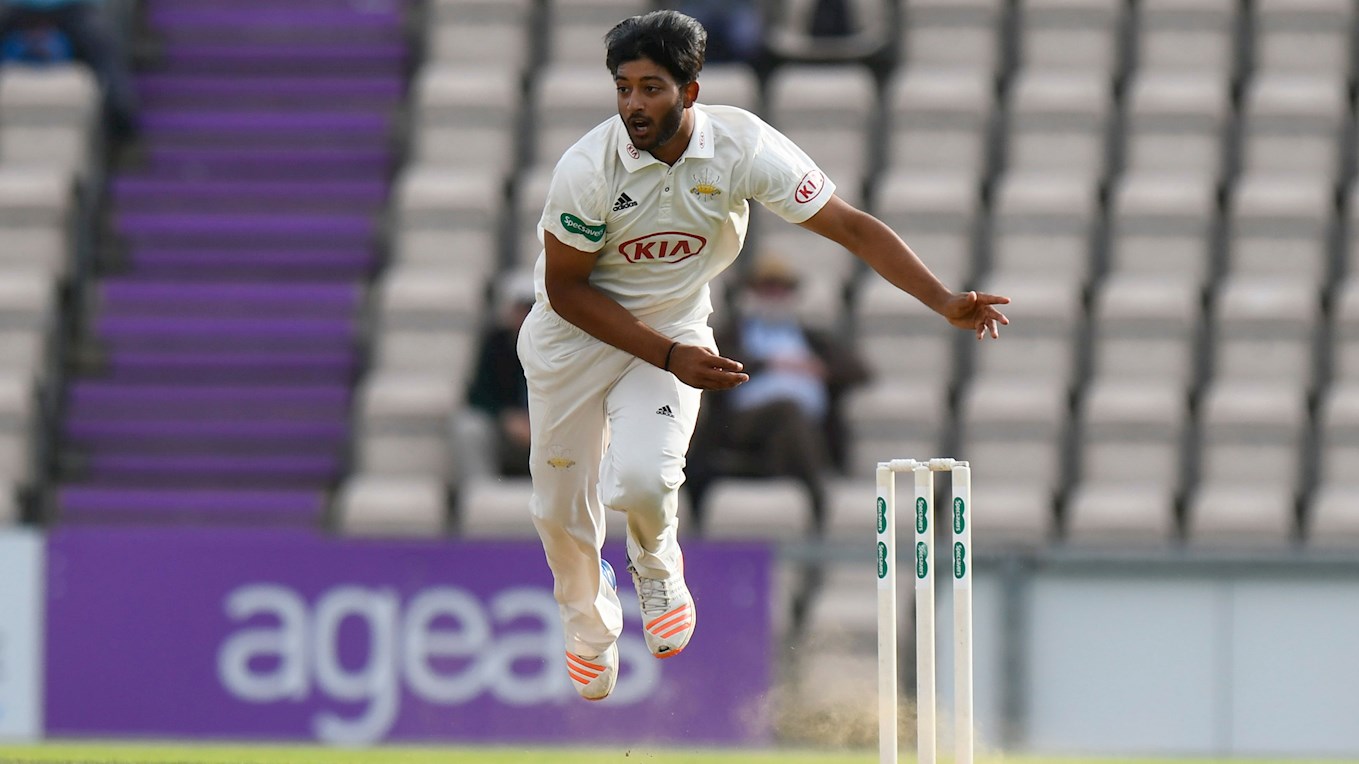 Ryan had spent the winter playing university cricket in Australia and he came back raring to go for the new season in England, before Covid-19 and the lockdown changed everything. The 22-year-old was therefore grateful to fill his time by doing something worthwhile for the community.

“Being involved with the Dons Local Action Group kept me busy, especially at a time with no cricket,” added Ryan. “I am always happy to help and it’s a great cause, but another reason I’ve been so involved in it is because boredom really hit me, especially when lockdown first started. There was no cricket for me whatsoever, so this involvement kept my mind away from reality a little bit. I had chats with other volunteers and and it kept my mind off what I could have been doing. I would sometimes look at the calendar and think, ‘I could have been playing at Kent or Nottinghamshire today,’ but being involved with the group helped me to focus on something else.”

This post from the Surrey County Cricket Club Twitter account certainly showed that Ryan is enjoying the surroundings back at The Oval and he looked sharp in this training video!

A landmark moment for Ryan in his fledgling career came two years ago with his maiden five-wicket haul in first-class cricket, claiming six wickets in just 11 balls against Somerset. Now viewed as one of the rising stars of his sport, Ryan is edging closer to his dream of playing for England after coming right through the ranks with Surrey.

“I had my first full season with Surrey when I was just nine years of age and I’ve been through every age group into the senior set-up,” said Ryan. “It’s pretty cool to say that I’ve come right through the system and I’m proud of that. Ollie Pope also came through the ranks, I’ve been playing alongside him since I was nine, and Sam Curran came in when he was 16. We are a very close-knit squad because quite a few of us came through the same age group. Watching their progress makes you want it a bit more. I’m not just watching people six or seven years older than me do well - players my age are making their mark at senior level. They are stepping up to international test cricket and making their mark, so it provides you with something to aim for.

“It’s definitely my goal to play test cricket for England. In my mind that is the pinnacle of cricket. It’s the oldest and longest cricket format that you can play with a lot of tradition. That is the aim – to play test cricket for England. I had a taste of it with England Under-19s and although that’s not the full experience, it still gives you that opportunity to represent your country. It provides you with the motivation to want to do it on the biggest stage of all.”

To volunteer for the Dons Local Action Group, contact 020 3301 4511 (9am-6pm), or e-mail dla@afcwimbledonfoundation.org.uk . If you can donate a computer device, please visit the Keep Kids Connected website .