Newcastle supporter Kevin McArthur was quick to accept the challenge of turning the Dons Local Action Group’s Wandsworth hub into a ‘well-oiled machine” – and family members were among his first recruits!

Kevin provides another fine example of the community spirit encapsulated by a squad of over 1,000 volunteers, who have chipped in to help those in crisis. Though not a Wimbledon supporter – he heard about the Dons Local Action Group through his son’s local rugby club – Kevin has grafted from 8.30 am until 6.30 pm every week day since 4 April.

With his wife Harriet and children Cameron (12) and Cordelia (14) also helping, Kevin believes his family will be proud of their involvement for years to come. And the ethos of AFC Wimbledon as a real community club means that he plans to get a Season Ticket for him and his son when we move back to Plough Lane. Kevin’s life will also have turned full circle as he previously worked at the old greyhound stadium on racing nights.

“You don’t want to blow your own trumpet, but I think we will look back and be proud of what has been achieved during this time of crisis,” said Kevin. “We’ve done something to help our community, rather than sitting back and watching people struggle. My wife has been a driver for the group and been involved in packing food for distribution. During the Easter holidays my daughter did 11 days in a row with me. She was doing 8-10 hours a day. Hopefully, Cameron and Cordelia can help out for three days a week when the summer holidays come around.

“I support Newcastle United, but I live close by the new stadium – it’s just a two-minute walk away! I am from a bookmaking background, so I actually worked at the dog track as well. Even prior to helping out for the Dons Local Action Group, my intention was to look into getting a Season Ticket for me and my son. It will be ideal, once the stadium is completed, to be able to walk to a football ground, watch the match, and then walk home.” 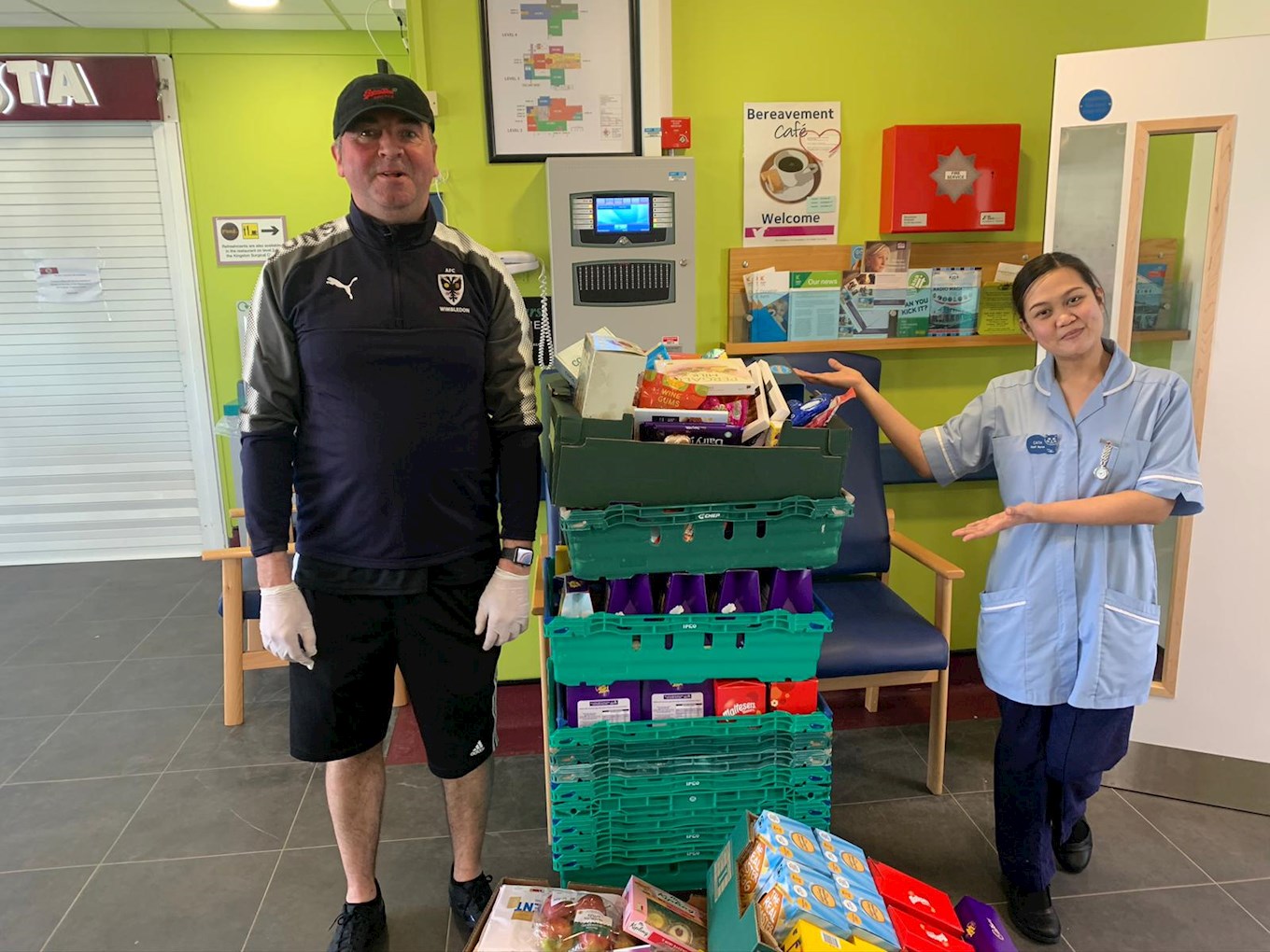 Kevin knows all about the remarkable AFC Wimbledon story, and he believes that the Dons Local Action Group is something everyone connected with the club can be proud of for different reasons.

“I would say that the greatest achievement of AFC Wimbledon was getting the club up and running again before the promotions followed,” said Kevin. “Going back to Plough Lane is a huge achievement. First and foremost, AFC Wimbledon is a sports club and what it has achieved is fantastic. If you look at it socially, the Dons Local Action Group will be the club’s greatest achievement. None of the clubs around London are doing anything as big as this for the community.

“AFC Wimbledon is a relatively small community-based club, so a lot of kudos must go to the fans that started this project. Cormac (van der Hoeven), Xavier (Wiggins), and Craig (Wellstead) deserve a lot of credit for this, but the volunteers do too as they have bought into the AFC Wimbledon ethos. It’s a great achievement and it’s certainly good for me because I love sport. I can always talk about that to other volunteers. A lot of volunteers I’ve met are not AFC Wimbledon fans, they are from a rugby or a cricket background, but they are just happy to help their community. It’s very noticeable that AFC Wimbledon are doing a lot of good for the community.” 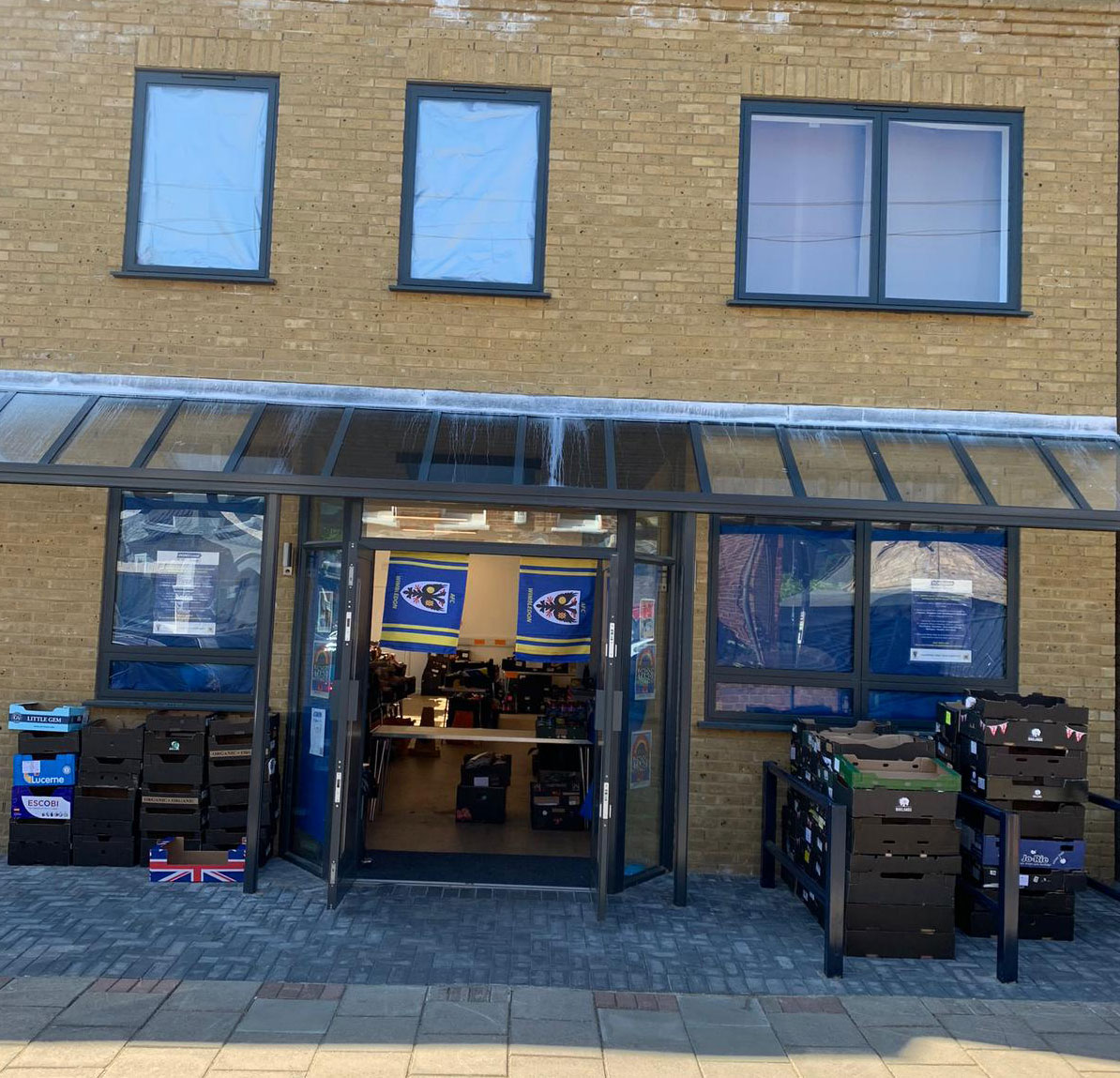 Having been furloughed in his job, Kevin was quick to put himself forward as a volunteer – and his dedication to the cause meant that he was trusted to head up the Wandsworth distribution hub, based at Brathway Hall.

“My son’s rugby club Wimbledon Warriors are a part of the Old Wimbledonians Association,” said Kevin. “A guy called Dave Doran put a tweet out saying that an organisation had just started up with the aim of helping the community and they were looking for help.

“I have my own company that does security auditing for bookmakers, but that’s been on the backburner due to the circumstances of the last few months. With my other job, I’m furloughed until July, but I have a feeling it will be longer because I work at a Bridge Club, where the participants are predominantly older. It’s impossible to be one metre away from each other because you are all around a table. I don’t think we will be opening soon. I am just waiting to find out about that. I was furloughed on 16 March, so I started with Dons Local Action on 4 April.

“I went down to Kingsmeadow and about 10 of us were there, including Xavier and Craig. It was the beginning of lockdown and we were all socially distancing. Craig just asked if anyone there could do spreadsheets and I put my hand up. He said ‘right, you’re in charge!’

“Initially, I set-up the Kingston distribution hub with Xavier and other people including Laura, and a guy called Murray, who was doing the weekends. I set-up the group of phone teams with volunteers answering calls to those in need. I was there for about two weeks and then Xavier said ‘do you want to come and set-up a hub in Wandsworth? It’s not just me and I’m fortunate that there is a group of us putting in big shifts every day.”

Though it’s certainly long hours, Kevin says that the feedback from the community, including thank-you messages, makes it all worthwhile.

“It’s a lot of hard work, but I’ve said all along that it’s a strange paradox,” added Kevin. “We are incredibly proud of what the community is doing for people, but the flip side of it is that it’s very sad. I sometimes think ‘what would these people have done without the Dons Local Action Group?’ A lot of people we are helping are still going to be in this position when we come out of the crisis. The poverty side of it should be a governmental issue and perhaps we should not be filling that gap, but we are happy to help in any way we can.

“The spirit amongst the team of volunteers is very good. All it takes is for one person to say thank-you and that makes your day. We get cards sent to us and messages of thanks on social media. It gives you a boost because it lets you know that what you are doing is appreciated. Ultimately, volunteers are working very hard. Some volunteers are doing 8-10 hours a day and having to work things around their work and home life.

“I help with all new referrals for food, either by e-mail or What’s App, and I get forwarded referrals from the Helpline. We’ve got our own database and we try to give out personalised boxes, so we phone them up and ask for their dietary requirements. If they have young children in the house we ask for nappy sizes and we even go as far as getting a birthday cake and cards for people.

“We have a group of people that do all the packing and we have a group of drivers, so it’s a well-oiled machine now. The drivers know exactly what they are doing and there’s a certain area where the drivers know to pick up food parcels. There’s another area designated for the items coming in from the supermarkets. The hub is set-up in a way that you start on one side and by time you get to the other end you have packed each individual box.”

The benefits of being involved as a volunteer are summed up by the difference Kevin says it has made to his life.

“It has given me a bit of structure, especially in the early lockdown days as I think I would have gone a bit stir crazy being at home all the time! I do this on Monday to Friday and weekends I try to switch off and spend time with my family, but you are still getting the e-mails and What’s App messages. Some days are really full-on, but other days – because we’ve got it down to a good routine – go smoothly. We are a seven-day a week operation and, ultimately, people need our help.”

To volunteer for the Dons Local Action Group, contact 020 3301 4511 (9am-6pm), or e-mail dla@afcwimbledonfoundation.org.uk . If you can donate a computer device, please visit the Keep Kids Connected website .