The club wishes to thank all our Wimbledon supporters in the NHS and emergency services for their fantastic work at such a difficult time.

To highlight the challenges that NHS workers face due to Coronavirus and the importance of their roles, we spoke to two Wimbledon supporters who are currently doing difficult jobs to combat the virus.

William Ricketts, a Consultant Chest Physician at St Bart’s and the Royal London, said: “My wife is an Oncology Physio at St George’s in Tooting, so we are both very busy. I find the numbers on the TV don’t feel real, but to give some context that I think is more tangible, we normally have 30-40 Respiratory patients at the Royal London spread over two wards, but that number is increasing by the day and we are being asked to increase our intensive care capacity to about 10 times its usual level.

“The response from staff has been amazing. We are asking doctors, nurses, physios, and everybody to do things that they are not used to: surgeons are looking after medical patients, outpatient physios are looking after in-patients, junior doctors are moving from one speciality to another at the drop of a hat to provide the extra cover that is needed. Without exception, they are doing this with great enthusiasm and professionalism.  There is no doubt that this is a frightening time for everyone, but there is no complaining. Everyone is just mucking in and getting on. Even those who cannot work in the front line for health reasons are doing everything they can from behind the scenes: helping with emergency plans, doing telephone clinics, writing guidelines and policies. We are already seeing people that haven’t worked in the frontline for years getting involved. These people are downing tools from research and coming back into clinical practice. It’s amazing.

“I have looked after young people that normally would not be ill enough to be in hospital, but they have been sick enough to need to come in. Thankfully, they have all recovered, but this is not the case for everyone. The message has to be as follows: stay inside, otherwise you could be next.  I have also looked after some elderly patients who have not been so lucky. If people won’t stay in for their own sakes, please stay in for the sake of others as you may be silently spreading this too. Some people clearly don’t listen to the news or don’t believe it, so I hope that by hearing this from a different source, they may pay attention, especially from a community club like ours.

“I have been amazed by some of the things that I have already heard our fans doing, including phoning lonely elderly people, and helping with shopping.  This is what a fans club is all about. If we can help people stay indoors we are literally saving lives. Football saving lives, how amazing is that? I started supporting the club in 1987 when our school teacher (Tim Alexander’s mum) took minibus loads of kids to Plough Lane, including ‘Rocket’ (Robin Bedford) and me. I was hooked by the personalities of the Crazy Gang and have been a fan ever since, including being a season ticket holder since the 1990s.  I have been one of the club doctors for about 10 years and absolutely love it. Where else can you combine your hobby and your job?”

William is pictured above with Sue Painter and Rod McDonald. Sue had a cardiac arrest at a Wimbledon game last year and William gave her emergency treatment that saved her life.

David Heller, (brother of our Commercial Director Ivor), is Chief Pharmacist at Surrey and Sussex Healthcare NHS Trust. He said: “NHS staff are having a very difficult time in either dealing with massive numbers of Covid-19 patients or preparing for the influx. GPs, community nurses and community pharmacists are in the front-line, often the first contact point and facing worried patients.  Some people get angry if they can’t get what they want, which is not fair on the staff who are trying very hard.  In hospitals, we have seen a lot of patients in London with huge requirements on Intensive Care beds, and this need is spreading around the country now. This puts massive pressure on staff who are often being asked to work in new areas and learn new skills. At the same time, those staff have loved ones at home who are at increased risk and that adds to everyone’s anxiety. For example, one of my sons is a doctor currently looking after Covid-19 patients, then he goes home to his pregnant wife.  But these people, working in all areas of the hospital, keep on turning up and working because patients need them to do their jobs for the greater good.

“It is absolutely critical that people follow the advice and stay at home, unless they have to go out for essentials such as food and medicines. This is the best way to stop this virus. That means everyone because nobody is immune, including young and healthy people.  If you stay home, you’re far less likely to catch it and if you can’t catch it, you can’t pass it on. A number of my own staff have had to self-isolate, but that’s ok. I’d rather they did this so that they don’t pass the virus on to others. The more you all stay at home the more likely that we’ll flatten the incidence curve and so avoid overloading healthcare teams.

“Football clubs and players must help in getting the message across to fans. Let’s make use of the club channels and social media feeds to raise the profile of this message. If you take the NHS and reverse it you get SHN, short for STAY HOME NOW, so let’s really push this message. While not working, nor in full training, I’d want to see professional sportsmen and women volunteering to help the vulnerable and encouraging those who can volunteer to do so.

“There is so much that fans can do to help those most vulnerable in our community. The first thing is to volunteer, if you can - we need help to get shopping and medicines to people who can’t do it for themselves.  I’ve been a Wimbledon fan for over 45 years and we’ve always beaten the odds. Since AFC Wimbledon formed, we have run on large numbers of volunteers so we know what it means to commit.  So please commit now, either through the AFC Wimbledon fan initiative (Dons Local Action Group), the AFC Wimbledon Foundation, or the NHS Volunteer scheme.”

The picture below shows David Heller (right) with John Green at Wembley in 2016. 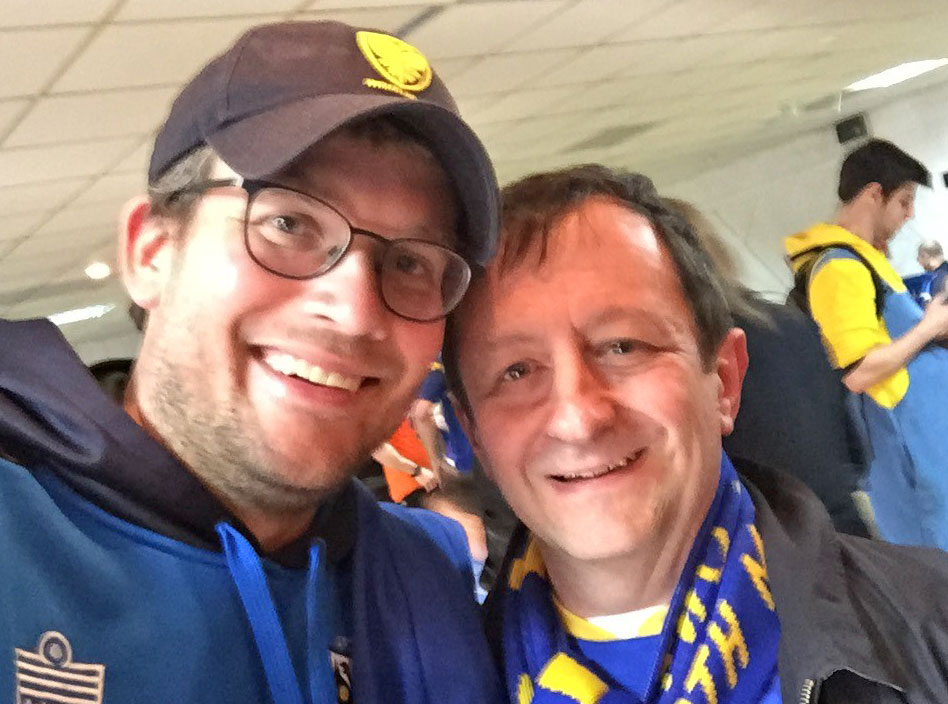 Are you a worker in the NHS or emergency services who has a story to tell? Alternatively, you may want to highlight the work of someone close to you who is carrying out vital work at this time. If so, please e-mail chris.slavin@afcwimbledon.ltd.uk .