Academy Manager Michael Hamilton is delighted to announce a new group of scholars for next season’s Under-18s squad.

The six young Dons will form part of the Under-18 squad for next season, alongside our current Under-17s (first year scholars who will be in their second year next season).

Michael provides a bit of information below about each of the young talents.

Ethan is an intelligent defender that can also operate in midfield. He senses danger well and is confident when he has the ball at his feet. Ethan (pictured below) recently joined us from Crystal Palace and has made a huge impact in the short time he has been with us. 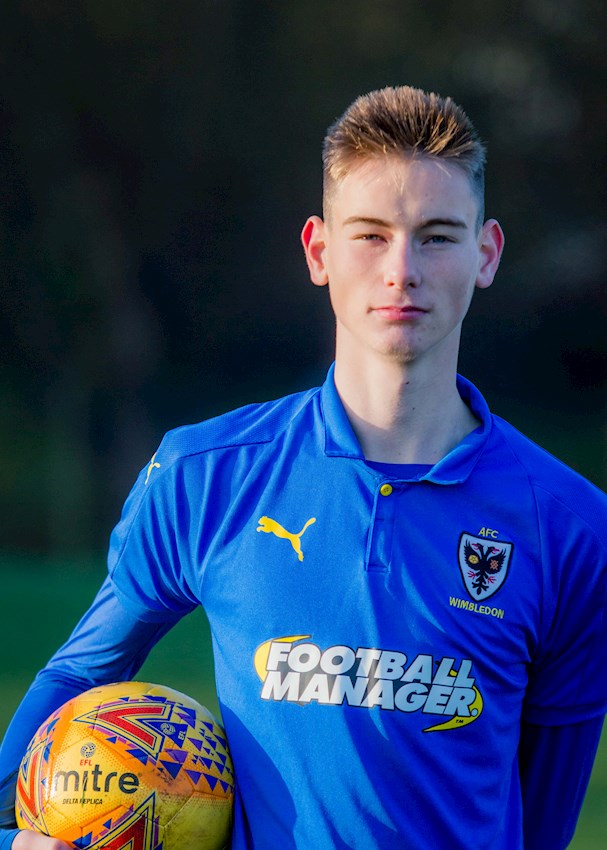 A tenacious player who has come up through the pathway predominately as a centre back. Ben joined the academy four seasons ago and embodies the AFC Wimbledon spirit, treating every session as if it is his last one.

Ben said: “I started to play football when I was five for Ascot United and I played there until I was 11 (when I came on trial at AFCW). I knew a bit about the club before from the famous 1988 FA Cup Final win, but after just a few months at AFC Wimbledon I started to realise what the club meant for everyone involved.

Since that time, the club and coaches have had the same effect on me, and I was very proud to sign, before becoming captain and leading every age group since. I try to train and play every day with a commitment that’s a part of the Dons DNA. I started very young as an attacker, but I always had a love for defending and it showed when I started to play centre-back for Wimbledon. I am now a full- back, who can also play centre back and I am loving it at this club.

I’ve moved up through the ranks with AFCW, often playing above my age group, and I also trained with the Under-18s for the first time when I was in the Under-12s, and that was a great experience. I will carry on doing everything I can to play for this great club.

A ball-winning midfielder who joined us at the end of last season from a grassroots club. Abdi’s attitude and application are second to none and he has made a massive impression on all staff in his short time here.

Left-sided full-back who likes to defend on the front foot and is equally effective in all thirds. Josh joined us at the beginning of 2019 after spending five years at Brighton & Hove Albion’s academy.

He’s only been with the academy since the beginning of the year after joining us from a grassroots club, but Aaron has already joined in training sessions with first-team goalkeepers and has displayed exciting potential.

Aaron said: “Since I have been at the club, it has really grown on me, and I’ve welcomed the philosophy. Since earning my scholarship only a few days ago, I have wanted to work even harder to prove that I'm ready for the challenge.”

Marcel is an attacking midfielder who has the versatility to play in a few positions. He is a very creative player, who has an eye for goal, as well as the ability to unlock defences.

Speaking about the development of the new scholars, Michael praised coaches at our academy for helping them to progress through the ranks.

“First of all, I would like to mention Ben Foshuene (Head of Talent ID), James Oliver Pearce (Lead Youth Phase) and Rob Tuvey (U18s Manager) because a lot of work has gone into this age group over the last 18 months or so in preparation for them transitioning into the scholarship programme.

As a management team, we are excited by the talent in this group and over the last few weeks we’ve done a lot of work around the psychology of success and what it takes to maximise potential. This group are raring to go and can’t wait to get back out on the pitch.

“They all have programmes to follow in this current climate and we have a few more virtual sessions planned to ensure that boys are reminded of their responsibilities as scholars. Hopefully, all things being well, they will be reporting back on July 1 and we can start preparing for what I’m sure will be another really strong season for all our age groups.

“Last of all, I want to say thank-you to all the parents and families of these boys, who clock up the miles taking the boys to games and training, standing on the sidelines every weekend to show their support. Without you, they wouldn’t be here, and I look forward to the boys repaying you with their hard work.”

The academy scholarship is a part-funded development programme that all Under-18 academy players sign up to when they are of school leaving age. Whilst 50 per cent of the funding comes from the club, the other 50 per cent comes from the English Football League, and, as part of the programme, players must study BTEC and / or A level courses at the club’s education provider (Southfields Academy).

The development programme consists of the following: 8 hours of football practice, 8-12 hours of academic education, and 3-5 hours of physical development.