As a community club, AFC Wimbledon provides a vital platform for students to build their careers and our academy recently earned recognition for this from a local university.

The academy’s medical department, led by Jenna Richards, who is Physical Performance and Medicine Manager, were nominated for the Outstanding Placement Provider Experience Award by St Mary’s University.

After receiving this nomination at the Work Placement and Internship Awards for the Twickenham facility, we caught up for a chat with Jenna about the opportunities we provide. Jenna (who is pictured above with Under-18s striker David Fisher) also talked about how this has benefited us as a club and her own role since joining us in 2012.

You can take a look at the Q&A with Jenna below:

How much do you pride yourself on providing a good environment for students to flourish?

“It’s a team game and it’s something we try to do well as a club. Stuart Douglas has also been involved in providing a good experience for the students that join us. In my room there are two medical beds and it is much better to get the students involved, rather than have them sitting around watching. I say to Michael Hamilton (Academy Manager) and Rob Tuvey (Under-18s manager) that the students become part of the medical team for the time that they are with us. They are made to feel a part of what is going on. The staff and players get to know them, finding out what they are studying and about their experiences. Sometimes the students travel with us to away games, which really gives them that hands-on experience. It’s a credit to our staff and coaches that the students are made to feel part of the team and that’s why they enjoy the placements with us. We’ve had good feedback over the years with students letting us know how much they enjoy getting that hands-on experience because they feel they are learning something.

“The students get an induction, which will cover things that they should wear in the workplace, and even what food they should bring because it’s important to set a good example in terms of nutrition, especially as we are trying to educate players. We try to give the students an awareness that our elite environment involves players working hard, so we should never give the impression to players that they are injured because they’ve worked too hard. It’s not usually because of that. Of course, I always go through the safeguarding requirements because they are working with Under-18s, so that all gets done beforehand. We stress that they are with us to work hard and to try and give our players the best opportunity of developing. That could be because they are injured and we need to aid their recuperation, or by helping them to stay fit and therefore on the pitch.”

It’s a long time since you joined us, which was back in 2012. How did that come about?

“A friend of mine seen an advert for an academy physio. I had graduated the year before and I had been trying to get involved in football since then. I even wrote to Mike Rayner, who was first-team physio, but he sent back and said that there was not really anything for me. When it came to the end of the 2011/12 season the academy were recruiting and I managed to get a start with the club. I worked with the Under-16s initially, including players coming through like Egli Kaja and Dan Gallagher. The season after I ended up going full-time with the Under-18s. It feels like a long time ago now!”

What has been the most satisfying aspect of your job?

“Just helping to get players onto the pitch, particularly after they’ve had a long-term injury. For example, Louie Cockle after he broke his leg. You take satisfaction from helping players like that back to fitness and those that have had career-threatening injuries. To get players back onto the pitch after they have gone through a significant time out is one of the reasons why you do it. Last season Julian (Sarmiento-Ramirez) had been out with a quad injury and to get him back in time to score an important goal in the cup meant a lot. We got him back a week before that game and it was great for him to score. You want players to be out there enjoying their football and for him to score the winner was great for those that helped him back to fitness. You want to help young players to carve out a career for themselves.

“I have been at the academy a long time now and we have a saying, ‘better people, make better Dons’. We try to develop them as people as well as footballers. We all know that the chances of making it as a footballer are far from guaranteed and we want to give them the life skills to be successful in whatever they do in life. That’s something I’m really proud of. It makes me happy and proud to be a part of Wimbledon and what we do. For example, there are people who have gone onto get a good job in sales, or other careers, that they may not have got without joining us.” 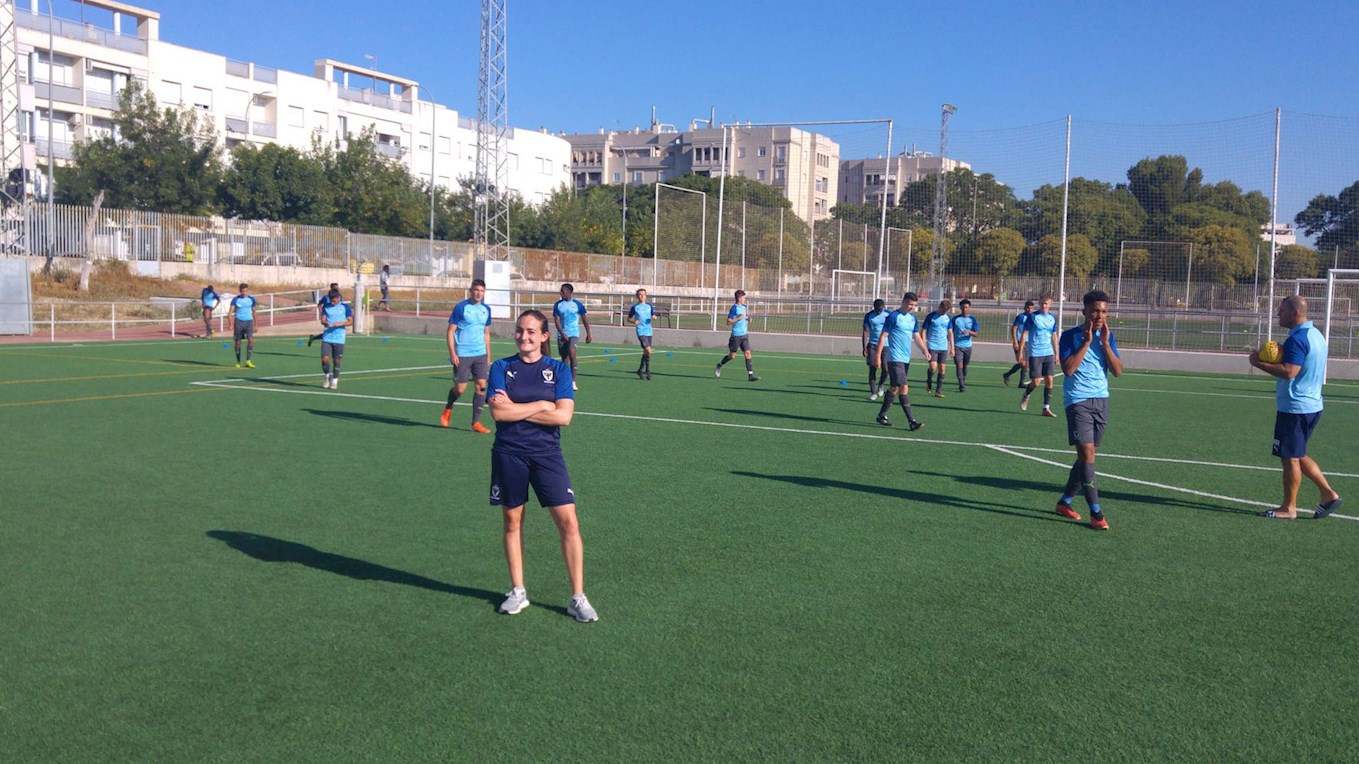 How many students from St Mary’s have been with Wimbledon in the last year?

“At St Mary’s they do a Sports Rehabilitation degree and their students come to us for a period of time. We normally have eight every season, but they are with us at different times. We’ve been doing it for about three years now. Some of the staff have come through placements, joining us after they have finished their degrees. Hope Anderson, Tayla Porter and Ben Austin-Blows are the previous St Mary’s students who have come on board as medical team staff after joining us for placements. We’ve also had students from other universities complete work experience with us and then go on to work for us afterwards – Conor Ohara-Barrett and Louise Tasker.”

What’s the approach in terms of getting them involved with what you do?

“One of the reasons they like coming to Wimbledon is because it’s really hands-on. The tasks they do on a daily basis are varied, based on how busy we are. If it’s relatively quiet I will get them to assess one of the injured players and I watch that taking place. I offer them feedback afterwards, including corrections, and then we discuss the injury and the best course of action. Some days if we are busy, or if we have a serious injury, I will assess the player, but the student will have an opportunity to get involved in the treatments that include massage, mobilisations, and ultra-sound. They get to practice their assessment skills for a player’s injury and monitor the rehabilitation.”

How important is it to have good links with a local university, especially as we pride ourselves on being a community club?

“It’s very important. In our environment we encourage development for players and staff, so for us to provide an environment that helps potential physios to develop and improve is important. With any kind of partnership, it works both ways. We’ve had a lot of St Mary’s students joining our other departments. For example, our Sports Science department often has students coming in, and it’s the same with our Video Analysis department. We’ve got good links with the university and we’ve been invited to events. There may be times when we need to use their facilities, for example an indoor hall for training. I think a club having good links with a local university is really important.

“We were nominated for the top-five. We had an awards night on 7 May, which was a bit different as it took place on Zoom! A school won the award for its teaching placement. It’s nice to be nominated and it’s a great opportunity to show how good the academy environment is that we provide for students. There’s a recognition that we have a good medical department. There is me and the Under-23s physio, and around eight part-time staff, so there are about 10 of us. Most of the students come in full-time, so they do a bit with Dougy as well to get a look at the academy players all the way through. It shows there’s a high knowledge level for students to come in and learn.” 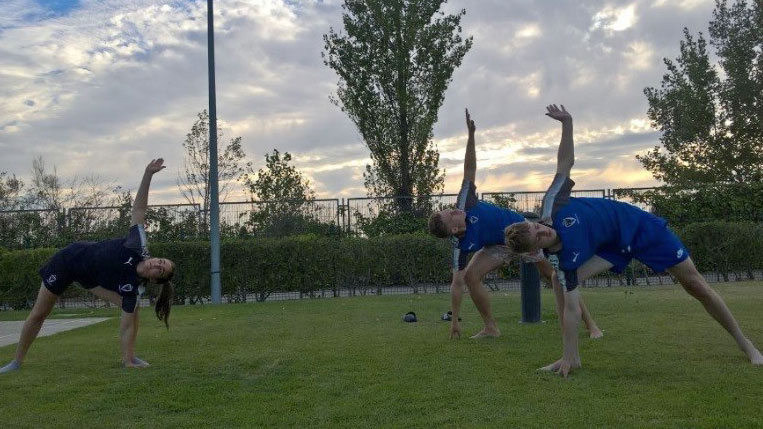 “It’s been a real change, normally it’s very full-on at the training ground. We’ve been doing remote rehab, so I have discussions with the players once a week and we plan their rehab. We will let them know their running drills end exercises. They get a weekly plan of what their days are going to be like, for example when they need to do running and strength exercises and which days are recovery days. Each player is different, but some will let me know each day how they have got on, other players may let me know at the end of the week. It has been a challenge because normally you are with the players every day. I have mainly been doing this through phone calls, but also video calls showing examples of rehab exercises. We had one player who got injured during lockdown, so I had to do an assessment of his injury. We also did a Pilates session with the squad using Zoom (before the players were furloughed).”

How does your background in gymnastics help with your job?

“I was an elite gymnast. I competed for England, but it was more like a B team. I was not at the very top level of being able to compete in the Olympics or World Championships, but I did represent England and Great Britain a couple of times in friendly internationals and the world university games. I was English Beam Champion one year.

“Gymnastics is a very tough sport, both physically and mentally. I brought with me an understanding of what it’s like to be an athlete. Gymnastics is a traumatic sport and I had injuries. Once I found a physio that understood sport, it made such a difference to my recovery, to have someone who understood that it wasn’t just a case of taking time off. You can still work around injuries, for example if your elbow is in a cast, but you can still do other stuff to keep the fitness up. I know what it’s like to sit on the sidelines watching sport and thinking that I should be out there. I wanted to help people in that position, to give them the best chance of achieving their dreams.”