Ollie Ryan Tucker is studying for a Masters degree, but he has certainly shown his versatility away from the classroom by putting in plenty of hours for the Dons Local Action Group.

The 23-year-old, who is a student at King’s College, recently received a glowing reference of his work with a message from one of his fellow volunteers stating ‘the legend does every DLAG volunteering job going (including mopping the floors)’. His commitment to the cause was also highlighted with an image on social media of Ollie advertising for food donations in the pouring rain! Earlier this year, he was a volunteer for the Plough Lane Bond, which included handed out leaflets at Morden train station. It was a task that Ollie said became easier when fellow volunteer Cormac van der Hoeven helped to stop busy commuters!

We talked to Ollie about his eventful and varying experiences with the Dons Local Action Group, which includes helping to get the homeless off the streets, and helping out those isolated indoors by taking their dogs for walks.

The full Q&A with Ollie is below.

A key part of your volunteer role has involved spreading the word about the Dons Local Action Group on social media. Is this something you are trained in?

“Not really. I got involved in the group chat for the Dons Local Action Group very early on and Xavier asked if anyone used Twitter a lot. I said ‘yes’ and I was thankful to be given the responsibility to do it. At times, it has been a bit of a learning curve for me. I’ve been doing the Twitter and a few others have been doing Instagram and Facebook. It’s been nice for me to see everything that goes on. Whenever anything positive happens, people send me a message and ask me to put content up. I get to see the photos showing the happiness that the project is bringing to people in the community and the good news first-hand. It’s very uplifting for me, especially at this difficult time.

“I’ve also been involved in the newsletter and we released out first edition on Sunday. I thought it looked really good in the end. We managed to find a designer, who we sent the content to, and he came up with it. We are going to try and do it every week from now on, just to make people aware of all the different stuff that we are doing. I wrote a lot of the content and sourced pictures for it.”

What other jobs have you been doing?

“I have also been doing shifts at the Old Ruts hub and the stall outside Sainsbury’s in Wimbledon, which is one that I run. A few weeks back we started our homeless outreach policy. Quite often we were getting homeless people coming up to our stalls and asking for help. We gave them stuff here and there, but we didn’t really have a tailored approach set out. A few of us got together and at first we just went around talking to homeless people, bringing them stuff, and asking them what they needed. Following this, we managed to get a few people into council housing. I’ve ended up doing a few random tasks that I certainly didn’t expect to be doing a few months ago! For example, I’ve been making calls to get people’s universal credit sorted.

“Yesterday, we had an example of things turning full circle. Nathan and Andrej, two people that we helped get housing, contacted us and asked if they could get involved. We had put them in touch with the right department at the council and now they are staying somewhere in Streatham. We are taking a few boxes to them every week. They wanted to pay us back for what we had done and it was a nice touch from them. Nathan gave me a call and said that he wanted to give something back for the help we had provided. I thought it would be a good idea and he has a Wimbledon shirt now! He wasn’t a Wimbledon fan, but now we are converting him! He is going to do one shift for the Dons Local Action Group every week now. Our main role now is to make sure they stay in their new homes: making sure they have food and providing help with any issues they may have, for example in getting universal credit.”

The picture below shows Nathan and Andrej helping out yesterday at a Dons Local Action Group stall. 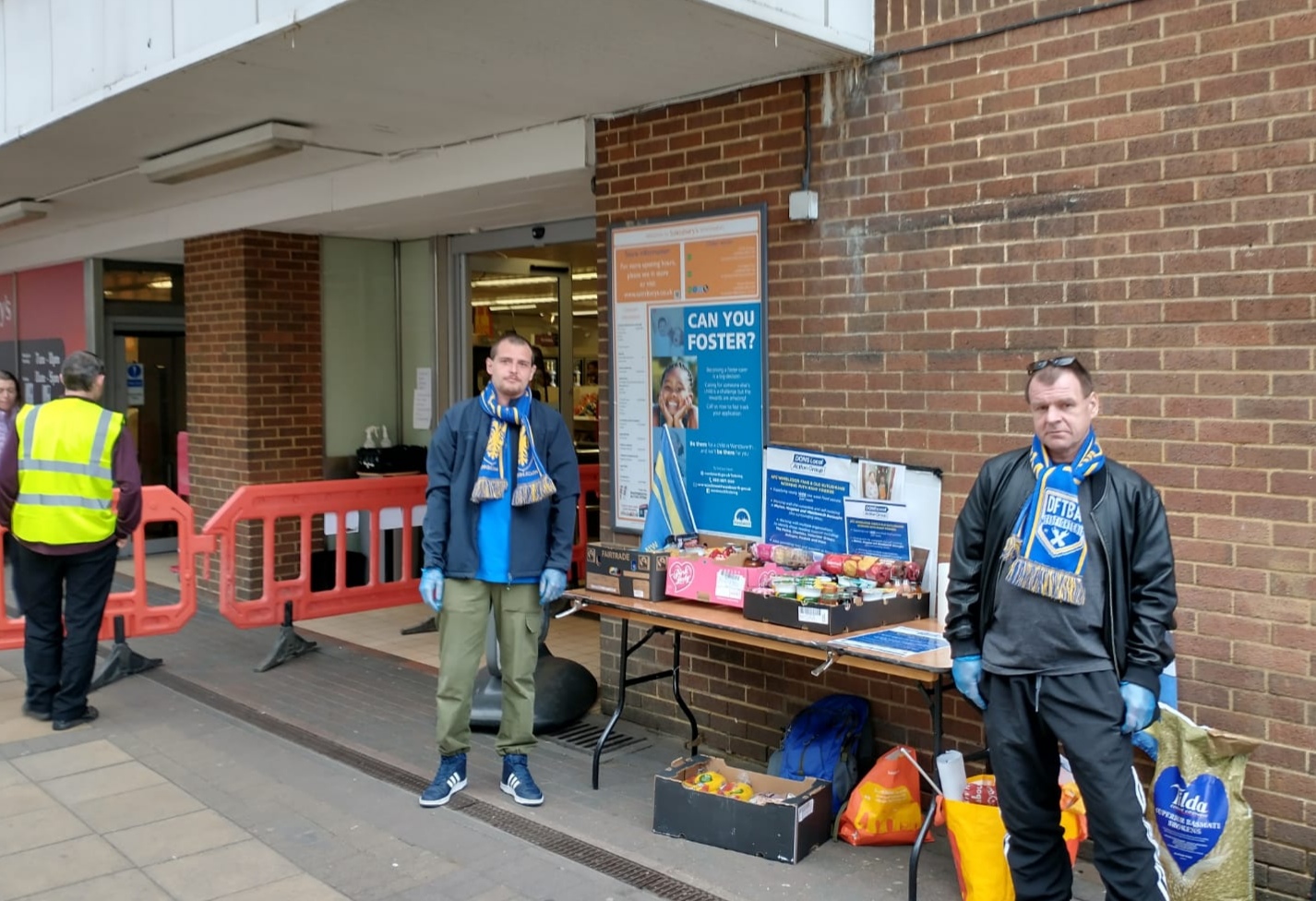 Does it give you a lot of satisfaction that you are helping people in such a way?

“Before I got involved with the Dons Local Action Group I found the current situation quite dispiriting. It was frustrating to be sitting at home all day, not being able to go out, and hearing all of the depressing news. Being involved in something like this makes you feel that there’s some kind of positivity in the world and you are a part of it.

“One other thing we’ve been doing is helping people in the community to celebrate their birthdays. As well as dropping off food boxes, we’ve been going around with some cake or flowers. One of the volunteers called Beth plays the Accordion, so she has been playing the happy birthday tune to elderly people who are in isolation. We want to make them feel that they are not alone at this difficult time.” 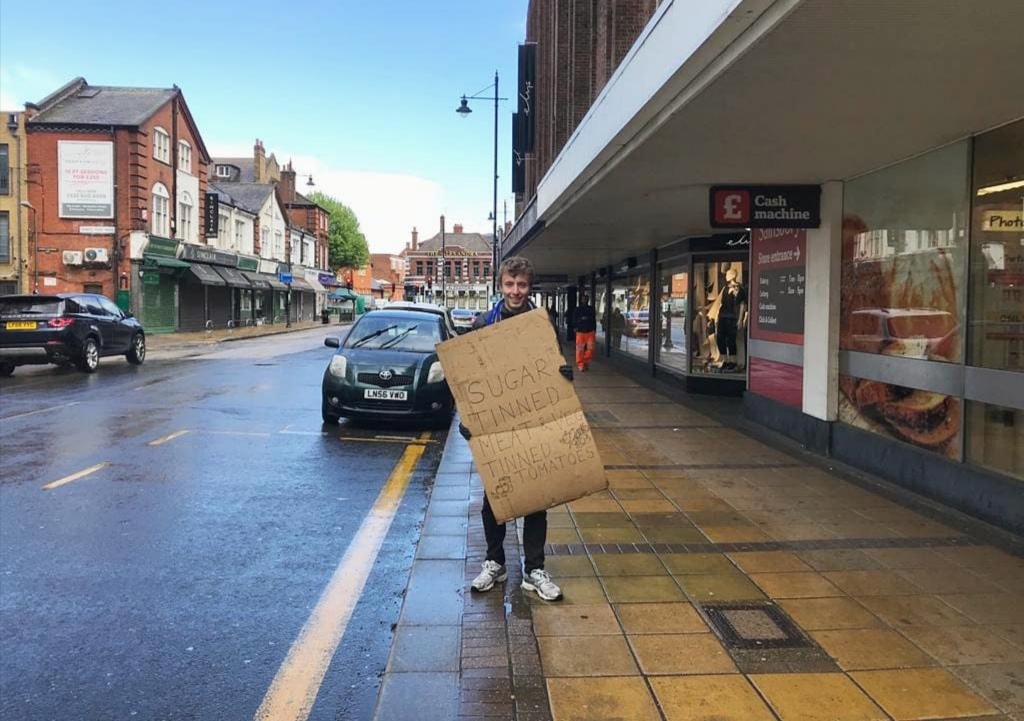 How has this filled a gap in your own life?

“I am 23 years of age and doing a Masters degree in Conflict and Security at King’s College, London. I still have a dissertation to get on with and that has to be completed by August. It has to be 15,000 words in total, so I will need to get onto that fairly soon!

Are you a Wimbledon supporter?

“Yes, since I was 13. My first game was against Bradford when Jack Midson scored twice. It will be particularly nice for us all to go back home to Plough Lane on the back of this and the community work we are doing at the moment. It will be a good way to announce that the football club are back in Wimbledon.”

People of all ages have been helping out with this project, so how much does this highlight the real community spirit that has developed?

“It says a lot about the football club and its supporters. We have football fans who want to volunteer and get involved in something that helps their community. The best thing for me to see though is all those people who are not football fans – people who previously had no engagement with AFC Wimbledon as a club – getting involved. We have become the organisation that gets things done to help the community.” 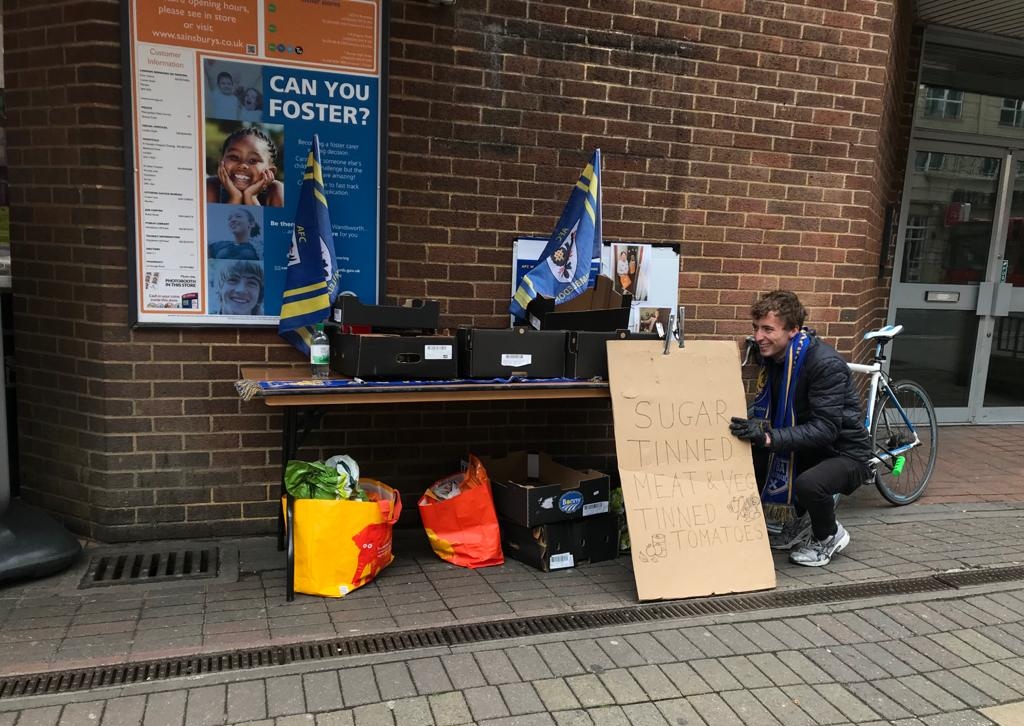 How did you get involved with the Dons Local Action Group?

“I was in the What’s App group for the Plough Lane Bond. I went down to Morden station a few times and gave out leaflets there. You get people who ignore you and at first I started off being a bit too quiet and polite! Then Cormac turned up and we managed to get a bit more interest going!”

What are the key challenges?

“I would say that the hardest part is trying to help the homeless and rough sleepers. There’s always something else that we can help with. It’s never just ‘here’s a food box’, and that’s the end of it. You have to be prepared for anything, but nothing feels insurmountable. It always feels like we can get things done by working as a team to help people.”

Do you think the Coronavirus crisis has put life into perspective and we will appreciate things more when this is over?

“Definitely, I am going to appreciate that first drink back in a park! I do think that what we’ve done has to continue in some way. We’ve shown how much that Wimbledon as a club can do for the community. The help we provide could just include regular visits to those in the community that need company, just to check that they are okay. A lot of the people we’ve helped out recently will still need support when the Coronavirus crisis is over.” 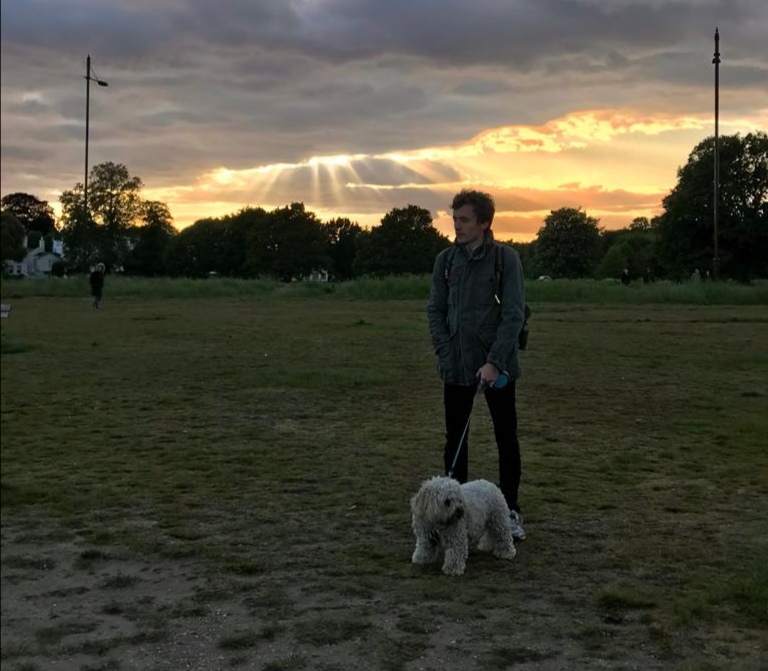