Steven Gregory said that AFC Wimbledon was the best club he ever played for in his career and it made him so emotional to play a big part in our rise.

The midfielder, who had two spells with the Dons, was an integral part of the squad that secured promotion back to the league. Exactly nine years since the drama of our penalty shoot-out win versus Luton Town, you can watch an extensive interview with Steven, who also played for Wycombe Wanderers, Hayes & Yeading, AFC Bournemouth, and Gillingham.

On the dramatic win at Manchester and what it meant to play for Wimbledon, Steven said: “We had a long time to prepare for the final, 10 days to two weeks. I felt really excited, I wouldn’t say I felt nervous. I still think we were the underdogs. Even though we finished above Luton, they were definitely favourites to win the game, so we had the underdog mentality of feeling excited. There wasn’t too much fear in the dressing room at all. It was tense, but I really enjoyed playing in the game. It was a fantastic occasion and we had great support up there.

“I picked up a nasty knock after about 60-70 minutes and it hurt like hell, but I managed to get through the 90 minutes on adrenaline really. Once it went into extra-time and I had a five-minute break my injury properly seized up. I was absolutely gutted to come off, but the whole experience was unbelievable. I had full confidence in Lee Minshull after he replaced me and I was desperate for the boys to go and win it, which obviously happened in dramatic style, and it’s something I will never forget. It was the most emotional I've ever been in a football match."

“I say to everyone that AFC Wimbledon was the best club I played for by a country mile. Purely for the supporters and the people involved with the club and what it meant to them. When I first came in we had a history lesson, which included how the club was set-up, and what it meant to everyone. It made you want to buy into it and be successful. The fans would appreciate everything you did and even if you lost the game you would be in the bar with them afterwards. You really feel that love and togetherness with the supporters. The squad we had when we were in the Conference was young and hungry with no egos, which is unusual in football.”

A short clip of Steven's 24-minute interview is below and a link for the full interview is at the bottom of this page.

Steven also talked about an important time for the club before the glorious 2010/11 season started as Terry Brown led a switch towards full-time football, a change that really pushed the club forward.

“It was quite a big change in the squad from the first year to the second year,” recalled Steven. “In the first season of us being in the Conference National we were still part-time and training two nights a week. The squad mainly consisted of experienced players who had jobs and they had gone through lower leagues with the club. Terry Brown and the club decided to switch to full-time football to become much more of a professional outfit. Some of those older guys who were teachers, electricians, or plumbers moved away from AFC Wimbledon and Terry assembled this young and hungry squad of boys who wanted to play full-time. The club couldn’t afford to pay ridiculous money at that point, so they had a very clear recruitment strategy, which involved signing lads who were still living at home with their parents - they wanted to prove themselves in the game.

“I can remember coming in for pre-season and there were loads of new faces. There were only a handful of us that were left from the previous season. I just remember us having a really fit and hungry squad with some really talented boys in there as well. It was an exciting prospect and I think the expectation was to try and push for the play-offs, but because it was such a young team I don’t think that promotion was massively on the cards, right from the get-go. I think it was more about trying to build that squad for the following season and to push for promotion then, but we got off to a really strong start. We were unbeaten in seven or eight games and once that happened we realised that we may able to do better than we had thought.

“Crawley had run away with the league and we couldn’t catch them, but with four or five games to go we knew we were in the play-offs, so we started to prepare for those games. Everything was geared around what we were going to do in that first match against Fleetwood. We had quite a set formation, we had always played a diamond for the whole season. I was at the base of that diamond in holding midfield and various players were coming in and filling the slots. We just tried to focus on our mentality going into those play-offs. We were so ready for Fleetwood when that first game in the play-offs came around." 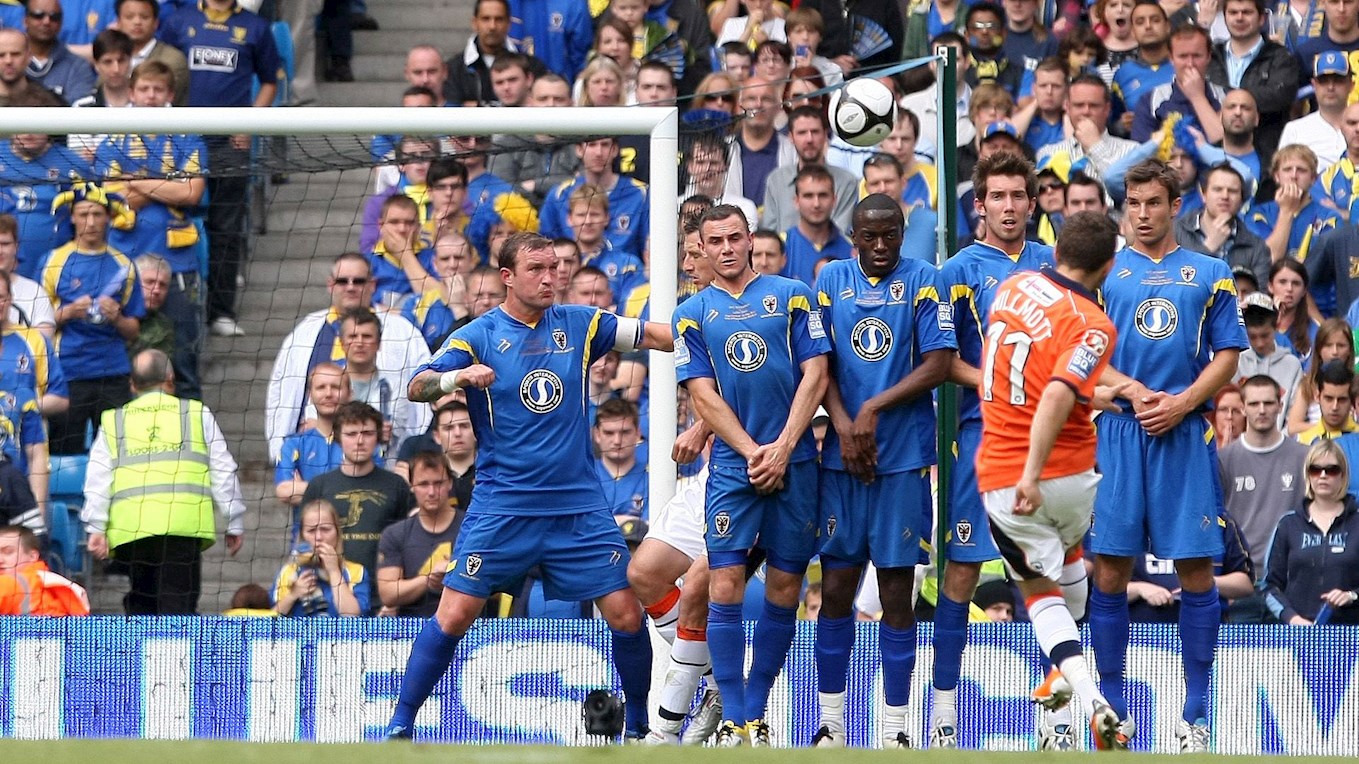 After deciding to retire from football at a relatively early age, Steven is now enjoying his second career as founder and owner of Fitlife Gym in Haddenham. Speaking about his decision to hang up his boots, Steven said: “I decided to stop playing at the age of 27. When I left Wimbledon to join Gillingham I kind of decided that it wasn’t what I wanted to do anymore. It sounds really strange to most people. It was a dream of mine to be a professional footballer, but certain things had happened to me within the game that made me fall out of love with it. Not with football itself, but definitely with the politics side of the industry.

“I started to write business plans for opening up a gym back home. When my contract came to an end at Gillingham I just decided to go for it. We started off with boot camps and now we have a gym of 600 members and 16 staff. It has gone really well. I love it. Fitness is something you have to do as a footballer, but for me it was always one of the things I enjoyed most.

"I was one of the only players who enjoyed pre-season! I enjoyed pushing myself, testing my fitness, and being in the gym. Jason Moriarty really got me into strength training back in my Wimbledon days. I’ve got him to thank for a lot of it. I always wanted to be in the gym, or out doing extra running. I loved the fitness side when I was a footballer, so I naturally decided to go into this for a career. We provide a more personal experience that just swiping in and getting on with it on your own. The enjoyment I get from other people fulfilling their fitness goals gives me great satisfaction. I am lucky to do what I do and I love it.

“I was never earning enough money to even take six months off at the end of my career, so you have to continue to work. Football is a short career and I decided to leave it earlier because I felt like I had got to a stage of being happy to draw a line under my football. I was happy with what I’d achieved. I didn’t want my football career to feel like I had to do it, or I’d lost the passion for it. I wanted to stop at a time when I could look back with fondness and good memories, rather than dreading to go to training. I am sure there are players out there continuing to chase those one or two year contracts because they need to do that. Those are the people who need to start thinking about life after football and I’m always here to help people to discover what they want to do.”

You can take a look at the full interview below.