Steve Seddon said it was a different kind of pressure for Wimbledon's squad as they geared up for that all-important finale at Bradford City.

With it being exactly one year since Wimbledon completed that memorable survival feat in West Yorkshire, we today feature the second part of our catching-up interview with Steve, who recalled a tense build-up to the game on 4 May 2019.

Steve is very grateful to AFC Wimbledon for providing him with a chance to enhance his career during a five-month spell last season. The Birmingham City left-back, who scored vital goals for us during the run-in, was on loan at Portsmouth before the season was postponed, but he said that he came close to rejoining Wimbledon last summer.

Take a look below at our Q&A with Steve:

Aaron Ramsdale mentioned in a recent interview about the tension surrounding the all-important game at Bradford, but what was the build-up like for you?

“It was tough because for the first time we were going into a game outside the relegation zone. We had gone from being the complete underdogs with nothing to lose to having everything to lose on the final day. It was nervy and it was a strange one going into it because you were not sure what Bradford would be like as they were already relegated. They gave it a good go, and gave us a few scares. It was an interesting build-up. It was the realisation that we were finally out of the relegation zone and it was a different kind of pressure for us.

“We hadn’t quite done it by beating Wycombe, but it felt like we had taken a big step towards safety, and we still had to get over the line. We had been celebrating that win, but then all of a sudden the Bradford game came around and we knew that it could all fall apart in that game if we lost and the other results went against us. At the end of the Wycombe game we were all really happy. The other results went our way that day and that was sort of surprising. That was the game when I got put through, but it got caught under my feet, and they went up the other end and scored. Thankfully, Pigs scored another one.”

Having worked so hard to stay up, sum-up how everyone felt after achieving the Great Escape.

“It was a unique feeling and it’s hard to describe now. For the staff and players, it was a big reward for all the hard work – we had only been beaten once in the last 12 games of the season. We managed to stay unbeaten for a long period after being bottom of the table until March. It was a great effort to pick up so many points during the run-in. It shows what a good team spirit we had as a group of players. I can’t really describe the feelings after Bradford, but it was very emotional. It was a great feeling to have stayed up against the odds."

What are the games that stand out?

“Definitely Luton and Bradford, but also the 2-0 loss at home to Burton. I think that game was a bit of a turning point. I think it was quite a poor performance. The boys had beaten West Ham with a big performance and then we went up to Sunderland and lost 1-0, but we should have got something out of that game. Then came the Burton match and it was a poor display, but we managed to kick on again after that. The Rochdale away game was also very memorable as well.”

What did it mean to you to play for a club with such a unique story?

“The club is special because of its history and the fans are really behind the team. They want to like a player and get behind him. You can sense a pessimistic attitude at other places with fans perhaps almost wanting players to fail.

“I lived in Wimbledon Village when I was on loan and I met quite a few fans when I was out and about. I can remember chatting to fans when I visited my local Chinese takeaway.

“Last summer I was close to coming back to Wimbledon. It was just the whole thing with Birmingham and what they felt was best. It ended up with me staying at Birmingham and I went onto start the first game of the season for them." 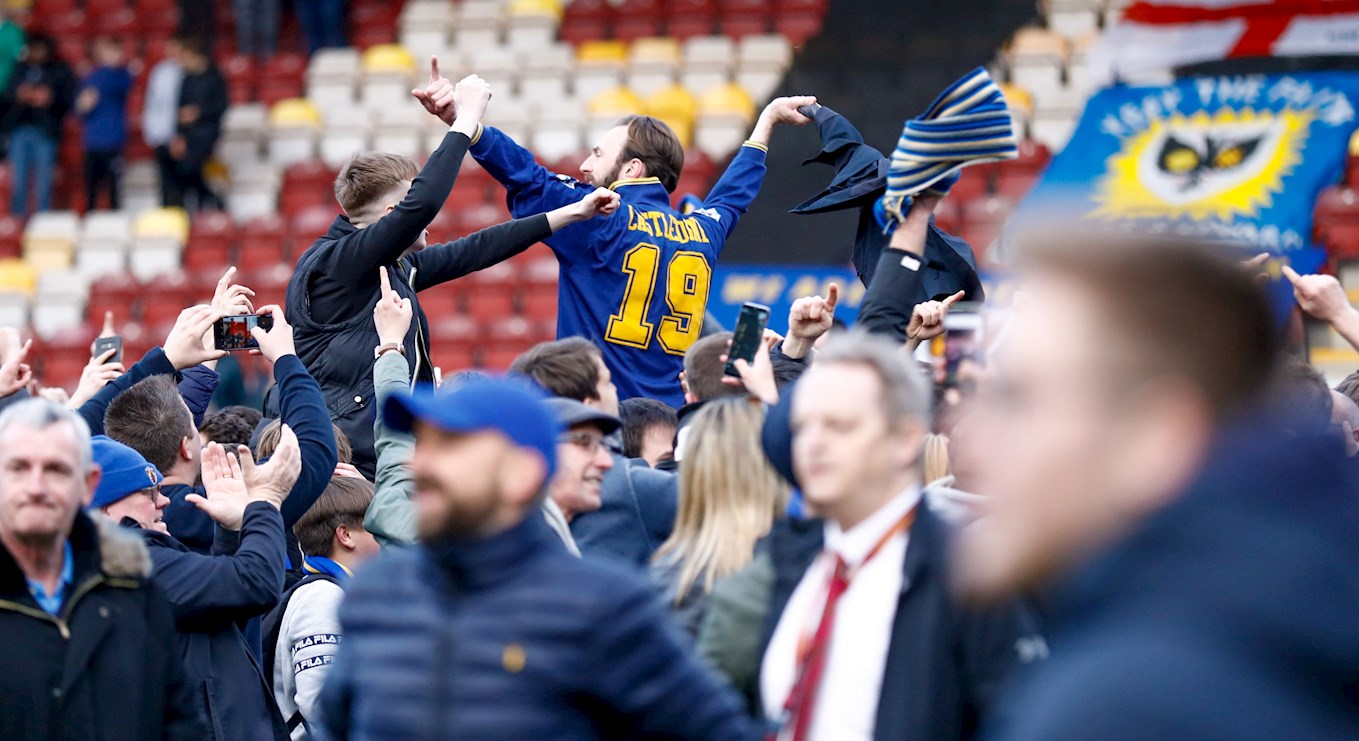 What was your favourite game?

“The 4-3 win at Rochdale. It was a topsy-turvy, end-to-end game. I remember being in the changing rooms after the game and the manager wasn’t happy with Terell. We were 3-2 up and we conceded again and the gaffer gave Terell a right rollicking. I think it’s one of the best I’ve ever heard in terms of a rollicking, especially as we had just won 4-3! That was a good moment that I remember from the changing rooms afterwards.”

What was your favourite Wimbledon goal?

“I would have to say Luton away because of the celebrations. When you watch it back you can see everyone celebrating on their own! Woody goes back into somewhere like row Z and Terell did a knee-slide that lasted about half an hour!”

Who was your funniest team-mate?

“I will go with Mitch, to be fair! The car school is Waggy, Mitch, Pigs, and Kwesi, and they are a lively group. They used to all arrive at the same time and the changing room would always get a bit louder after they came in.”

Who was the best player you played with at Wimbledon?

“There’s no doubt that it was Aaron Ramsdale. He was brilliant with Wimbledon and he's had a lot of Premier League appearances with Bournemouth at a young age. I think that says a lot about his goalkeeping qualities. There was a save against Luton that really stood out when he recovered well after the ball was deflected.”

How is it going now for you in your career?

“I was enjoying playing regular football at Portsmouth as it’s a massive club. It brings very different pressures. At Wimbledon, first and foremost you have to work hard, but 80 per cent of the time you are the underdog, especially against the bigger clubs in the division. To then go from being the underdog to a team that’s meant to take the game to the opposition and go out and win every match is a very different pressure. It’s good for me to get that side of it as well. Hopefully, we can get promotion after the season resumes.”

In case you missed it, take a look at the first part of our interview with Steve Seddon.