This time it will be done and dusted in one go.

On the two previous occasions when the Dons have drawn Crawley in the FA Cup, replays have been required. 51 years ago, in November 1969, it took three games to separate the sides. The then Southern League rivals drew the first game at Plough Lane before an extremely hostile record crowd of 3,300 at Town Mead watched the midweek replay also end scoreless despite extra time.

Afterwards manager Les Henley rejected the chance to toss a coin for the chance of a home replay and opted for a game at neutral Guildford instead. “I didn’t really fancy another game at their ground,” he said. “Even if we lose something at the gate I am hoping we can make it up in the first round.” After 4 hours and 38 minutes of football the deadlock was finally broken when Ian Cooke was fouled in the area and Eddie Bailham put the Dons ahead from the spot. The Irishman scored again before the close as Wimbledon emerged as 2-0 victors.

It was four decades before the club's crossed swords again in the world's oldest cup competition. The teams were Blue Square Premier division rivals when they met at the Broadfield stadium in October 2009 and it took an equaliser from Sam Hatton for the visitors to force a replay. That game turned out to be one of the best nights of the Dons’ 18 year tenure at Kingsmeadow and it all turned on a sending off.

Despite being on the back foot for most of the opening half, the Dons were level at 1-1 when full back Derek Duncan lunged at Crawley’s Simon Rusk and was promptly dismissed. Reorganising at the break, Terry Brown told the ten men to attack during the second period and they responded brilliantly with goals from Luke Moore and Danny Kedwell securing a famous 3-1 victory. The picture above shows Jon Main firing the Dons in front during the first half of the 2009 replay.

“For 30 minutes they battered us and then we lost Duncan,” manager Terry Brown said afterwards. “I was delighted with the response of the players. Every time I ask then to give me something extra they stand up and deliver.” The modern day Dons will be looking to extend their winning run to three when they face the Red Devils on Sunday.

Future Horsham boss John Maggs proved nearly unbeatable between the Crawley posts 51 years ago. The picture below shows Maggs saving from Gerry O’Rourke in the first game at Plough Lane. 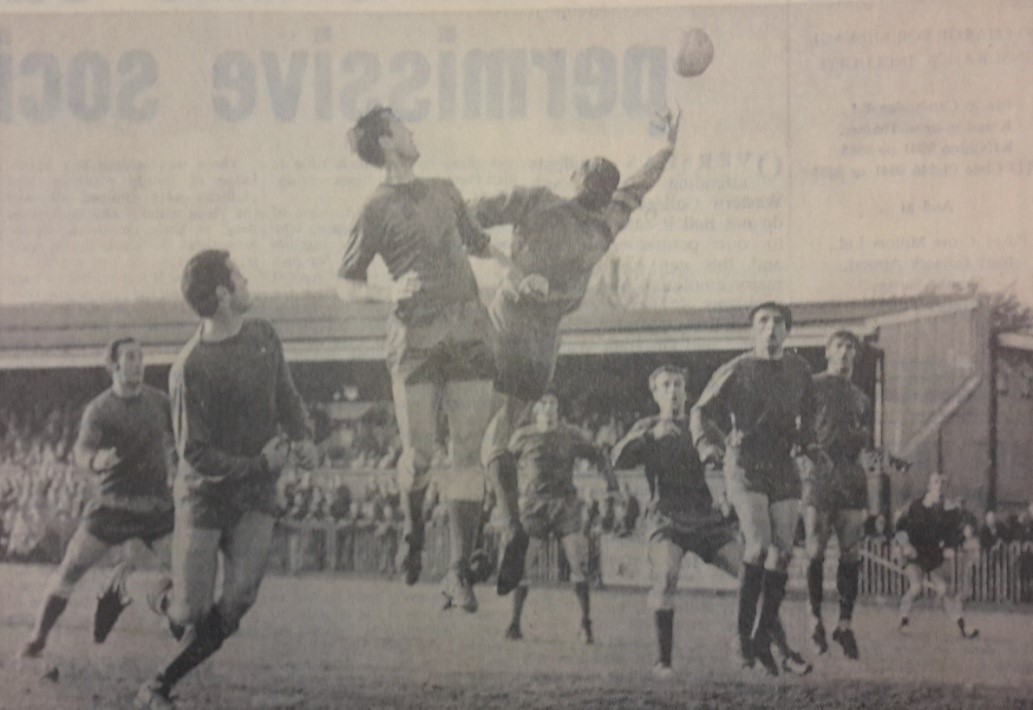