The picture above shows Scotland and Leeds’ Eddie Gray taking on Bob Stockley and Jeff Bryant at a packed Elland Road.

It was the ultimate David v Goliath clash – the Southern League Dons against the reigning league champions. After becoming the first post war non league side to win on a top flight ground by beating Burnley in the previous round, Wimbledon fans from far and wide travelled to watch goalkeeper Dickie Guy earn legendary status by saving Scottish international Peter Lorimer’s late penalty as the mighty Leeds United were held to a goalless draw in front of 46,230 amazed fans.

“I was 12 years old and on one of two special trains left Wimbledon station at around 7am in the morning and headed north via a circuitous route that took us through Trowbridge,” Stephen Crabtree recalls. “Much was made of the fact that our fans were not like the hooligans of the big clubs who wrecked ‘football specials’ and so we were allowed a hot meal as we journeyed to Yorkshire – steak and kidney pie and chips, served on paper plates with plastic cutlery to be precise.”

“Elland Road seemed enormous after Plough Lane but for the first hour the great Leeds side seemed content to pass the ball sideways. Then disaster struck when Dave Bassett hauled down Eddie Gray and the man said to have the most powerful shot in football stepped up to take a penalty. Having seen Guy save a spot kick against in a Southern League match against Merthyr Tydfil two seasons earlier I announced confidently; “He’ll save it!” and to my amazement he did.”

Holding a banner bearing the legend: ‘Wimbledon: Batsford’s Burnley Bashers’, the picture below shows travelling fans set upon by one of the Wombles at Elland Road! 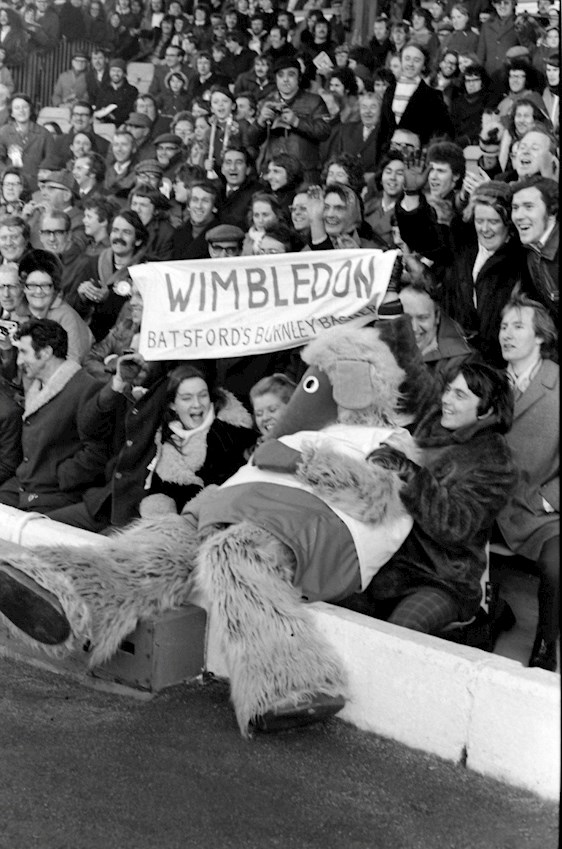