"He's one of our own" reverberated around Sixfields Stadium after Anthony Hartigan's last gasp goal clinched a place in the Carabao Cup third round.

A total of 302 travelling Dons celebrated after the final whistle with 21-year-old Hartigan and his team-mates after the midfielder's injury-time strike earned a 1-0 win at Northampton, avoiding the need for a penalty shoot-out.

Our home-grown talent, who has made well over 100 appearances for the club, let fly with a powerful drive that was too hot to handle for Cobblers keeper Jonny Maxted. That signalled a dash to the exits for home supporters as it was almost the last kick of the match, but Dons fans experienced completely the opposite emotions. This is the first time since the club's reformation that we've reached the third round of the Carabao Cup, and Wednesday night's draw could signal a Plough Lane date against one of the Premier League's leading lights.

Despite being pleased with the achievement of reaching the third round, Mark Robinson expressed his disappointment afterwards with the performance at Sixfields Stadium. The Dons were certainly second best after the break when Northampton threatened to win it, inspired by former Dons midfielder Mitch Pinnock.

Robbo decided to make wholesale changes from the side narrowly beaten at Sunderland on Saturday with only three players retaining their places. One of those was Ben Heneghan and he captained the Dons with Will Nightingale on the bench. In opposition for a side relegated from League One last season were a couple of former Dons with Dylan Connolly starting and Pinnock on the bench. Both matches between the sides were close last season with a 2-2 draw at Sixfields Stadium followed up by a dramatic 1-0 win for us when Nik Tzanev saved a penalty late on.

Though the hosts started on the front foot with a vocal home support getting behind them, the first real chance was created by Wimbledon. Aaron Pressley and Paul Osew combined well down the right to set-up Dapo Mebude, who struck his shot well, but Northampton keeper Jonny Maxted reacted quickly to save. At the other end, Northampton had offered only minimal threat in the first half hour, mainly from crosses that Tzanev showed good composure to claim.

Wimbledon established plenty of first-half possession with Anthony Hartigan and George Marsh getting on the ball in the centre of the park, but it was a different matter breaking the hosts down. A fine through ball by Ben Heneghan sent Aaron Pressley racing clear in behind, but there was not enough support, and Northampton got bodies back to snuff out the danger. Wimbledon came close to breaking the deadlock in the 39th minute when Paul Osew showed a fine turn of foot to create space down the right and his cross fell for Hartigan, who struck a shot that flashed just wide.

The first-half ended with the Dons on top and fashioning a chance to take the lead when Hartigan sent over a lovely cross from the right that picked out Jack Rudoni, but he was unable to get enough contact on his header and it drifted wide. Mebude, who showed flashes of his trademark trickery and pace, dashed down the left and sent over a cross, but no one was able to get on the end of it.  There had been little doubt that Wimbledon were the better side in the first-half, without putting the hosts under sustained pressure.

Paul Osew, who had been a real livewire on the right flank, almost made the difference seven minutes into the second-half. The pacy full-back received a pass from Mebude before cutting inside and delivering a cross that took a wicked deflection to leave Maxted scrambling to save, but it spun just off target. At the other end, Connolly was put clean through, but Tzanev saved, and then the flag went up for offside. With just over an hour gone, Mark Robinson made his first change with Henry Lawrence introduced for Nesta Guinness-Walker, and that meant Dan Csoka switched to left-back.

The change turned out to be very important as Lawrence stopped Northampton from taking the lead. After a shot by Danny Rose was saved by Tzanev, Kion Etete followed up and a goal seemed inevitable, but Lawrence was in the right place to clear off the line. The hosts built on that by having their best spell of the match and Heneghan was required to show all of his experience to deal with a dangerous cross into the box. Having watched Northampton threaten to take the lead, Mark Robinson decided it was time for changes and Ollie Palmer and Luke McCormick were sent on for Pressley and Mabude.

As we edged towards penalties there was an anxious moment for Wimbledon when Marsh sent a pass across the face of the box and almost opened the door for Northampton, but Dan Csoka showed good defensive qualities to get in a vital interception. The introduction of Pinnock had given Northampton more creativity as they threatened to break the deadlock and the Dons held on under sustained pressure for the first time. However, there was an unlikely twist in the tale deep into injury-time. The ball sat up nicely for Hartigan, who struck a cracking drive that had too much power for the keeper to stop it. What a way to clinch a place in the third round of the Carabao Cup - and it will mean even more if the Dons are paired with one of the big boys in Wednesday's draw. 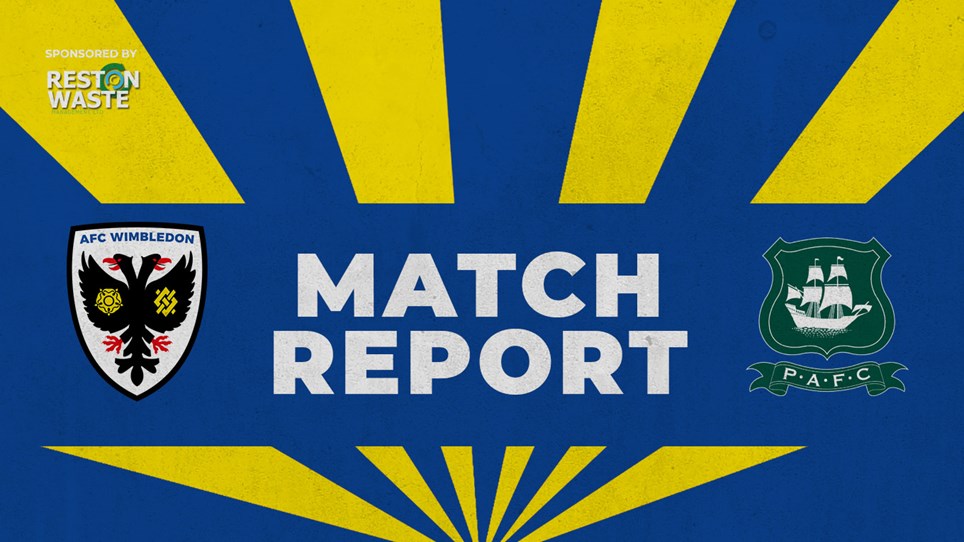 
The cutting edge that Wimbledon had shown in abundance this season was lacking today, as Plymouth came away from Plough Lane with a slender victory. 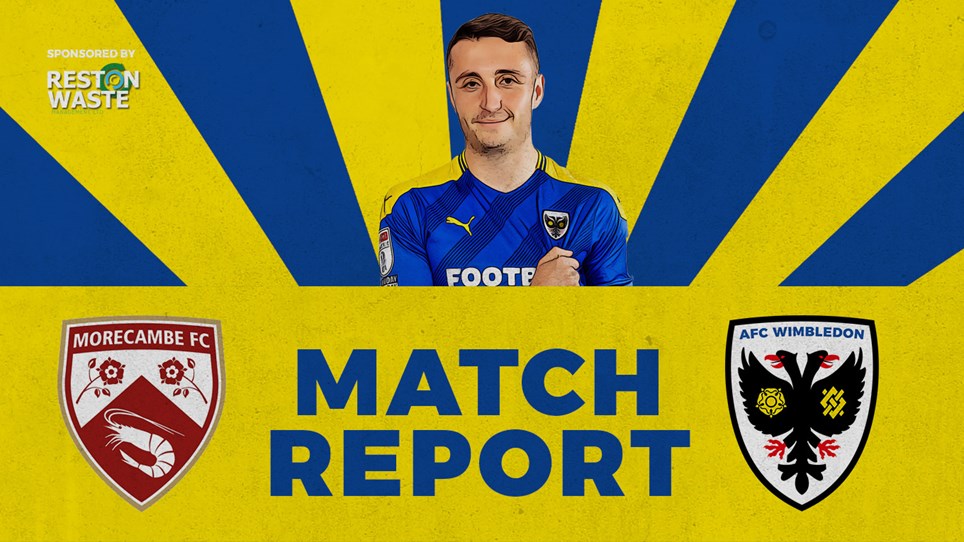 Dons march up the table after Assal’s last-gasp stunner


AFC Wimbledon moved up to fourth place in League One after winning a pulsating match at Morecambe today. 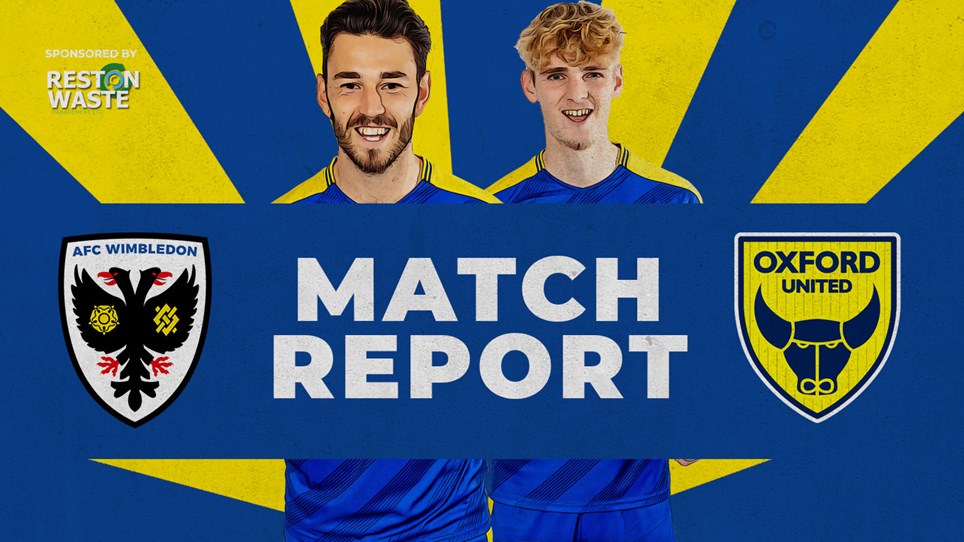 
Home-grown pair Will Nightingale and Jack Rudoni inspired a power-packed Wimbledon fightback that swept Oxford aside on a day to remember at Plough Lane. 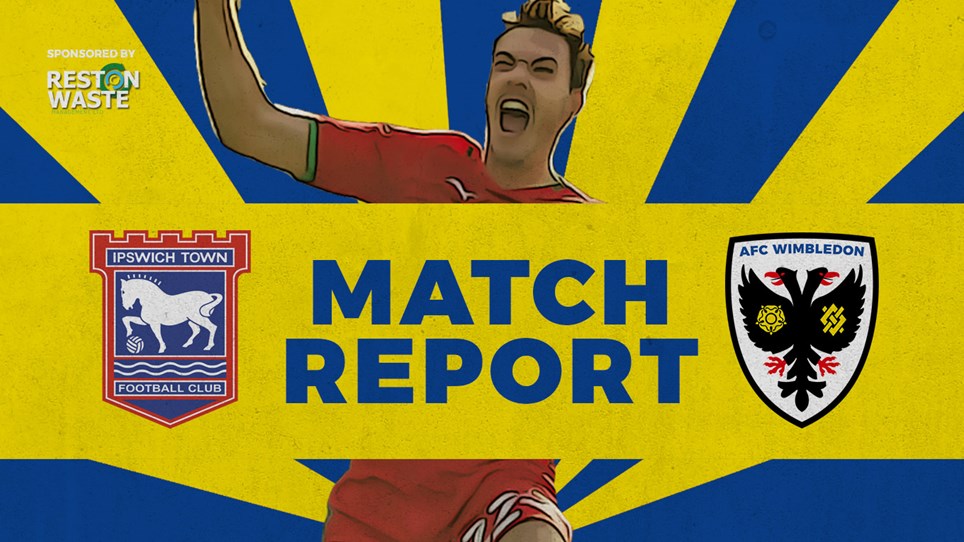 Dramatic goal salvages a point in front of 19,000 crowd


For the second time in a week, a goal in stoppage time proved to be crucial for Wimbledon as the fighting spirit shown by Mark Robinson’s men once again paid dividends.