Hector Pardoe has already upset the odds just by making it to Tokyo for the Olympics, but the Wimbledon story is inspiring him in pursuit of earning a medal.

At the age of just 20, Dons supporter Hector is one of the youngest participants competing in the 10km open water Olympic event as more experienced swimmers traditionally dominate due to the tactical nature of the sport.

On Wednesday night, Hector will be going for glory and ahead of the event we caught up with him for a chat all about his love for the Dons and his rise to the top.

Below is the full Q&A with Hector.

Q - With Wimbledon being a long way from where you were brought up in Wrexham, how did you end up supporting the Dons?

A - My Dad has always been a Dons fan. He took me to a game when I was nine years of age – the play-off final versus Luton Town in Manchester. Since then I’ve been a Don. The comical ‘Super Dons’ fan chant and  ‘We drink Champagne’ also amused the young me.

Q - As you have such a busy time with swimming, how do you manage to keep in touch with events at AFC Wimbledon?

A – Unfortunately, because I live in the South of France (Montpellier) I can’t go and watch games, but my 30-plus hours of training a week doesn’t stop me from following the games on the Dons website and BBC Sport. My brother and Dad are also season ticket holders, so it’s always the topic of conversation when I call home.

Q - Do you wear any Wimbledon colours during training?

A - I have a Dons home shirt that I’ve been wearing often in my gym sessions, which draws attention from my coaches and some of the swimmers. My Coach Phillipe Lucas has said he used to play Football Manager and so he likes the logo on the shirt. My assistant coach now follows our progress and I’m trying to get more French supporters! 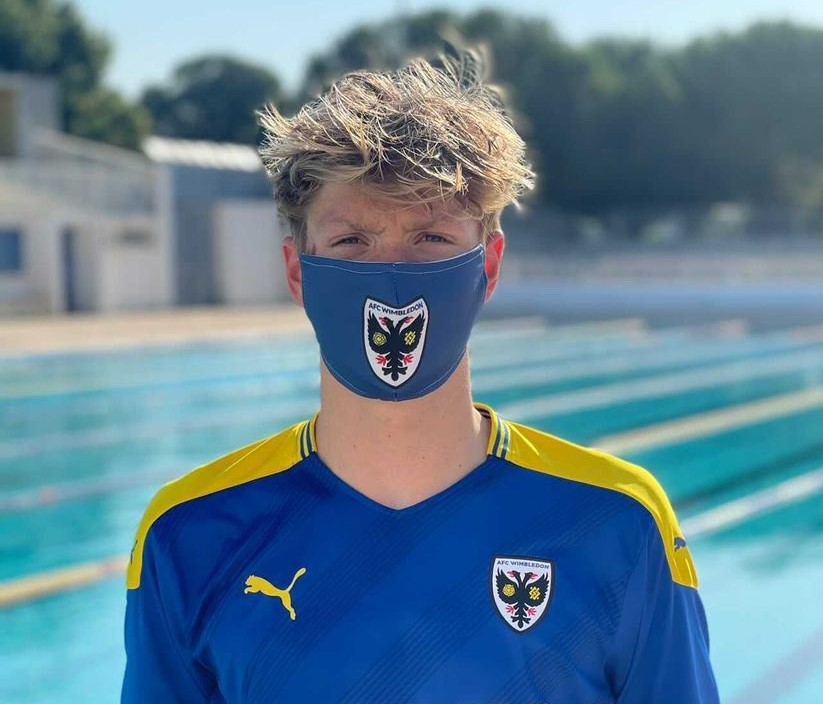 Q - Who was your favourite Wimbledon player in the past?

A - My favourite past Wimbledon player is Jack Midson because he was so crucial to us avoiding relegation. I also liked singing ‘that boy Jack Midson’ whenever he scored. I also liked Aaron Ramsdale for how much passion he showed for the Dons when we avoided relegation in 2018/2019 season.

Q - What are your favourite Wimbledon memories/matches?

A - My most memorable Wimbledon matches that I’ve attended were either against Luton Town in the play-offs or against Walsall  away in 2018/19 when we won as part of our ‘Great Escape’ from relegation.

Q - Next season promises to be very special with our first campaign in front of crowds back at Plough Lane. Do you think you will find time to come down and watch a game?

A - I will be back in the UK in September after the Olympics. Hopefully I can go with my family to watch a game at Plough Lane. I’m excited to see the new stadium in person. It looks amazing. 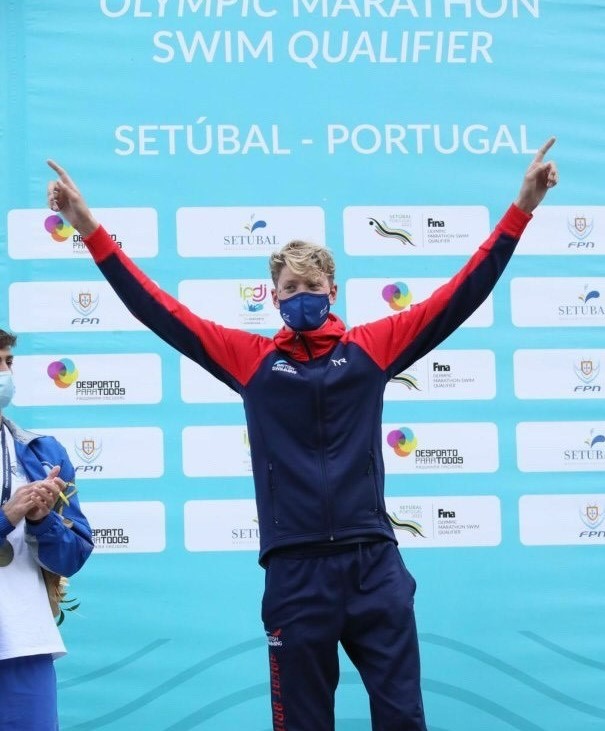 Q - You finished eighth at the European Championships and have now qualified for the Olympics. Has this been a breakthrough year for you?

A - This has been a massive breakthrough year for me. I always had my eyes on qualifying for the Olympics, but previously I was only really getting results on the Junior stage (Under-18). But since I came to France to train I’ve consistently placed in the top 10 at every World Cup and European Cup I’ve raced in, which is almost unheard of at my age. That’s because of the experience needed to really master marathon swimming due to it being such a tactical sport. I won the men’s Olympic qualifier in Portugal last month and I’m hoping I can continue this progression even further in Tokyo, despite being an underdog.

Q - How many kilometres do you swim on a daily/weekly basis?

A - I average 85-95km (25 hours) in the pool weekly plus 2 hours of gym per day. I have two weeks off in summer each year. But after the Olympics I will be taking a couple of months off swimming!

Q - How did you get started as a swimmer and at what age? What clubs did you start with?

A - I started swimming when I was six because my brother was doing it competitively and my dad had instilled competitive values into us. I was always striving to be faster than him, but he is three years older that me, which meant I was always trying to improve to catch him up. This resulted in me being a really competitive swimmer at a young age and I developed a passion for it. My first club was Whitchurch Wasps but I was only their briefly as I then moved to Ellesmere College to pursue my studies at the same time. 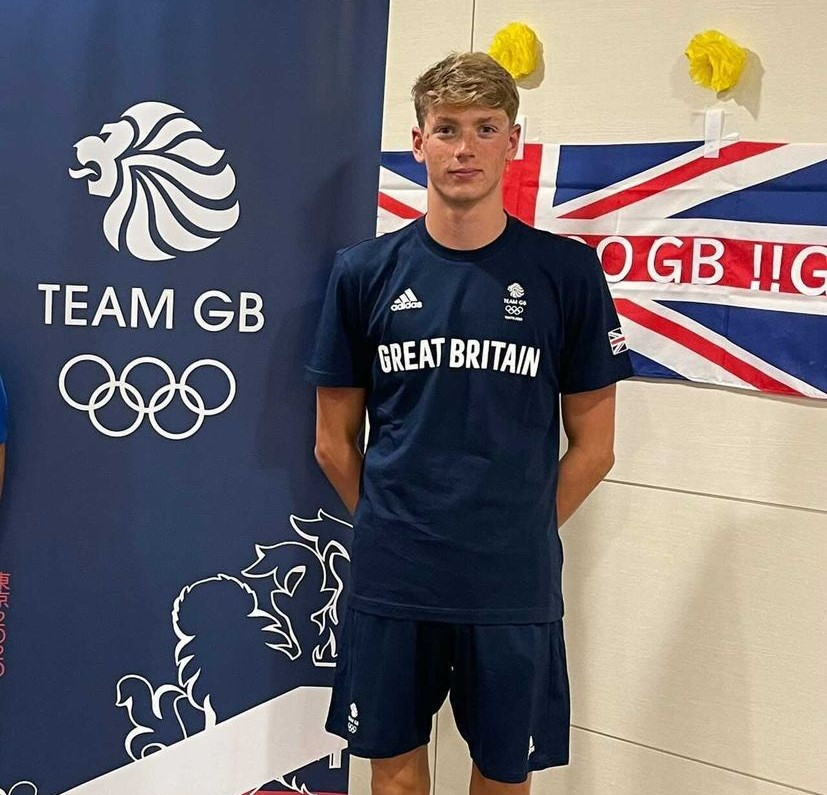 Q - Was it always swimming for you or did you pursue other sporting opportunities too?

A - It was always swimming. I played football and other sports at school, but I was one of the top age group swimmers in the UK when I was 9 and 10, so I never really had any interest in pursuing other sports seriously. Although I’d love to have played for Wimbledon of course!

Q - Are you a full-time swimmer or do you have another job to support you?

A - I’m a full time swimmer, so I support myself via sponsorships which can sometimes be quite difficult. 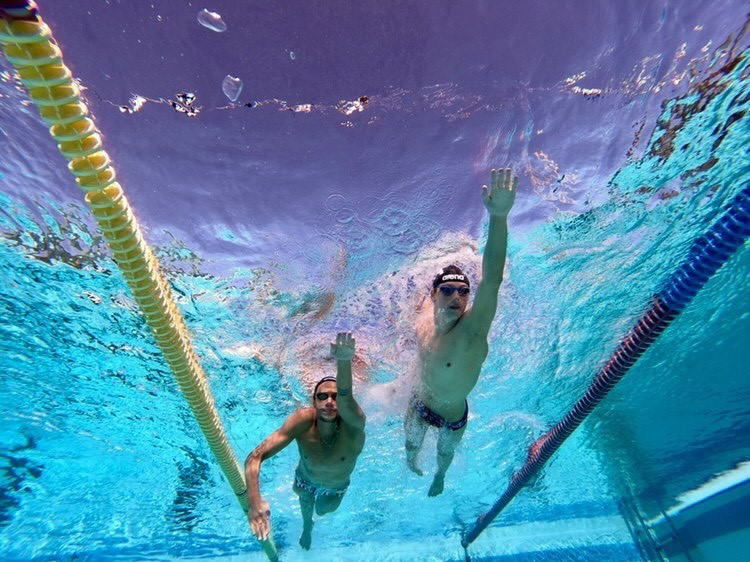 Q - When did you fly out to Tokyo and what was your schedule after you got there?

A - I flew out on the 21st of July. My schedule is the same as it is in France, just the timings of when I swim is different, so that I can adjust to the time zone. Morning sessions were brought forward 30 minutes every four days, due to my race being at 6.30 am Japanese time, meaning I will have to wake up at 3.00am! My race is on 5th August local time.

Q - How excited are you by the challenge and what is your target in the competition?

A - My target for Tokyo is to show why I do all this training and of course to try and get a medal. Even if the chances are slim, that’s always the ambition!

Q - Wimbledon’s story is all about battling to defy the odds. As a marathon swimmer can you identify with the story and does it inspire you?

A - Wimbledon being an underdog is certainly a story I can identify with in swimming. When I was a teenager I was quite small compared to some of my competitors physically, meaning it was hard to compete. It's a big problem in swimming as people get disheartened by a lack of progression and so a lot of people quit the sport early. I kept going and once I finally caught up with other boys physically, I excelled again. So Wimbledon's story is definitely relatable.

Q - Our Dons Local Action Group have led the way since the Coronavirus crisis started in terms of helping the community. Does this make you proud to be a Wimbledon fan?

A – Yes, it’s great to hear that Dons fans can come together to help the community as well coming together to support the club. When I visit my next game, I’d love to see the great work being done by DLAG for the community.

I felt the love of the fans in January. When I was coming back to France on the Eurostar and I posted a photo in my Dons mask I received loads of messages wishing me good luck with my training. I really do appreciate all the support for fellow fans, it means a lot to me and shows why this is such a great club.

Hector races at around 10.30pm BST on Wednesday, August 4, and all at AFC Wimbledon wish him all the best. We’re already so proud of you - and it will be great to see you at Plough Lane soon!