AFC Wimbledon’s year came to a disappointing end on a night to forget at the Kassam Stadium.

All the scintillating form we saw at Wycombe seemed a distant memory as Oxford struck three times to seal a convincing and deserved win. For the 780 travelling Dons, it was yet more pain at a venue that has been a simply horrible place for us to visit. One win and two draws from 11 league visits since we returned to the Football League is evidence of that.

Our recent match postponements arguably knocked the momentum out of the team, who looked lacklustre and off the pace, particularly in a first-half when Oxford were rampant.

Things picked up in the second-half when Robbo shuffled the pack and our trademark fighting qualities finally emerged. But the damage had been done by then and we were left with a mountain to climb that was simply too steep.

Goals from Mark Sykes, Matty Taylor and Sam Long earned a 3-0 victory as it turned into a routine home win for the hosts, who were rarely troubled by the young Dons.

Mark Robinson made two changes to the side which dramatically drew away at Wycombe Wanderers 18 days ago with Dan Csoka and Egli Kaja – who made his first start for the Dons since May 2018 - coming in for Henry Lawrence and Ayoub Assal respectively. Meanwhile, our former full-back Steve Seddon featured in Oxford’s starting eleven.

It was the hosts who were afforded the first opening of the half as Ryan Williams drifted a dangerous cross towards the back stick, but Gavin Whyte failed to connect with the ball when it appeared easier to score. A nervy start for the Dons maybe, but it didn’t take us long to get settled as Alex Woodyard and Anthony Hartigan began to establish possession in the centre of the park, cheered on by a vocal away following.

Deployed as part of a fluid front four, Ollie Palmer often dropped into the number 10 position with Luke McCormick largely tasked with pressing high in order to counteract Oxford’s desire to play out from the back. However, the hosts, who were driven on by a noisy home crowd, were quick to threaten once more. Matty Taylor was allowed the room to force Nik Tzanev into a good save before the danger was repelled.

Oxford were beginning to sense blood with Cameron Brannagan this time taking it upon himself to strike an effort from distance that had the Wimbledon shot-stopper worried once more, but the ball flashed just wide of his right-hand post. A let-off for the Dons, who were left sweating again barely a minute later as Csoka was this time dispossessed, before Tzanev came to his rescue to defy another home attack.

Wimbledon were made to pay for sloppiness in possession and a lack of organisation in transition when the hosts made the breakthrough in the 27th minute. Caught cold by a quick cut-back, Mark Sykes applied the finish that a brisk Oxford counter-attack deserved. It was a harsh lesson for Wimbledon who were really struggling to gain a foothold in the game against one of the division’s promotion contenders. And the Dons were once again left in a daze as the hosts doubled their advantage. Whyte drove down the right-hand side before drilling a low cross into the path of Taylor, who couldn’t miss from barely a yard out.

It threatened to get worse, but Ben Heneghan made a last-ditch goal-line clearance as the U’s threatened to make it a trio of first half strikes before the whistle sounded for the break. The second-half presented our boys with a chance to fight back with a vengeance - and at least initially we looked like making a game of it. Kaja, understandably keen to grasp the opportunity provided to him by Robbo, did ever so well to carve out an opening on the far side as he flashed an inviting ball across the goalmouth that was begging for a Wimbledon touch, but that sadly never came.

Any hint of a second-half fightback was shortlived as the hosts effectively killed the game off on the hour. A half clearance by Jack Rudoni was quickly pounced upon and a ball into the box found the unmarked Sam Long for the simplest of finishes at the back post.

There was a minor positive for the visitors in the latter stages of the half as Zach Robinson made his return from injury in place of Palmer, thus marking his first involvement at senior level this term. Robinson threatened a consolation, but he was denied by Simon Eastwood near the end.

George Marsh and Dapo Mebude were also introduced in a late attempt to salvage at least some sort of consolation from the wreckage, but it was all in vain. The disappointment was there for all to see from those of a Wimbledon persuasion as the players and staff collectively trooped off after applauding our loyal supporters.

Admittedly, our young side were taught a harsh lesson, but it could turn out to be a strong character-building experience for the future as the young Dons seek to improve in the long run. 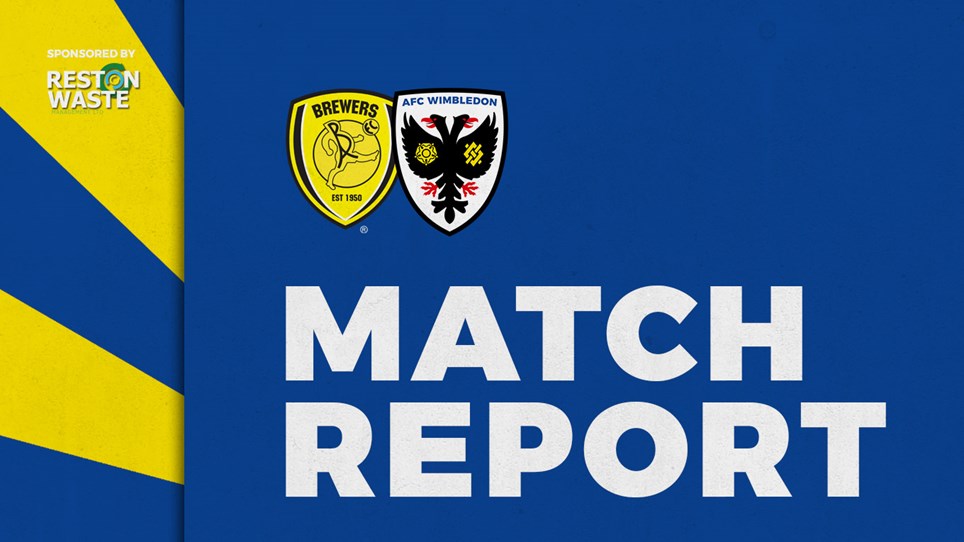 
A game that seesawed for much of the 90 minutes ultimately ended in a draw as Robbo’s boys fought valiantly to clinch all three points. 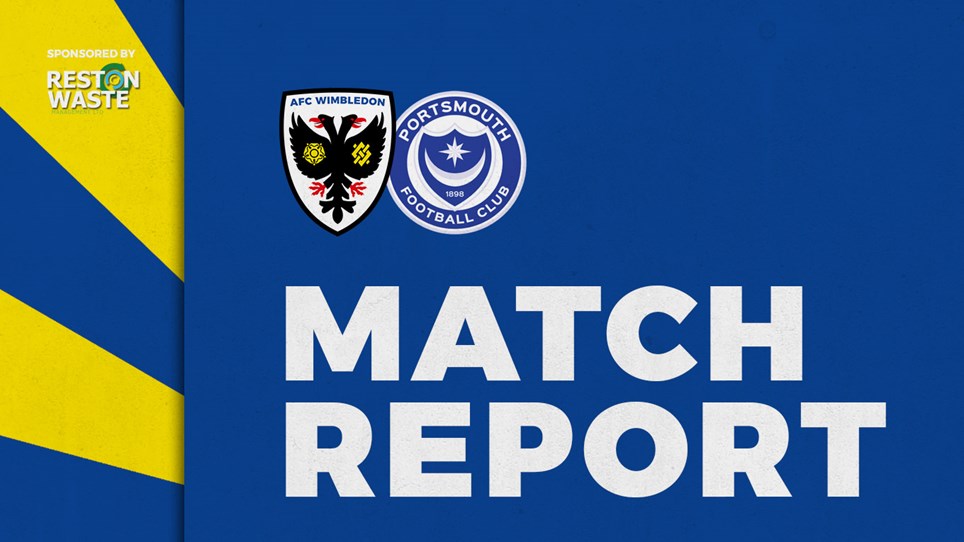 
AFC Wimbledon were fully deserving of a point on a night in which they fought tooth and nail with one of League One’s play-off contenders. 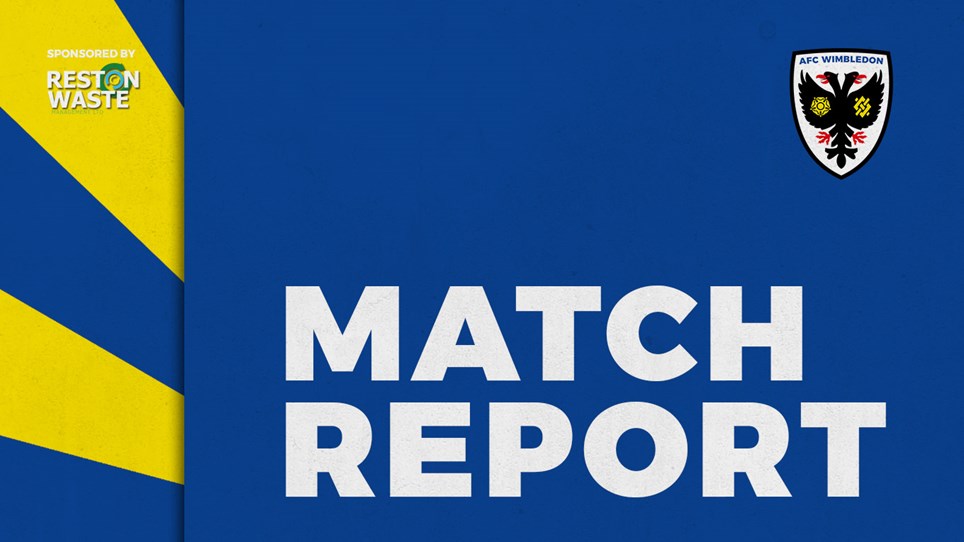 
AFC Wimbledon had to settle for a point after a pulsating second half when Robbo's team pressed hard for a deserved winner. 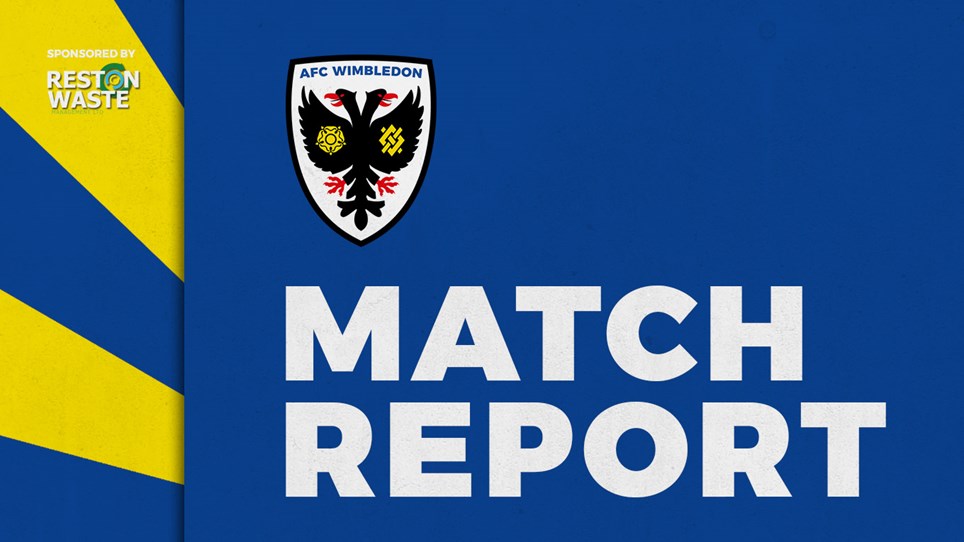 
Robbo’s battlers never stopped fighting in a cruel game when everything went against them - including a strong penalty claim in the final seconds.