AFC Wimbledon return to Wigan for the first time in almost three years with League One survival as the priority once again.

Back on 28 April 2018 the Dons spoilt Wigan’s title party by securing a 1-1 draw, thanks to a goal by Joe Pigott, as an important point was secured on the road to safety. The survival mission was completed at Doncaster a few days later and staying in the third tier of English football will once again be the aim as Wimbledon return to the DW Stadium.

The major difference this time around is that Wigan, in stark contrast from three years ago, are also in the relegation zone after enduring a difficult time on and off the pitch since going down from the Championship.

Wimbledon head to Wigan just one point above Saturday’s opponents, but our Interim Manager Mark Robinson said that the squad must play with ‘controlled emotions’ in the battle for League One points.

Below are quotes from both managers, team news, stats, and more:

“What we’ve been talking about in the last few days is having an identity. In the position we are in we have to take the emotions out of it. We have to play with controlled emotions. That’s really key. Of course, you want spirit, hunger, and work-rate, but those are givens. We have to get to a stage where we don’t even talk about those things. That should just happen naturally and you have to play with intelligence and controlled emotion with everyone knowing what they are doing.

“We’ve got the best fans in the country, you only have to look at what they do off the pitch for the club. Though they can't attend matches, we just want to give them something to be proud of, something to cheer about, and of course we need them to stick with us. I’m really confident that it’s going to come right, I know it’s going to come right if we keep the right processes going. I’m really proud and excited for the future.”

"One thing we haven't got is time on our side. We have to impose ourselves on each other and demand more from each other, myself included. We have to search for the results to keep us in this division. We've got to be better with our quality and our end product.

"The great thing about the current schedule is that the games come thick and fast, another game comes quickly and it's up to us to dust ourselves down, prepare properly and tackle the game in the right way on Saturday. What we have got is an honest group who stand for each other in this situation. All we can do is continue to do our best for the club."

Wimbledon’s squad will be boosted by the return of Darnell Johnson and George Dobson, both being ineligible to play in the midweek Papa John’s Trophy match at Oxford. Ben Heneghan has been out since the Boxing Day defeat at Oxford, but he has recovered from a hamstring injury and could return to the squad. Dan Csoka and Nesta Guinness-Walker were both left out for the game at Oxford as a precaution, and they are both back available again. Will Nightingale also returns to the squad, our captain having missed the Oxford game due to his partner going into labour. Alex Woodyard (knee) will have a late fitness test.

Wigan Athletic will welcome striker Jamie Proctor into their squad. Proctor, a loan signing from Rotherham, didn't sign in time to feature in the midweek defeat at Swindon, though he trained with his teammates on Thursday and Friday in preparation for Saturday's game. Leam Richardson confirmed in his pre-match press conference that striker Kyle Joseph will miss a significant period of the rest of this season after suffering a back injury. Lee Evans, Gavin Massey and Harry McHugh are all continuing their respective recoveries. 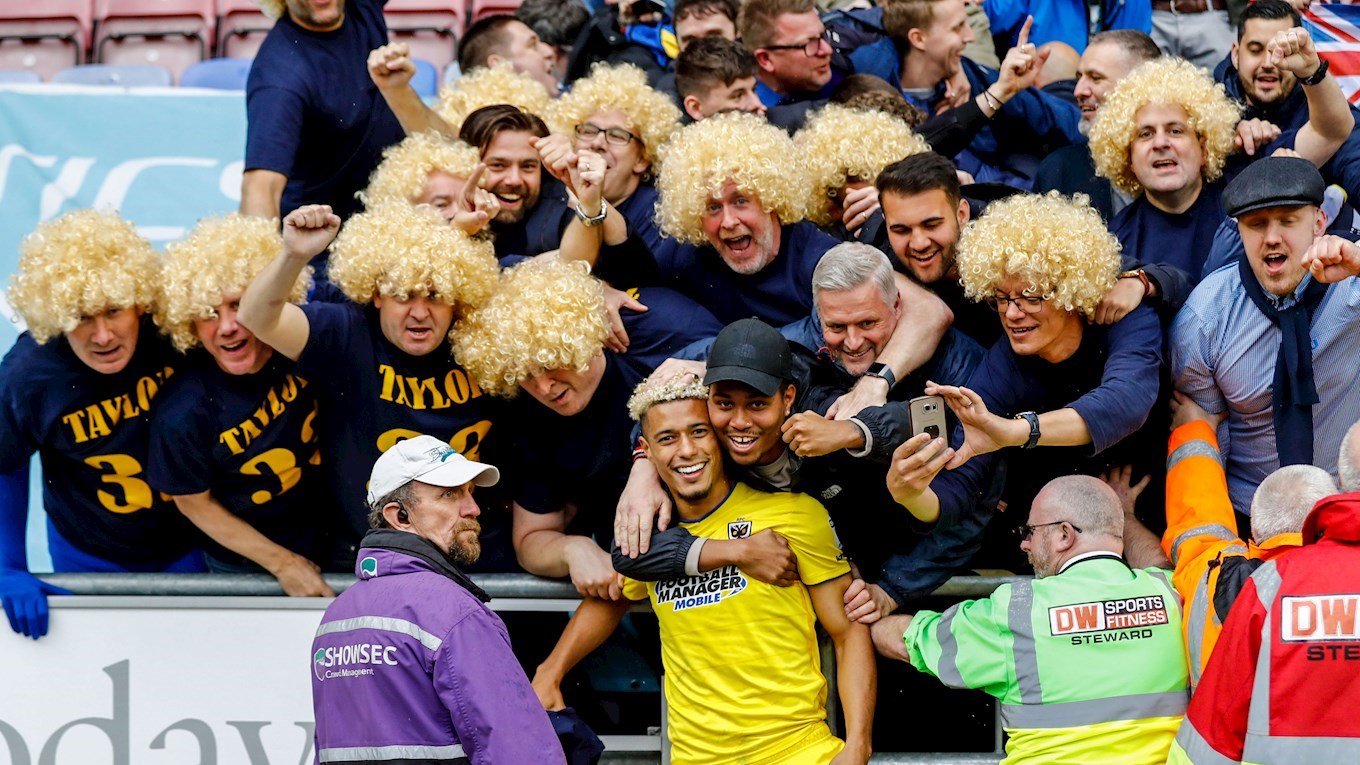 On 28 April 2018 the Dons earned a valuable point on the way to League One survival by securing a hard-earned point at Wigan Athletic. The 1-1 draw prematurely halted Wigan’s title charge, Wimbledon withstanding a late rally from the hosts after an equaliser by Michael Jacobs. It was a day when Wimbledon supporters memorably wore Lyle Taylor wigs in the away end! Click on the link below to watch the highlights from the game.

A bit about Wigan’s recent history

Since their Premier League days and winning the FA Cup by pulling off a shock victory against Manchester City in 2013, it has been a difficult time for everyone at the DW Stadium. Wigan were put into administration last season, therefore meaning a 15-point deduction and relegation to League One. Following Paul Cook’s departure, John Sheridan was appointed as manager, but he left to take over at Swindon in November, and that meant Leam Richardson, previously assistant to Cook, taking over the reins as Caretaker Manager. Richardson, who also worked with Cook at Accrington Stanley and Chesterfield, guided Wigan to impressive victories against Sunderland and Accrington at the start of December, but a 5-0 defeat at home to Rochdale put a spanner in the works, and they have only won once since – a 4-3 victory at Burton Albion.

There was a blow to Wigan’s League One survival hopes at the end of December when their top scorer Joe Garner had his contract cancelled by mutual consent, the 32-year-old subsequently departing for a fresh challenge with APOEL Nicosia.

You can watch the Dons on Saturday with a live stream available to access on our iFollow channel. Live match commentary will be provided on the day by Mikey T and Rob Cornell, so join them from 3.00 pm at the DW Stadium.