All at AFC Wimbledon were saddened to hear about the recent death of Leslie Brown, who will always be remembered as a key member of the club’s 1963 FA Amateur Cup win at Wembley.

Mick Pugh, Secretary to Wimbledon Old Players’ Association, has put together a fitting tribute to Leslie, who represented Great Britain at the 1960 Olympic Games in Rome.

The full tribute from Mick is below.

One of our most celebrated players, Les Brown passed away on 30th January after a short illness. Les was a personal friend of mine and he used to love meeting up with fellow survivors of our victorious Amateur Cup Final in 1963 when the Dons beat Sutton United 4-2 with four headed goals from Eddie Reynolds.

All the surviving team-mates from that memorable day - John Martin, Mike Kelly, and Dave Willis -have contributed their fond memories of this remarkable player.

His career started at Dulwich Hamlet, where his father, Harry, also a Dulwich player,  was club Treasurer. Les joined Dulwich juniors after leaving school, before progressing to the first-team and making 227 appearances, scoring 121 goals. He was the club’s leading scorer for three successive seasons, before gaining four England Amateur Caps and later travelling to Rome for the 1960 Olympic Games, representing Great Britain. In one memorable match at the Olympics, GB drew 2-2 with host nation Italy in the capital city. He also represented the Isthmian League, London and Surrey.

Les left Dulwich In 1961/2 to join Wimbledon and manager Les Henley was quoted as saying he was “the last piece of the jigsaw” for his rising Dons squad to become kings of the national non league game.

Dons right back, John Martin, also honoured as an Olympian for Great Britain, recalled: “Les became a good friend and neighbour as we lived in the same street, along with Mickey Moore, who played inside left for Wimbledon. Les had a fantastic eye for the ball and great positional awareness on the left wing. The Wimbledon team at that time were all great friends and we made many memories together.”

His talent for sport continued in his family as his daughter, Karen went on to play hockey for Great Britain. Karen was awarded the MBE for services to England Hockey in 2019, and Les was immensely proud of her.

Les is pictured above shooting at goal during the FA Amateur Cup semi-final versus Leytonstone and below he is shown scoring against Bath in the FA Cup in 1963. 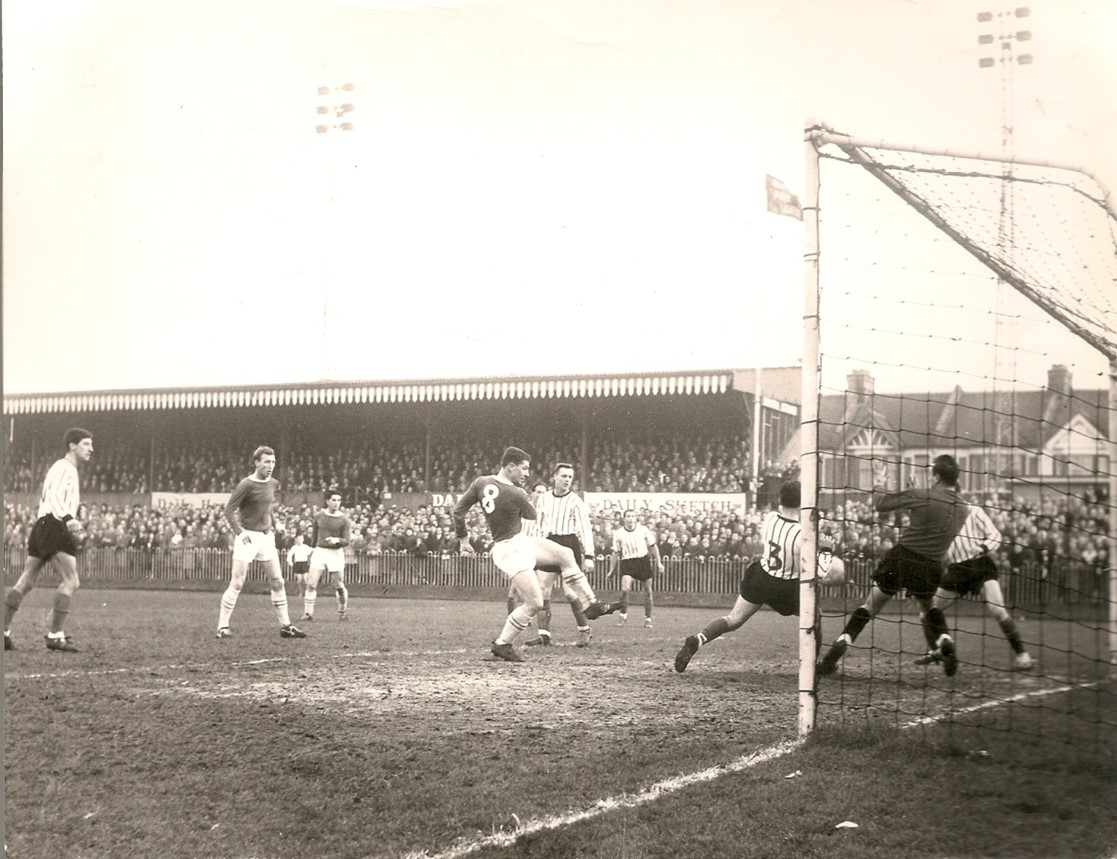 Another 1963 Wimbledon hero , Mike Kelly , was also an England Amateur international and he progressed to the professional ranks with Q.P.R, Birmingham City and Minnesota Kicks. He remembers Les as “built more like a rugby player, stocky and powerful.” However, one match incident versus Leytonstone summed up the spirit of togetherness in that Wimbledon team. After Les was on the receiving end of tough challenges by Leytonstone defender Ray Wood, team-mate Roy Law changed places with Les and a few moments later “collided” with Ray. This had the desired effect as Les was left alone to concentrate on his game for the rest of the match. Roy, as captain, always looked after his team mates. Mike remembers Les as being very athletic but also clumsy, on and off the field. Several players found out to their cost that parking near his car was a bad idea as you were sure to get some unwanted dents from the door of his car!

Les had a very strong sense of fun and the physio Tom Jennings always preferred to wear shoes instead of boots or trainers. This proved to be a bad idea as he would often be called onto the muddy pitch to attend to our “badly injured” left winger. When Tom got within a few yards of the casualty, Les would jump to his feet announcing, “I’m good now, Tom.” Tom could be heard muttering and cursing, returning to the dugout and wiping his shoes. Les winked at his team mates and played on with a wide grin!

Dave Willis remembered his sense of humour too during a match at Gloucester City. “Les ran into the goalmouth with such speed and strength that he not only collided with the upright but actually brought the crossbar down. There was a long delay while the club ground staff brought on a stepladder and tools to repair the goal. Les just got up with a smile and walked away! Les was very powerful and fast, but he also had the ability to provide excellent crosses for the other forwards, especially Eddie Reynolds”

Ian Cooke, later club captain of the famous mid 70s side, was at the club at the time and remembers Les as a “strong, hard player, who gave and expected no quarter to be given.”

Ian said: “Les was a regular goal scorer and favourite with the crowd because he gave his all and never stopped trying, which obviously contributed massively to the success that the club enjoyed during his time. His dry sense of humour with a wicked, cutting edge, was often very amusing. I believe that he was a true 'amateur' at heart and was not overly enamoured with the decision of the board to take the club into the professional ranks.

“A few years after he left the club I was playing cricket for NatWest Bank against Oxted and when I went into bat I was greeted by a rather funny comment from their wicket keeper. When I looked around I realised it was Les! Needless to say, there was some 'sledging' and general banter between us and we had a good drink together afterwards. I met up with Les on a few reunion/group occasions in recent years and he remained the same witty, friendly character, always willing to chat about 'the good old days' at WFC.”

The British Olympic Committee also paid tribute to Les. Linda McMahon said: “Leslie was an outstanding football player who represented Great Britain at the 1960 Rome Olympic Games and who I am sure inspired many in his sport.”

Over the years I have had the privilege of meeting up with the players of 1963. Les enjoyed meeting up with friends and team-mates and sharing stories of their time together on and off the field. Les was highly supportive of his friends and Yvonne Law tells me that he actually changed Roy’s direction in life by encouraging him to become a sales representative and introducing him to a very rewarding career after football. Previously, Roy was training to be a plumber and even turned down several approaches from Arsenal because he “wanted to complete his apprenticeship”. Les supported Roy throughout and was a frequent guest at celebrations and events with the Law family until his recent illness.

When Les was celebrating his 80th birthday I was asked by his wife Sue to get a “classic 1963 style shirt” and get our club shop to put “Brown 80” on the back. I drove down to the Sussex Golf Club to deliver the shirt, ready for a presentation. Little did I know but Sue introduced me as the speaker on behalf of Wimbledon FC! As I’d known Les for so long it was an easy and enjoyable task in front of his many friends from football, golf and cricket. Les retained his huge sense of fun until the end and made many friends in a very remarkable life.

As a boy, Les was evacuated in WW2, with siblings John and Margaret, to Limpsfield, and then to Newton Abbot, before returned to Surrey, where he attended Oxted Grammar School. Les was to marry three times and his first wife, Valerie, remained a very good friend throughout his life. They had three children Sean, Karen and Justine. Les now has seven grandchildren and three great grandchildren, who brought great joy to him. He was passionate about all kinds of sport, musical theatre, foreign travel and playing bridge.

Les was a chartered accountant and businessman and after retirement he went to live, along with grandson Sean, in Tenerife. Les met Sue there in 2005 and they married in 2011. Les and Sue moved to Steyning, West Sussex, and later to Lindfield, near Sue’s daughter, Mowenna. Les was able to indulge his “larger than life” passion for sport, watching local cricket and horse racing at Goodwood, but he also found time to visit Lords for cricket and Twickenham for international rugby.

Many of his friends paid tribute to this multi-talented man. Like his father Harry, he is celebrated at Oxted Cricket Club and Dulwich Hamlet Football Club, but Les will be remembered best for his huge enthusiasm for life, his kindness and support of friends and mostly for the love of his family. Les told me that he owed so much to his wife Sue and she was with him every single day throughout his illness.

I attended the funeral which took place at The Surrey and Sussex Crematorium, on 11 February. Joining many of his friends, I took part remotely, by invitation. His wife Sue and daughter Karen read the eulogies in a very moving service. The message came over loud and clear that Les was a great lover of life, a hugely enthusiastic and very gifted sportsman, a thoroughly dedicated family man and above all, one who left a “very large footprint” wherever he went.