When Joe Pigott scored a late equaliser in the crucial game against Rochdale in April, he joined a long list of Dons who have netted goals in added time.

Today, Stephen Crabtree recalls five of the best injury time goals in Wimbledon history, starting with a last-gasp goal by one of our greatest ever goalscorers – Alan Cork.

It was the last throw of the dice. With extra time ticking away in the FA Cup replay with Aston Villa, Dons boss Ray Harford decided to introduce his substitute. “It was cold – very cold and it was dour, dour game,” Alan Cork recalled. The pitch was slippery and I don’t think that there had been one chance all game. We must have been seconds away from penalties when Warren Barton launched the ball towards me and I threw myself at it and it went in off my shoulder.” There was barely time to kick off before the final whistle blew.

“I was delighted and I did the old Mick Channon goal scoring celebration, running for miles. Normally I’d just be happy to stand up and shake hands but running was the only way to keep warm. I also wanted to get as near to the tunnel as possible and head straight for a warm bath. It was one of those special nights at Plough Lane. The weather was miserable, the floodlights barely lit the pitch but the place was alive. Plough Lane and nights like the one against Aston Villa – that’s what Wimbledon was about.” 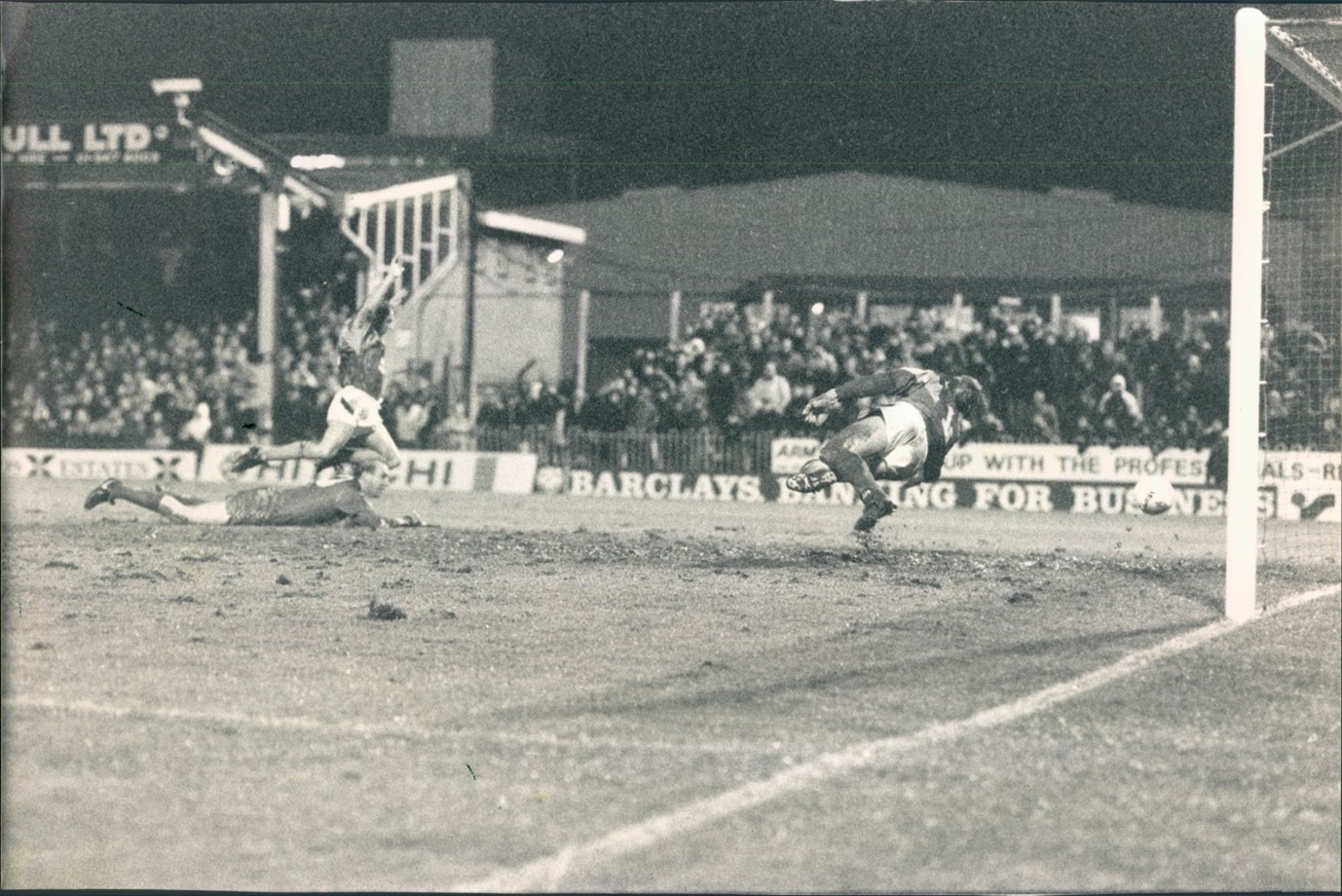 Desperately needing to peg back leaders Braintree Town during our first season of Ryman Premier League football, the seventh placed Dons were stunned to concede what looked like the winner in the last minute. Then the referee signalled seven minutes of added time and a great roar went up around Kingsmeadow as the team mounted several late attacks. With five of those extra minutes already used up, a free kick fell to centre back Steve Butler who gleefully hit the equaliser into the roof of the net.

“In the end our goal scoring opportunity fell to Steve Butler and there is no one I would rather have in that position at the moment,” manager Dave Anderson said. “Steve’s a great captain both on and off the field. It’s not a great result for us as we needed to reduce their lead but it is probably fair. I thought our supporters were magnificent tonight. 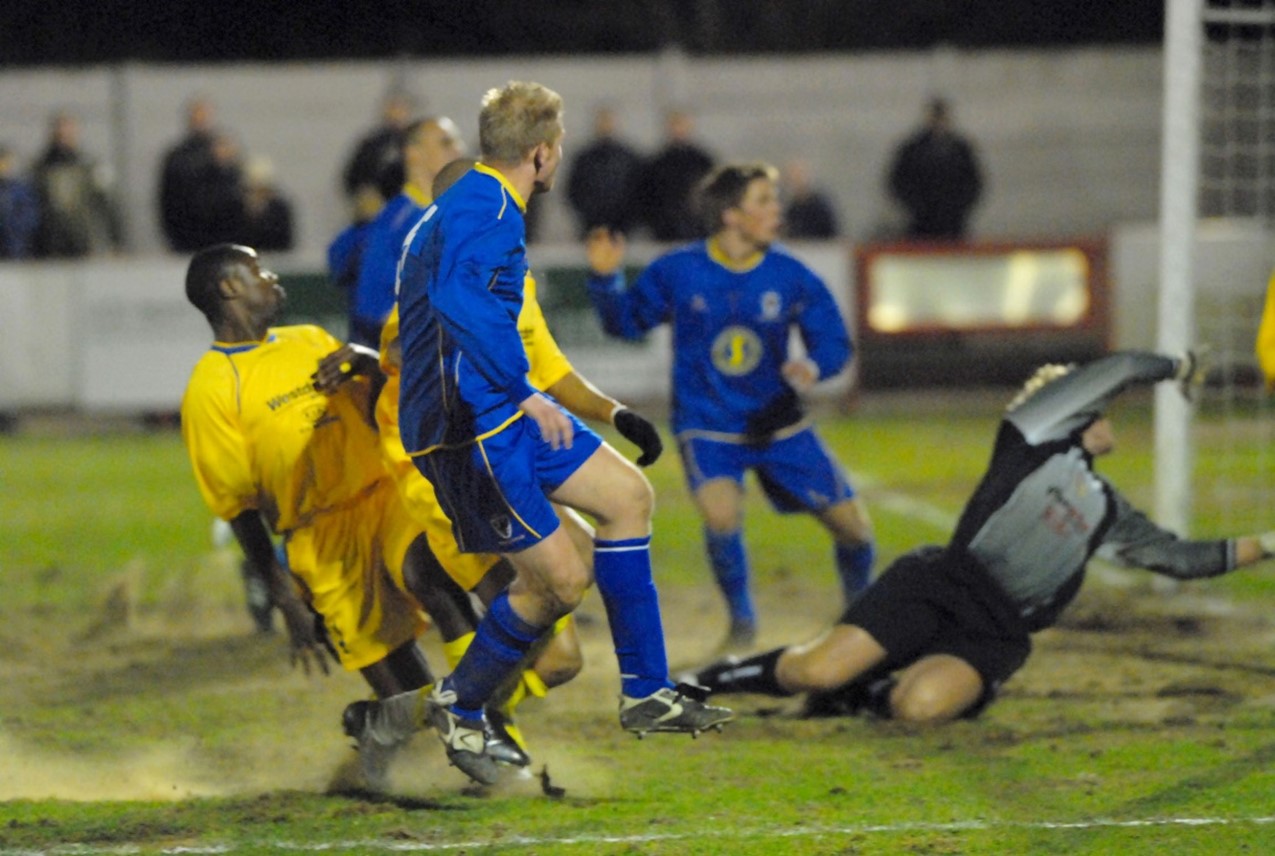 With our Premier League status hanging by a thread after eight successive defeats, the Dons were in the bottom three and trailing 1-2 to Aston Villa as injury time in the final home game of the season began. Suddenly the news came through that Bradford City had lost, meaning a Wimbledon goal would put us in the driving seat to stay up. With the near 20,000 crowd at fever pitch, several late corners were forced and from the last John Hartson headed home. Pandemonium ensued.

The 2-2 draw meant that Wimbledon had climbed out of the relegation places on goal difference and had only to win their final game to secure safety. Having regularly defied the odds during a 14-year stay in the top flight, surely the Dons could win at mid table Southampton on the final day? But it proved to be beyond Egil Olsen’s side and an agonising 2-0 defeat at the Dell followed. 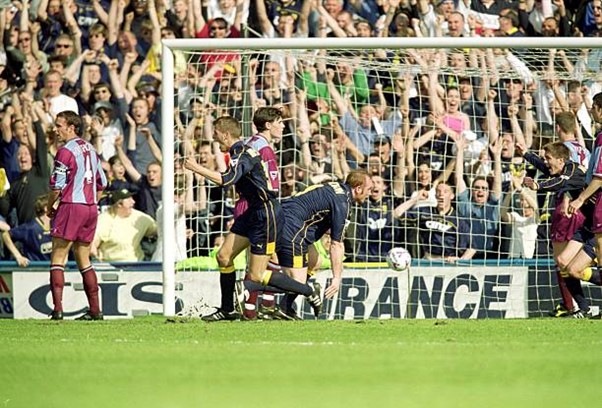 The class of 2018/19 simply never knew when they were beaten. Seemingly down and out in mid-February, six wins and four draws in 12 games had rekindled hope that relegation might be avoided as the Dons travelled to take on promotion-chasing Luton Town. Despite a brave display at Kenilworth Road, we were trailing 2-1 deep into injury time when, in the last attack, left-back Steve Seddon got forward and hurled himself at the ball to secure a draw with just moments remaining.

“When you score a goal in the 93rd minute everyone is happy, no matter what the score, either 3-2 or 2-2,” manager Wally Downes said. “To do that in front of the travelling fans is fantastic. We went over there together at the end and saluted them for coming. They had sang their hearts out against 10,000 and we made as much noise.” A win against Wycombe and a final day draw at Bradford saw Wimbledon complete an unlikely Great Escape.

Relegation was starting to look a real possibility with just moments remaining. But at 3-2 down against fellow strugglers Rochdale with seven minutes of added time already played, Joe Pigott, who had missed a late penalty, showed he had ice in his veins as he fired the ball home. The game the Dons dared not lose had ended in a draw that all but guaranteed League One safety. The result moved Wimbledon to the magic total of 50 points – six clear of the teams in the drop zone with two games remaining.

“We’ve been together for 19 games now and we’ve [only] lost five,” head coach Mark Robinson said. “So their record is excellent and I’m proud of what they’ve done, but that’s why it hurts so much tonight with the manner of the goals conceded. What’s been pleasing is that it hasn’t been backs to the wall and 10 men behind the ball in games – we’ve played our way out of it. That’s the pleasing thing, that we’ve played our way out of it - now let’s finish the job.” 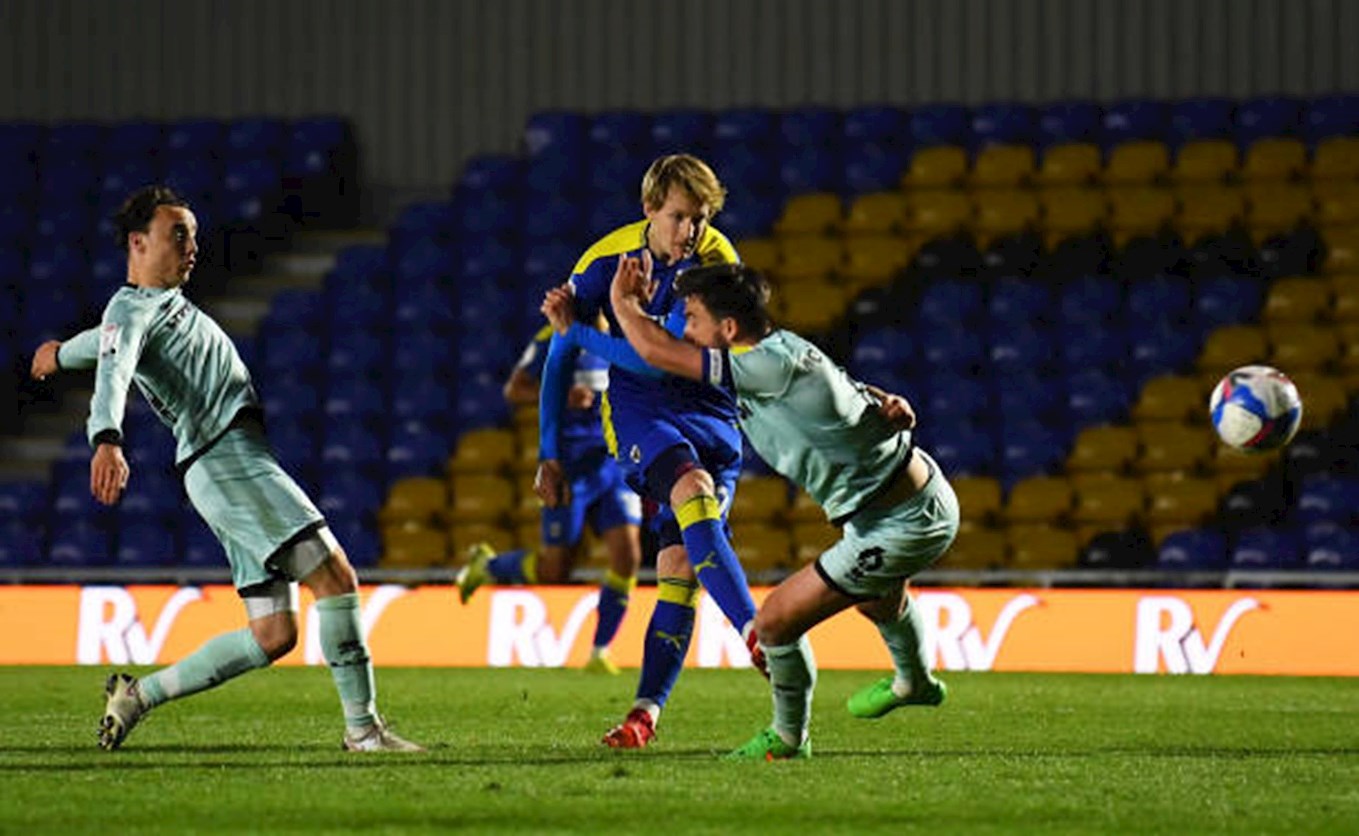