A Dons fan in the service of Queen and country.

The story of Marc Wilkinson is nothing short of remarkable. An avid Wimbledon fan who grew up in Hayes, Ruislip and Uxbridge, Marc joined the Army at the earliest opportunity at the age of 16 as he embarked on fulfilling a dream that was born out of his patriotic personality and willingness to do something for the country that he loved so dearly.

He went on to become the youngest recruit in his class and the youngest soldier to patrol the streets of Northern Ireland as a proud member of The Royal Green Jackets. Marc also served in Bosnia, Germany, and Afghanistan before picking up an injury after coming into contact with an Improvised Explosive Device, which saw him being flown home in order to continue his recovery.

After returning to the UK, Marc suffered from Post Traumatic Stress Disorder (PTSD) and sought help from two military charities, Haigh Housing and Combat Stress. It was during his time with Combat Stress on a six-week course that he got in touch with our Commercial Director, Ivor Heller, to see if the club could do something to help his set.

Ivor, along with our then management team of Neal Ardley and Neil Cox, all visited Combat Stress to provide encouragement to the group before inviting Marc to the training ground on several occasions, with the most memorable of these coming at a time when the club were facing the pressures of a relegation battle.

Marc gave an inspiring speech to the players and management team that left them all with a great deal of respect for the sacrifices that both he and his comrades had made during their years of service for this country.

Sadly, Marc passed away unexpectedly at the age of 39 on 17 May 2017 from a heart condition that he or his family had not previously been aware of. He is missed by everyone who knew him best.

Marc’s legacy lives on in the form of a book he wrote over the course of a few years, which is fittingly titled: CRAZY GANG - A Dons Fan in the Service of Queen and Country, in which he charts his revealing personal service memoir of the good, the bad and the ugly sides of Army life.

BTPL Editor Chris Thorpe recently caught up with Marc’s father, Roy to discuss the book and his son’s life.

“Most of the proceeds from Marc’s book are going to go to Combat Stress because Marc suffered really badly from PTSD and he ended up going to Combat Stress at Leatherhead for six weeks to get treated and that’s when we first got in touch with Neal Ardley and Coxy.

“They came down to Combat Stress and saw the lads in there and that’s where our relationship with the club became more family friendly and personable.

“All Marc wanted was to show that he was very patriotic, and as it says in the book, he wanted to do something for England. When he buggered his leg up playing football he joined the Army at 16 and, of course, when he got injured on duty he wanted his legacy to reflect how much Combat Stress meant to him.

“He had Vinnie Jones on the back of his shirt and all sorts, so that’s where his nickname Vinnie came from. In fact, Vinnie actually sent us a video message of condolence when Marc passed away and it was a great touch. Marc was a good lad, and we all miss him dearly.”

Wimbledon director Ivor Heller also had some words to say about Marc as he recalled the moments they spent together over the years:

“Meeting Marc and working with his Cohort at Combat Stress was one of the best things I have ever done. Marc became a good friend and was an absolute Don of Dons. His support was unwavering for us and his fellow veterans. I am proud to have been his friend.”

You can purchase a copy of Marc’s book 'Crazy Gang' 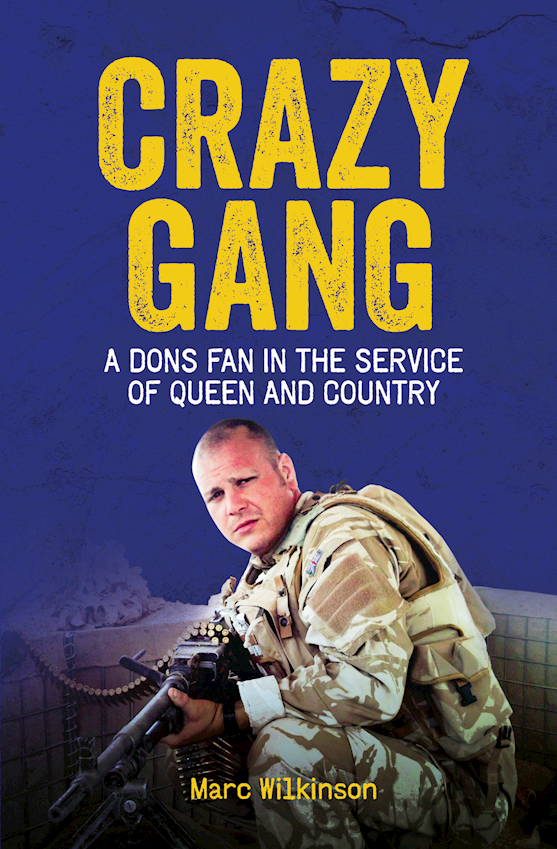