One of our FA Amateur Cup winners from 58 years ago was yesterday joined by a quartet of former Dons heroes from another successful Wimbledon era.

Dave Willis, who starred at Wembley in 1963, attended the Emirates FA Cup match versus Guiseley as a special guest, along with Billy Edwards and Jeff Bryant.

Of course, our President Dickie Guy and Vice President Ian Cooke still attend matches regularly at the Cherry Red Records Stadium to cheer on the Dons at a venue just around the corner from where they became Wimbledon legends.

The picture above shows (left to right): Dickie Guy, Ian Cooke, Dave Willis, Billy Edwards, Jeff Bryant. The photograph below shows Barry Briggs at the game yesterday. A former World Champion, Barry was back on the site where he made his name with Wimbledon Dons in Speedway. Over the years Barry has attended our matches to show his support. 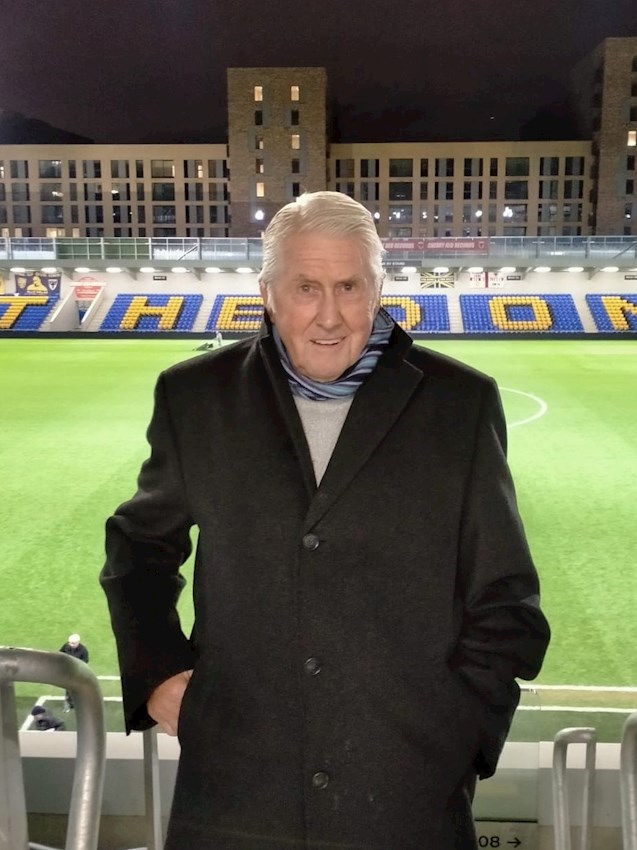 Billy, Jeff, Dickie and Ian played in our all-conquering Wimbledon side managed by Allen Batsford with three Southern League titles clinched in successive seasons. During that era they were also involved in that memorable 1975 FA Cup run, which ended with a gallant defeat against a Leeds United side that won league titles and reached the European Cup Final.

WiSH were delighted to welcome our heroes from the past as special guests. Dave, who joined Wimbledon straight from school in 1958, is still showing off his talents to this day by playing walking football!

A host of Dons heroes are supporting the campaign by WiSH (Wimbledon in Sporting History) to create a timeline experience in the West Stand concourse. It will celebrate the amazing history of Wimbledon and AFC Wimbledon, marking our journey from 1889 until now, and your picture will be included if you make a donation.

Following numerous requests after the initial crowdfunding deadline, WiSH extended it by one week with fans welcome to donate via direct transfer. E-mail info@wimbledoninsportinghistory.co.uk .

Click on the link below to watch Mick Pugh with our Wimbledon heroes in the WiSH museum.