A third defeat on the trot for the Dons is certainly no cause for panic, but this reverse in Shropshire was certainly a very frustrating loss for Robbo’s boys.

Leading thanks to a superb team move, clinically finished off by Dapo Mebude, it all looked so promising for Wimbledon, but Shrewsbury turned the match on its head to win 2-1. There was little doubt that the better footballing team lost this game, but the home side’s resilience and tenacity won the day. Indeed, Robbo said afterwards that the Dons cannot resemble a ‘pretty football team' with little purpose, and character will be required to bounce back at Rotherham on Tuesday night.

At times in the first-half Wimbledon had all the hallmarks of a quality team as they quietened the home crowd with an impressive brand of football that put the hosts on the back foot. However, as Robbo said afterwards, playing that way must be backed up by substance and steel. The home side certainly showed more of the latter qualities – and that’s how they secured all three points. Nevertheless, it was not a defeat to be too deflated about as the Dons still played a lot of good football, and there are plenty of points in the bag at this stage of the season.

Following the gallant Carabao Cup exit at Arsenal, Mark Robinson made three changes to his starting line-up. One of those was enforced with Ollie Palmer having been ruled out due to a calf injury, and that meant Aaron Pressley was handed a starting role. Dapo Mebude and Cheye Alexander also started the game in place of Jack Rudoni and Henry Lawrence. Shrewsbury came into this match seven points behind Wimbledon at this early stage of the season, but they hadn’t conceded many goals recently, and a 1-1 draw at Sheffield Wednesday last time out showed their defensive resilience.

The Dons started on the front foot and after a great 50-yard run by Ayoub Assal, his pass fell nicely for Anthony Hartigan, who shot just wide. That was a good sign, and so too was the vision of Shrews defenders backing off every time Assal picked up the ball. Another one of his marauding runs ended with a pass in the box to Dapo Mebude, but he was just unable to get the ball under control. Despite the Dons starting well and looking dangerous, Shrews had the best early chance when Shaun Walley tried his luck with a shot from outside the box that Nik Tzanev parried, and our keeper reacted superbly to stop the follow-up from Ethan Ebanks-Landell.

That rare chance for the hosts failed to deter Wimbledon from taking the game to their opponents. A great chance followed when a cross was sent into the box by Luke McCormick, and Ayoub Assal flicked the ball into the path of Aaron Pressley, who had his shot saved by Shrews keeper Marko Marosi. Though Pressley connected with the ball well, his effort was too close to Marosi. However, that was just a temporary reprieve for Shrewsbury as Wimbledon marched into the lead in style. It was simply a superb breakaway goal. Assal picked up the ball and powered forward, before unselfishly picking out McCormick, who quickly laid it into Mebude’s path and he produced a clinical finish into the bottom corner.

At a vital time leading up to half-time came a Shrewsbury equaliser, which came completely out of the blue. It was a simple goal in its execution as a cross came in from the Shrews right and Luke Leahy was left unmarked to head home. All of a sudden it was a different game now as the home support got behind their side, and Tzanev held on well to save a shot by Whalley. The Dons had looked very threatening in attack throughout the first-half with good football played at times, offering encouragement for the second-half. However, the end to the first-half had given Shrews a lifeline after Robbo’s boys had looked like taking a firm grip on this game.

At the start of the second-half the Dons attempted to recapture the control of the first-half, but Shrewsbury were doing everything they could to stop that happening. Aaron Pierre, a big physical figure in Shrewsbury’s defence, attempted to knock Assal out of his stride, and he held our attacking talent back close to the touchline, but neither the man in the middle or his assistant seen it. Seconds later and Assal’s frustration showed as he chased back and produced a late challenge that resulted in a booking.

A good Dons move involving Assal and Hartigan ended with a shot wide by Luke McCormick, but the Dons had not quite found the key to the door again as we approached the hour mark. With Hartigan and Alex Woodyard forming an impressive partnership in midfield once again, Wimbledon started to exert control, and two chances in quick succession followed. The first needed a fine save by Marosi to keep Wimbledon out when he dived to his right to just get a hand to Aaron Pressley’s powerful header. Hartigan delivered a superb corner from the left that Ben Heneghan did very well to meet first, but he was only able to direct his header wide.

Shrewsbury’s main tactic of winning free-kicks and corners paid off when they took the lead in the 67th minute. A flag kick was cleared by Wimbledon out to the right flank, but Leahy delivered an in-swinging cross back into the box and Shrews substitute Daniel Udoh got there before Nik Tzanev to head home. Henry Lawrence and George Marsh had been ready to come on before the goal and they finally entered the fray straight away with Nesta Guinness-Walker and Anthony Hartigan making way. Jack Rudoni also came on and he missed a golden chance to equalise shortly afterwards. Cheye Alexander delivered a superb cross from the right that Rudoni got on the end of, but he headed wide from close-range.

In the latter stages, Shrewsbury defended deep, but the Dons struggled to open up their opponents. Luke McCormick showed superb skill to go clean through, but his shot was deflected wide, and in the final minutes the hosts ran the clock down by keeping the ball in the corner and winning throw-ins. It was enough to see the hosts through to victory, and the Dons will now need to bounce back at Rotherham on Tuesday after three successive defeats. 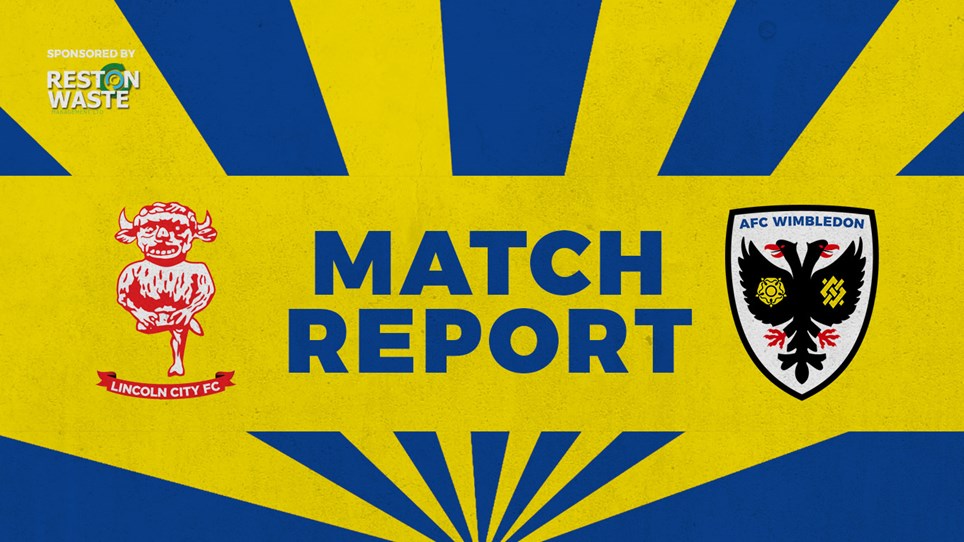 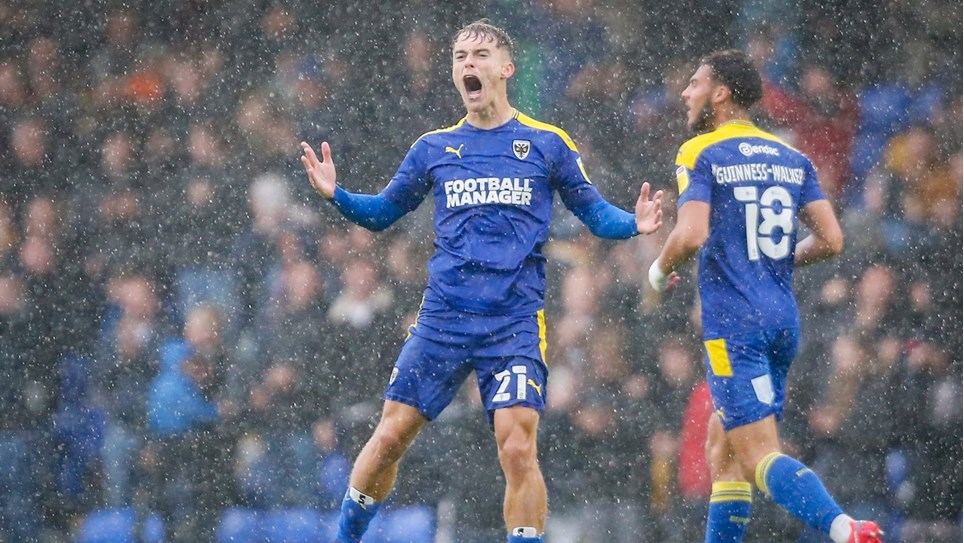 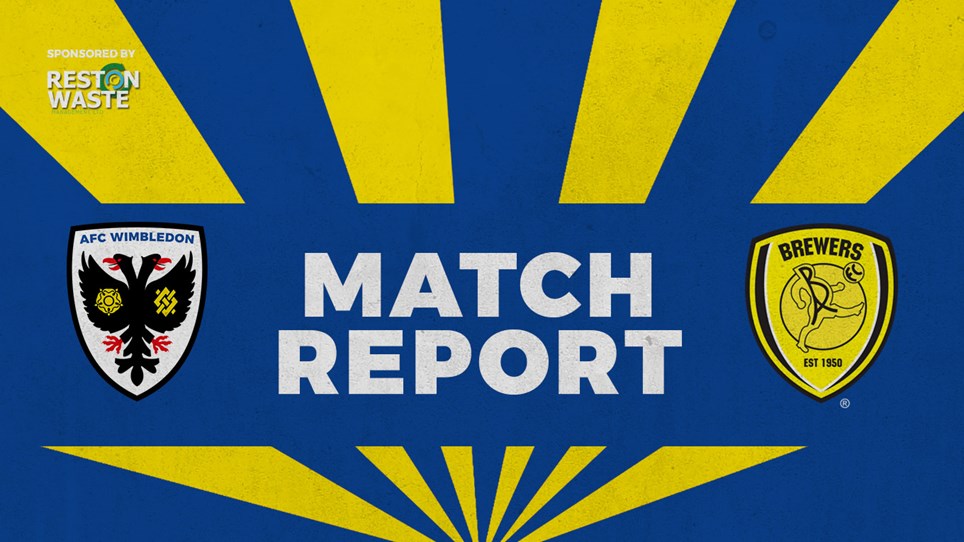