Mark Robinson last night paid glowing tribute to the army of volunteers who are helping us tell the greatest story in football.

The doors of our brand new Plough Lane exhibition officially opened last week and Robbo was there to see for the first time all the precious and historic memorabilia on  display.

It was also a  special moment for many dedicated volunteers and especially Wimbledon in Sporting History (WiSH) who spearheaded the project.

Over a three-year period, 24 volunteers donated 8,500 hours without claiming back any personal expenses.

Memorabilia valued at over £1million was donated or loaned to WiSH and over £210,000 came in through donations.

The exhibition, entitled 'The Greatest Story in Football', is just the beginning as well! WiSH have ambitious plans to launch interactive digital displays and also create a timeline along the corridors and concourses of our new stadium that will further bring our incredible history to life.

Said Robbo, a WiSH ambassador: "I love the passion and enthusiasm behind WiSH and The Greatest Story. You can see it's something that has only just started and it's going to grow and be innovative, which is exactly what every part of our football club needs to be like."

Many of the wonderful exhibits were saved when vast amounts of  Wimbledon FC memorabilia ended up on the black market in 2002 - and were bought up by worried supporters anxious they didn't end up in the wrong hands.

John Lynch, Head of Partnerships at WiSH, explained: "There were about six collectors who bought up various items. Many were stored under beds and in lofts and we all dreamt that one day they would be put on display and become a lasting legacy for the club, its supporters and all sports fans."

Michael Padmanathan, WiSH Managing Director, added: "When the move back to Plough Lane looked increasingly likely, our  dream was to have a space where we could share this story.”

The cost of fitting out the exhibition alone was around £5,000, which was funded by 24 Founder Memberships at £250 each.

To keep within the tight budget, volunteers had to collect memorabilia from different corners of the country - as well as lay  flooring, paint the exhibition room and tackle various DIY tasks.

The exhibition is the realisation of a dream that took shape back in 1991, when our former player Dave Willis asked Mick Pugh (Head of the Wimbledon Old Players Association at WiSH) to look after his full kit from the 1963 Amateur Cup final at Wembley. The picture above shows Dave with his kit from that magical day 58 years ago.

Mick stored it safely away, wrapped carefully in plastic, and dreamt that  ‘one day this kit will be in our museum’.

Thirty years later that dream came true and both Mick and Dave were among over 70 guests invited to the opening. Also there was Will Nightingale, also a WiSH ambassador, and representatives from AFC Wimbledon, The Dons Trust Board, DLAG, AFC Wimbledon Ladies and the Academy.

The exhibition room (accessed through  the club shop at Plough Lane) was officially opened by our club president Dickie Guy and Maureen Batsford, widow of our legendary manager Allen. 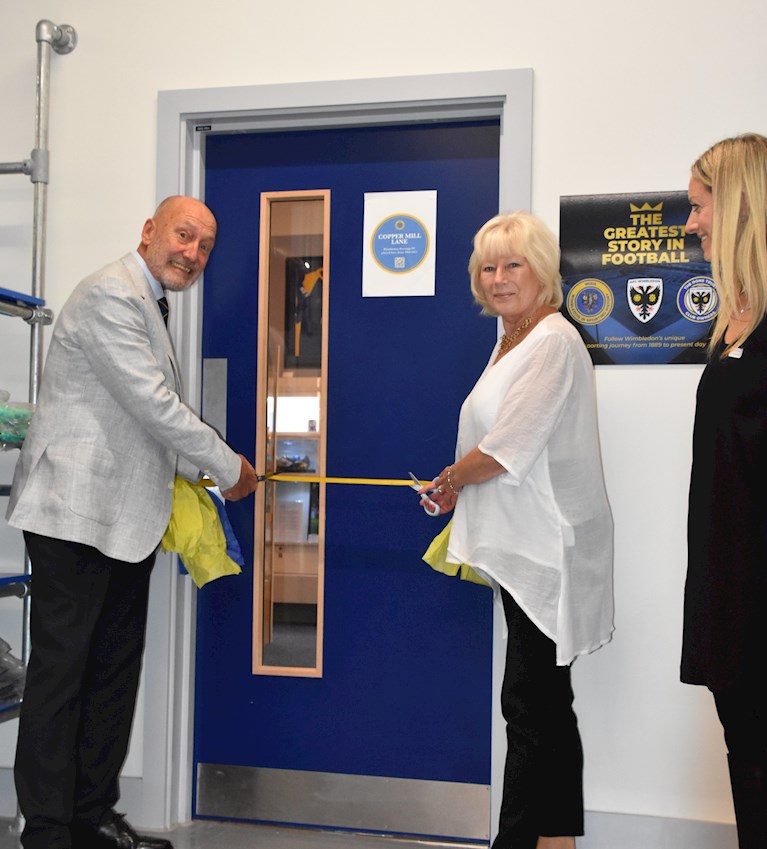 Phase Two of the project has already started and the team has already raised over £50,000 through grant funding to further expand the exhibition and create a digital experience.  Details can be found on the new WiSH website.

The exhibition will be open to the public every Wednesday from October 6 onwards and is free to enter.

It will also form part of the wider Plough Lane Stadium tour, which will be chargeable. Visit the WiSH website for more details.

If you would like to get involved and help WiSH continue to tell our amazing story then please visit this page .

WiSH will also be keeping Founding Memberships open for the rest of the year. For more details, visit their website .

View a full video of the opening ceremony.