We’re counting down to our big Carabao Cup tie at the Emirates Stadium by recalling memorable matches against Arsenal from our top-flight years.

Today, Stephen Crabtree turns back the clock 34 years to a post-Christmas clash when the Dons came from behind to earn victory. The picture above shows John Scales brushing off a challenge by Perry Groves.

Suddenly, the Dons were being seen as contenders. Cleverly refashioning the side in the wake of Dave Bassett’s summer departure, Bobby Gould and Don Howe had gradually won over the dressing room by retaining and refining the never-say-die spirit that made the side such a formidable force. A first victory over Arsenal, thanks to second half goals from Alan Cork, Dennis Wise and Vinnie Jones, meant the team entered 1988 in the First Division’s top six.

“I think I am improving all the time,” Eric Young commented after another impressive display at centre back. “At the start of the season when we lost to Watford it was just a question of the new players understanding the system. At first, it was a bit difficult, but now everyone is used to the way Wimbledon play. I believe the best is still to come. We will keep up with the leaders in the First Division, I’m sure of that.” 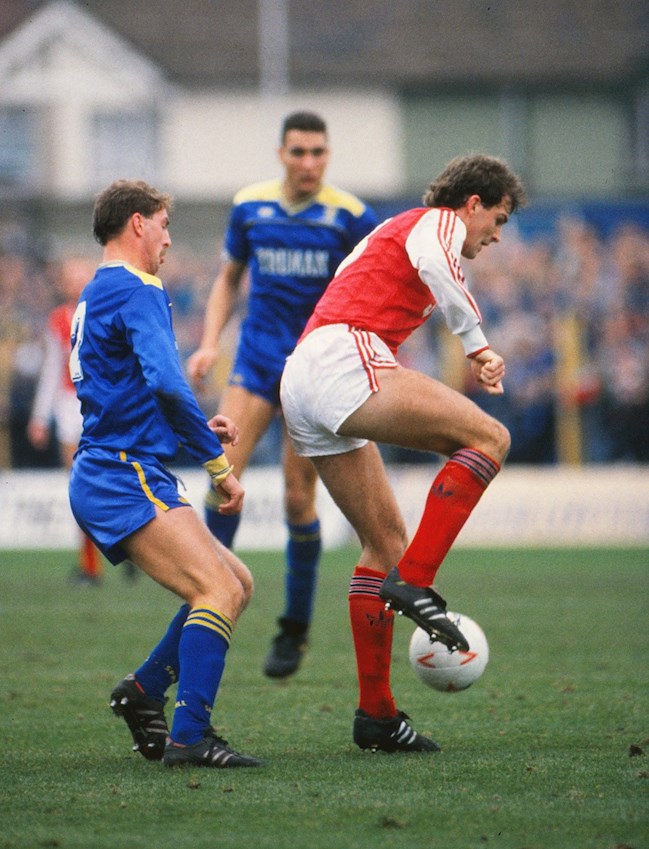 The picture above shows Clive Goodyear making sure there's no way through for Martin Hayes.

After his West Bromwich Albion side had been beaten 4-1 in the FA Cup third round in January, Ron Atkinson captured the view of many in football. “No one wants to come here,” the Baggies manager said. “Manchester United and Arsenal have already been beaten at Plough Lane this season and even Liverpool could only draw. Everyone will be hoping to avoid Wimbledon in the fourth round draw as they are such a powerful side.”

The Dons were on course for that Wembley date with destiny.

Stephen Crabtree is the editor of The Historical Don - a fanzine dedicated to celebrating the club's glorious past. The remaining copies of issue 33, plus back issues will be on sale at the Plymouth game for £2 each.