With just one day to go until we visit Arsenal, Stephen Crabtree recalls a famous Wimbledon victory at Highbury from our Premier League days.

Wimbledon’s stock had surely never been higher. A well taken goal from Vinnie Jones mid way through the first half was enough to defeat Arsenal and leave the Dons 12 points behind Premier League leaders Manchester United with three games in hand. Already through to the quarter finals of the FA Cup and fresh from holding Leicester City to a goalless draw in the first leg of the League Cup semi final, Joe Kinnear’s men were on the verge of greatness.

“This season is special not just because of our success but because of the way we are doing it,” owner Sam Hammam said. “Fighting on three fronts is a big test for us but if we are going to be a big club we are going to have to learn to play that way all the time. We now face six games in 18 days that will make or break our season.” Sadly, fixture congestion took its toll with the Dons finishing 8th in the Premier League and agonisingly knocked out of both cups at the semi final stage.

Asked in retirement to identify his toughest opponents during his 20 years in charge at Arsenal, Gunners boss Arsene Wenger singled out the Dons. “Wimbledon when I first came to England,” the Frenchman replied. “We struggled with the intense physical nature, organisation and determination of that side.” It was quite a tribute from a man widely regarded as the north London giants’ greatest manager. 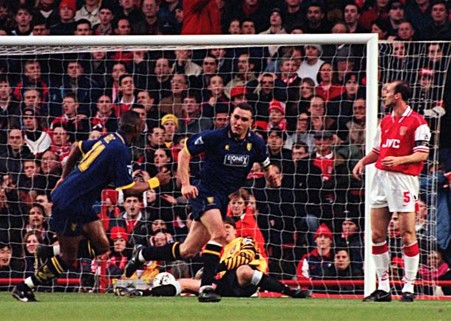