We were saddened to hear about the death of Gerry O'Rourke, who scored 149 goals for the club during our Southern League days.

A tribute piece by Stephen Crabtree on Gerry (second from left on the front row of the above picture) is published below.

Never less than whole-hearted and committed, Gerry O’Rourke will be remembered fondly by older supporters as a regular member of the club’s attack for nine years during the Dons’ period in the Southern League.

Signed by manager Les Henley from Hendon as the club turned professional in 1964, O’Rourke immediately formed a prolific partnership with Eddie Reynolds. The former Scottish international contributed 30 goals to the 75 the pair plundered as Wimbledon surged to promotion from the Southern League First Division. In the spring, the club turned down an offer of £5,000 from Luton Town for the striker’s services stating that he was “not for sale.” 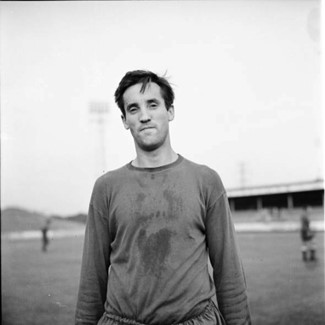 With Reynolds sidelined the following year, O’Rourke led the attack alongside scoring sensation Ian Cooke. Each man contributed 25 league and cup goals as the Dons finished fifth in their first season in the Southern League Premier Division. The club’s stated aim was to win a place in the Football League and they nearly achieved it securing third and second placed finishes over the next two seasons with O’Rourke contributing 20 and 24 goals respectively.

The death of chairman Sydney Black in the spring of 1968 meant the club was no longer the best funded in the Southern League, but O’Rourke continued to lead the line bravely despite receiving a good deal of rough treatment from the centre halves of the time. His total of 22 goals over the next two seasons reflected the club’s gradual decline and when new manager Mike Everitt arrived he was initially released before being resigned.

He played for two more years and when he left Plough Lane he had made 409 appearances and scored an impressive 149 goals. He moved to live and work on the Isle of Wight and came to watch when AFC Wimbledon played Newport (IOW) in 2005.