Wimbledon players from our golden age in the 1970s attended the launch of a fantastic mosaic featuring 5,000 photos of Dons supporters.

Ian Cooke, Dickie Guy, Billy Edwards, and Jeff Bryant (pictured left to right above with Wimbledon in Sporting History volunteer Mick Pugh) were on hand for Saturday's unveiling, which was attended by supporters of all ages.

The big reveal came after months of campaigning, planning, and designing by the WiSH team. Project manager Matthew Couper unveiled the mosaic mural of the iconic image of the closed big blue gates at the old Plough Lane stadium, emblazoned with the graffitti  "Womble Til I Die".

“It was really important to us that this was a one club effort. We’ve got the men’s first-team represented, the ladies team, the Foundation, and DLAG, but most importantly it’s the fans. I’ve got pictures of me up there from back in old Plough Lane days when I was a programme seller! You’ve got pictures on the mosaic with fans lifting the FA Cup, with their pets, and even at the top of Everest. What’s also important is that there are pictures of people who are no longer with us, so it’s also a memorial in a way. It’s a real celebration of us.”

The mosaic is a wonderfully creative design putting those fans and the club's history at the heart of the new stadium.  The image itself was chosen in a vote by the 401 fans and others who donated to a WiSH driven crowdfunding campaign in the autumn of 2021 to raise funds to pay for this mosaic - and the rest of the heritage timeline which will adorn the stadium's main concourse.  The rest of the timeline will be installed in the next couple of months, and will highlight key moments in the history of football in Wimbledon from its origins in 1889 to its return to Plough Lane in 2020 - "The Greatest Story in Football".

Fans who donated to the crowdfunder were able to submit photographs to be included in the mosaic unveiled on January 15th, with 1,443 photos submitted in all - many of them being used multiple times to make up the mosaic which comprises over 5,000 photos.  The mosaic also includes a number of QR codes, which when scanned take you to video footage of some of the highlights of Wimbledon's footballing history, from the 1963 FA Amateur Cup Final through to the present day. 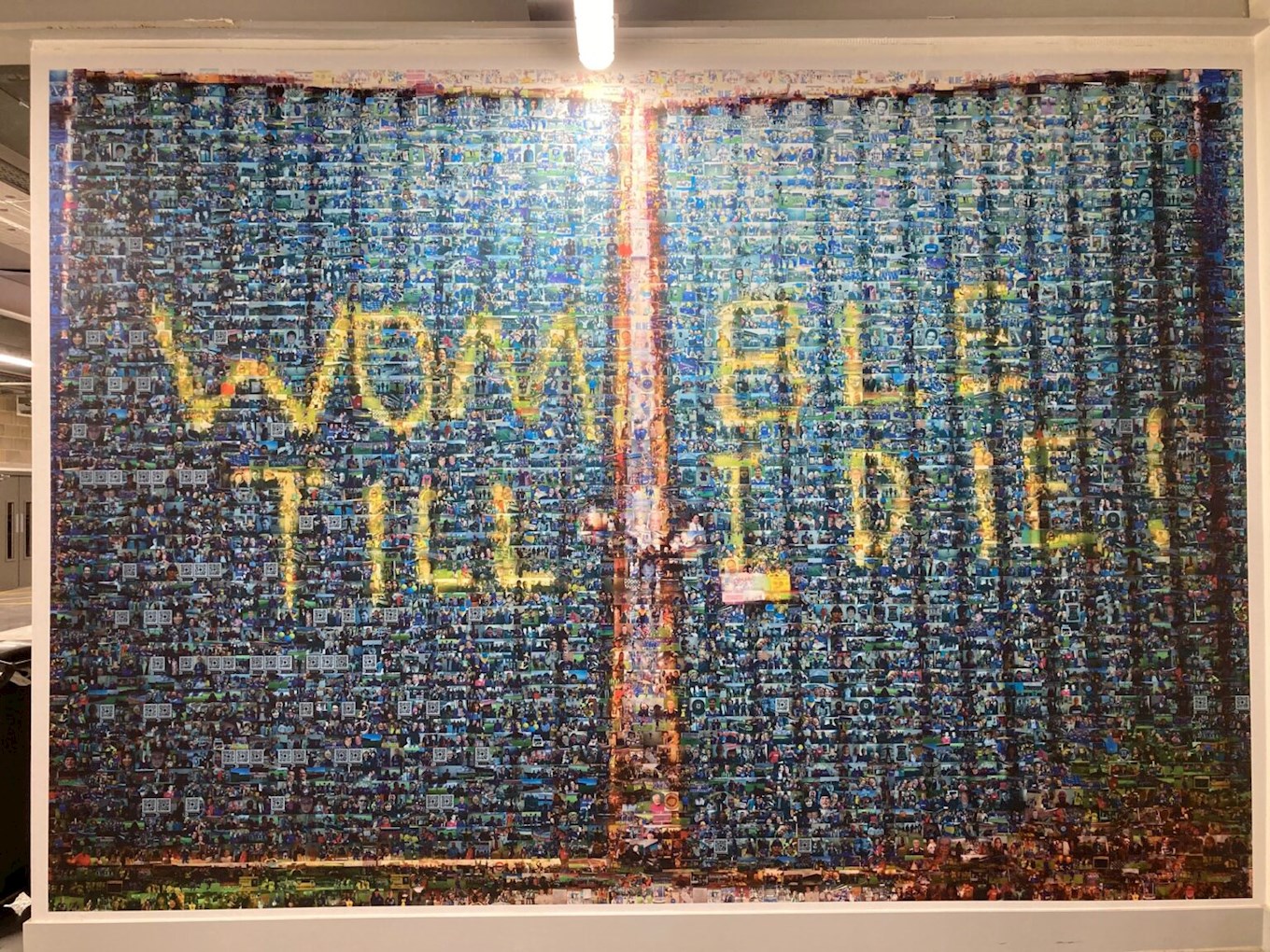 Speaking about the unveiling, supporter Jess Barnes said: "My Dad unfortunately didn't get to come to the opening of the ground as he sadly passed away before we got here. So it's really lovely to see a picture of him with my sister at his last game at Wembley in 2016. He passed away in 2019, but he's part of the ground now.  So you feel like he's been here...happy memories.

"There are other people on there too who obviously couldn't be here, and it's lovely. For my Dad, he will always be here when I come in. My eyes go straight to him because he's on the bright bit. It's just lovely."

Head of Partnerships at WiSH, John Lynch, said: "Every section of the club has come together, making this a symbol of what 'One Club" means."

Billy Edwards, who played an integral part in Wimbledon’s rise to the Football League in the 1970s, added: “I was invited to see the new wall here at Wimbledon with all the different people who have been involved with the club over a number of years, from the time I was playing many years ago right up to the present day. Wimbledon is very much a supporters’ club. I was asked to come down to the club when it was restarted, and it’s fantastic to see the progress that has been made with the new stadium.

“I donated my three Southern League winners’ medals, which we won just before the club got into the Football League, and a Southern League Cup medal. I don’t want to sound cocky, but we changed the history of the club. When we joined Wimbledon was a struggling Southern League club, but when we left it was one of the most well known clubs in the country.”

Jeff Bryant, another key member of that successful Wimbledon side in the 1970s, added: “We love that the club has eulogised about our achievements, and it’s fantastic to come back and see that what we achieved hasn’t been forgotten. I think that’s important to us and the club from a history point of view."

WiSH would like to thank everyone who contributed to and supported this mosaic project, and looks forward to delivering on further heritage projects which will help to celebrate the rich history of football in Wimbledon.  The mosaic will be the first thing that people see when entering through the turnstiles in the stadium's Cappagh (West) Stand. This will help to ensure that countless special memories for fans and players will now be kept engagingly and vividly alive with pride of place at our Wimbledon home.