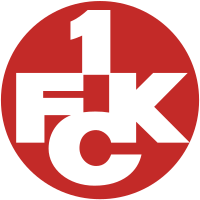 AFC Wimbledon were just edged out by an impressive Kaiserslautern side tonight in a well-contested pre-season friendly at Arena Weingarten.

A 23rd minute strike from Andri Runar Bjarnason ultimately proved to be the difference as Kaiserslautern triumphed 1-0 in front of a crowd of 980 spectators.

Heavy downpours before kick-off resulted in players from both sides temporarily taking shelter under the stands, but thankfully there was no danger of the game being in doubt. With Dons banners and flags held up proudly at the venue by our travelling fans, there was certainly a warm welcome from our German hosts as Wimbledon prepared for an historic match against a club that won the Bundesliga title in 1998.

Now in the third tier of German football, but making a determined effort to recapture former glories, Kaiserslautern started this match – their final pre-season game – full of attacking verve and our Assistant Manager Glyn Hodges felt it was exactly what was needed at this stage of preparations for 2019/20.

“The travelling probably played a part, but I thought we got better as the game wore on,” said Glyn.” Players that started got 75 minutes in and we move onto another game in Germany tomorrow. When you come out to place like this you never know how good the opposition are going to be, but I thought this was the perfect test at this stage of the season. They looked sharp as they are starting their season next week and the match provided exactly what we needed.

“Reuben Collins played the full 90 minutes and he did well, but it was also great experience for the young lads that came on, it must have been the fastest 15 minutes that they had played in terms of tempo. It’s been good for the youngsters to play in this environment so that they find out how to conduct themselves. The important thing is that we are trying to build a pre-season of having test after test. We have previously played against Wexford and two Championship clubs. This was another test and it could have gone either way, but we were pleased with it overall as it provided exactly what we needed at this stage of the season.”

There was plenty of early pressure early on from Kaiserslautern. Reuben Collins scrambled the ball clear, before Rod McDonald was forced to block a goal-bound effort. The hosts showed attacking fluency in abundance, putting together slick moves on the rain-sodden pitch. The first chance came in the seventh minute when Florian Pick marched through on goal after a good move, but Nathan Trott pulled off a fine save to keep Wimbledon level. At the other end, Wimbledon worked the ball well to create a shooting opportunity for Anthony Wordsworth and he struck a fierce effort that Kaiserslautern keeper Lennart Grill did really well to tip over the crossbar.

Wimbledon attacks were few and far between in the first-half and it was no surprise when Kaiserslautern marched into the lead in the 23rd minute. A cross from the left flank by Pick was not dealt with to give Andri Runar Bjarnason a chance from close-range and he made no mistake. The goal lifted Kaiserslautern with their supporters really getting behind their team and it appeared that the advantage had been doubled before the half hour when Pick swept home from close-range. However, an offside flag cut the celebrations short and meant that Wimbledon were still well in this game.

The Dons did respond and threatened to half the deficit when a good move ended with Scott Wagstaff denied by Grill. However, that failed to change the pattern of this match in the first-half as Kaiserslautern continued to sweep forward and Carlo Sickinger struck a free-kick just over the crossbar after Wordsworth had been booked for a rash challenge. Though Wordsworth, Wagstaff, and Jack Rudoni had shown moments of promise in midfield, they had not been able to get enough of the ball to put Kaiserslautern under sustained pressure. At the half-time whistle, Kaiserslautern deservedly led with their forwards having managed to find space in behind and on the flanks to make life difficult for Wimbledon.

It was better from Wimbledon at the start of the second-half and Adam Roscrow had a shooting opportunity, but his shot was too close to the keeper. A good move on the right ended with Wordsworth teeing up Wagstaff and he got plenty of power on his shot, but Grill saved well. Wimbledon had certainly upped the tempo at the start of the second-half and The Dons looked capable of conjuring up an equaliser at this point. Wimbledon had earned a much greater share of possession in the second-half. However, Kaiserslautern remained a threat on the break and Nathan Trott did well to deny Phillip Hercher and Kevin Kraus.

As the second-half progressed, Kaiserslautern exerted more pressure and they were very unfortunate not to go 2-0 up when Toni Jonjic fired against a post after Manni Starke had set him up nicely. The rhythm of the second-half was interrupted with 15 minutes to go as Wimbledon made nine substitutions. It offered great experience for Under-18s to face players with plenty of experience at a good level in German football and there was even a cameo appearance outfield for Nik Tzanev! The young keeper was forced into the action as a right midfielder after Finlay Macnab had to go off injured.

Though Wimbledon were unable to find an equaliser, it was a more than useful pre-season work-out against a good Kaiserslautern side. Next up, it’s another German challenge with Kickers Offenbach providing the opposition on Saturday.

There’s an international flavour to AFC Wimbledon’s pre-season schedule with two matches coming up in Germany next month and ticket details are published below.

Wimbledon take on former Bundesliga Champions Kaiserslautern on 12 July, before facing Kickers Offenbach a day later, as part of an exciting double-header.

FC Kaiserslautern are currently in the third tier of German football, but they boast a rich footballing heritage and they still have an average gate of around 23,000. The club’s illustrious list of former players, including Michael Ballack, Miroslav Klose, Andreas Brehme, and Hans-Peter Briegel. Kickers Offenbach, based in Offenbach am Main, are another former Bundesliga club and they currently play in the Regional League South West (fourth tier).

New signing Adam Roscrow (pictured) gave up the chance to play in the Europa League qualifying round to sign for us, but now he gets a chance to play for The Dons in Europe!

Here’s a guide to how you can get your tickets, plus travel information:

Get on board for an exciting Dons on tour with Wally and the boys this summer!