Supporters that followed Wimbledon back in the 1950s will be saddened to hear about the recent death of Terry Dobbs, who helped the Dons to cup success during his playing days.

Mick Pugh, Secretary for the Wimbledon Old Players’ Association, has put together the following tribute to Terry.

Born in South West London, Terry attended St. Mary’s School, on Clapham Common, where he excelled at sport. His first senior club games were with Putney Athletic and he became an established player until National Service saw him serving in the R.A.F. at Wittering Air Force Station, where he gained representative honours and played against the national British Army side. Following his demobilisation, he returned to the Putney Heath club, while working locally as a clerk.

Terry became a Wimbledon player at the start of the season 1954/5 and he was able to play on both wings with injury having kept more established players out of the team. He stayed until the end of  1955, appearing for the last time in the victorious team that won the Surrey Senior Cup, beating local rivals Sutton United, 2-1 in an exciting game. 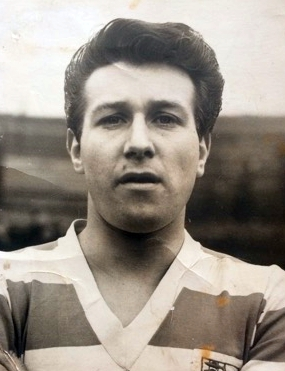 Terry left to join Bexleyheath and Welling, before moving on to Dulwich Hamlet and it was here that he really made his mark. Dulwich were a fast-improving side and he won the Surrey Senior Cup twice, along with a couple of wins in the London Charity Shield. He won representative honours with the Isthmian League and then moved to Kingstonian for the 59/60 season. He moved again to Leatherhead for the following season, before playing for a very talented Enfield side.

On 13 May 1961 Terry was again involved in the London Senior Cup Final, played at Arsenal’s Highbury Stadium, against Wealdstone, and he once again he received a winners’ medal, Enfield winning 3-0. Terry stayed until the end of the 1962/3 season, and then followed spells with a series of local sides before he ended his fine career. Hayes, Carshalton Athletic, Malden Town, and Finchley were among the other clubs that Terry represented.

Terry was 87 years old when he passed away in December and many of his friends and those that knew him at his former clubs paid warm tributes to a very charming and friendly character.